Identification of a tiny, worm-like insect/parasite

I noticed small insects in my flower pot that I would like to know more about. They are usually extremely small (1-3mm); slightly resemble either minuscule caterpillars/worms of a greenish-yellowish tint, but the smallest ones resemble moving pieces of hair, grey or translucent - not longer and bigger than a hair clipping from someone shaving a two-day beard.

I tried to capture a yellow one - the biggest one I could find, here (in the middle of the image):

some of the others, smaller ones look like this (sorry for the low quality, I would need a microscope to get a proper image!): 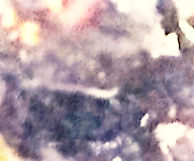 Although they kind of remind me of a horror film ("Body Bags", 1993), I am not particularly scared. But I would nevertheless like to know:

-what these insects are called

-whether or not they are parasites and will hurt the plants

EDIT: The pot was bought at Whole Foods in California, originally had Mint in it. The mint died and I placed poppy seeds in the pot which started to sprout. I also recently tried to plant some fennel I picked in a field, but I don't know at what time these bugs appeared.

The transparent wormlike things may well be fruit fly larvae - the yellow ones not sure what they are, but I'm willing to bet they came in on the fennel you tried to transplant into the same soil in the pot. Fruit flies like damp soil, so if you've been overwatering, that would explain their presence; the flies may originally have been attracted by fruit indoors, but they'll lay their eggs in damp soil, the damper the better.

To be honest, I'd dump the whole lot outdoors, wash and sterilize the pot and start again with fresh potting compost if you want to grow something indoors, especially as it doesn't sound like you've got much growing in there currently. Or just buy another pot with a herb of some sort already growing in it. Given the mint died, bear in mind in future that it's not a good idea to reuse the same potting soil for new plants where this has happened, especially not in a kitchen.

On the subject of fennel, assuming it was Foeniculum vulgare, grown for its leaves rather than roots, this plant has a very long tap root, so won't do well in a shallow pot, nor indoors on a kitchen windowsill.

I am going to say more or less the same thing. Given the mint died and these guys appeared, they can't be good, even if they are harmless. We will need either an entomologist or someone specialized in agriculture to say exactly what worms they are. Posting on the Biology Stackexchange with close up shots might help.

In the meanwhile, I'd dump the soil. If you wish to reuse it, you should removed the worms/larvae and let it dry outside in the sun and it is best not reused for food. If you want to keep searching for their ID, I'd say, put the pot in a sealed container with air holes, away from the kitchen.

Lastly, my thoughts on Fennel are as follows. If you are in CA, don't try to grow them. They are nastily invasive, taking over space from native wildlife in large swaths. Just buy the fennel you need, hopefully imported. While there is some lingering doubt about culinary varieties, if you picked it in the wild, it is most likely F. vulgare.

Here are some notes: http://www.cal-ipc.org/ip/management/plant_profiles/Foeniculum_vulgare.php

If you are not from CA, check locally if this plant is a threat to native wildlife there before planting or seeding.

5
Fig tree mystery worm problem
3
Which is preferred: worm castings or worm casting tea?
5
Why build a worm bin? Why can't you have a worm heap?
5
Should I Switch to a Worm Composting Tube?
3
What kind of worm is this which lives in the soil of my potted mango tree?
4
Small parasite wasps around the soil
1
Is this tree a parasite?
2
How to use worm castings indoors?
3
Tiny grey larvae(?) in worm bin leachate
2
Lilac Bush - A parasite of some sort? How to treat?