What techniques can be used to manually sieve stones from the soil efficiently?

After our house was built there is quite a bit of hardfill (river pebbles) mixed up with the topsoil around the section (approx 180sq.m.). We want to level the section, and loosen the top layer of soil to ready it for laying a lawn and growing a garden, and we're wondering what to do about the pebbles.

We understand that leaving too many stones in the soil will reduce the capacity of the soil to hold moisture and can also prevent tree roots from forming normally so we're considering sieving the soil somehow. It sounds like the local landscaping contractors can't help us with sieving, so I suppose it will have to be done manually.

We'd be happy if we could remove any stones with a diameter of 20mm or more.

Ideas so far include:

I would really appreciate any other ideas, or accounts of what's been tried and has proven effective. Thanks!

[Edit] Have added a photo to give an idea of what we're dealing with. This soil was dug up and scattered around the left side of this photo by contractors putting in the fence post to the left. 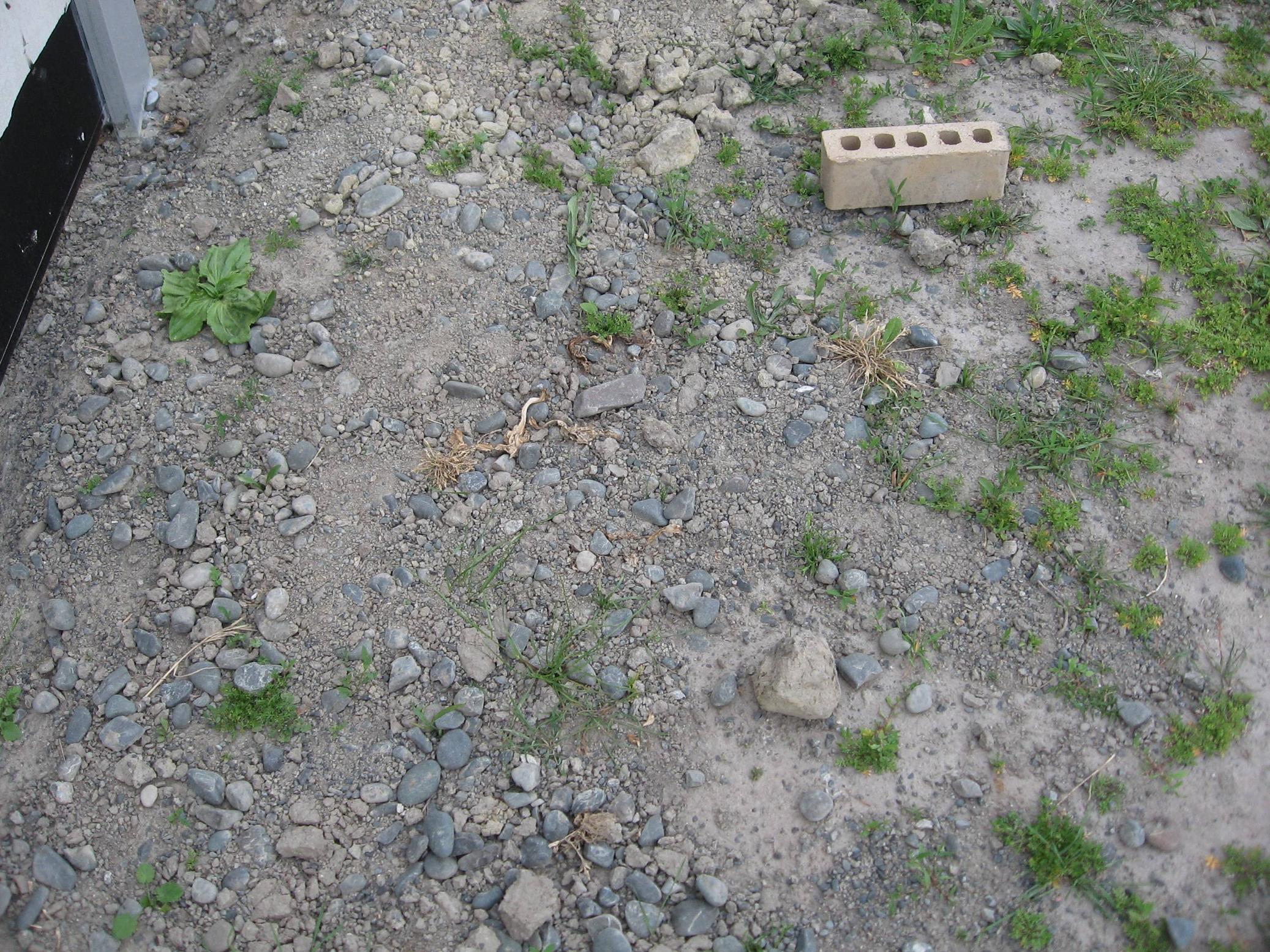 The wooden frame you describe is what I use, but instead of chicken wire I use hardware cloth (wire mesh). I have one frame with 1/4" mesh and one slightly larger (3/8"? -- I think 1/2" would be too big)). My large frame measures about 3' square, the small frame is built to fit over a specific bucket and measures about 15" square.

The biggest problem with frames like mine is that you have to physically shake them by hand to get the soil to shake out. If I was going to build another one (and I likely will), I'd make it maybe 2' wide by 4-5' high so that I could set one end on a sawhorse and toss material onto it with a shovel. The material (rocky soil, compost, etc) would "roll" down the face of the screen, the fine material would fall through and the large material would stay on the front.

If you didn't want to build a frame, I've seen people just throw a section of hardware cloth over a wheelbarrow and toss material onto it. Looks like more ongoing work though -- I think you're better off building a frame.

If you're a bit handy with carpentry, I've also seen frames that are built on a stand that has a couple of levers so that you can toss material on it and then grab the handles to shake it out. I think I saw it used at an archaeological dig site, but from what I could see the construction looked fairly simple.

A couple of things that I didn't mention above:

This site has some photos of a simple frame sieve like mine. He built rails so it's easier to shake. (I've used a pair of sawhorses as rails instead of building a special jig.)

Here are detailed plans for a simple frame.

This one is on a stand as suggested by Ed Staub in a comment below.

Soil is nothing more than little rocks...plants do not have a problem with a few large rocks. I've seen expensive, custom-made soils that were made with a significant percentage of pea-gravels. My rule which was made by someone else is to toss any rock larger than my fist out of the garden. No matter what your soil composition is, the only way to improve it is to add DECOMPOSED organic matter...and just put the mulch ON TOP. The soil organisms eat the stuff and crawl back into the soil profile, pooping matter out, mixing it into the soil for you.

Gotta relax a bit...sifting soil is awfully un-fun and humans don't like repeats of un-fun things-to-do. A few rocks is no big deal. You are going to need an awful lot of DECOMPOSED ORGANIC MATER to mix into your soil...hopefully it isn't all rock and no true soil. That would be another problem altogether.

Watching Monty Don, when he was in Italy, their soil was very stoney. This helped with drainage, aerating the soil. The stones also warm up and hold the heat like little storage heaters overnight. This didn't affect the quality of their produce. So all stones are not bad. If you want a bowling green lawn or grow root veg, they need to go, if you want to grow fruit bushes and top fruit they're OK. Get rid of the ones you need to. So all in all, you may not need to get rid of them all. You can possibly use the waste stones for paths.

Why do most people take the hard way for this task? Flat and shaking - I shake my head at that...

All you need to do to make this relatively easy and efficient is build a LONG screen frame (mine is about 8 feet - 2.5 meters long by 2 feet/60 cm wide) and prop up one end at an angle (I have legs that hinge attached at the top) so that soil shoveled onto the top rolls down the screen. If the soil just sits there, it needs to be steeper. The smaller stuff goes through, the larger stuff collects at the bottom, no shaking, pushing by hand or effort beyond shoveling the soil is required. Sometimes one does have to pause and pick out a few rocks that are oddly shaped and stick in the screen mesh.

You can buy shovels with lots of holes in the blade. And probably you could make one from an ordinary shovel, using a drill. However I think soil would sift more easily through screen, and that would be important if you had a heavy shovelful.

I'm thinking about cutting out the middle of a shovel, replacing it with screen. Digging, sifting, and dumping rocks would be more or less continuous.

9
Is the "Paris Market" carrot a good variety for clay-rich soil?

7
How can I improve the quality of soil after using newspapers to kill the weeds?
5
What is the scientific term that describes soil that resists water?
10
How can I prevent stones from rising to the soil surface each year?
4
What can be used as plant media except soil?
6
What to do with uprooted grass & earth?
6
Can urine return moisture-holding capacity to the soil?
4
What should I add to the soil to make my hydrangeas blue?
4
Can I improve clay-like soil with little stones?
1
Ideas for removing stones and from soil
0
Can the soil data maps from soilgrids.org be useful for a gardener?