How can I propagate mint?

I bought some mint twigs from the supermarket, and I needed only a few leaves. The rest of it was surplus, and I didn't want to throw it away. Knowing that mint is an invasive plant, I assumed it was hard to kill and could reproduce from basically any part of it, so I tried to put the twigs in water to see if they would produce roots. After three days, most of the twigs appear to be dry and dead. A small number of them, however, till have some leaves that appear healthy, so I still have hope. No roots though.

I have two questions:

Mint is typically propagated, as you correctly say, by runners (or stolons). Stolons are longish horizontal parts of the stem that can either grow along the surface or underground and connect two vertical stems. Here's a picture of a mint stolon from this site

(I'll replace this with pictures from my plant when I get the time). 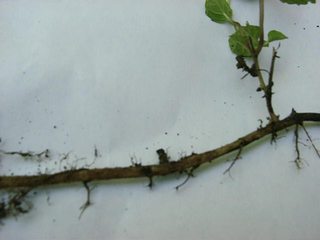 It's the stolons that have the ability to put out both shoots (upward stems) and roots from the nodes. The upright stems do not have this ability and so if you only have mint stems from the grocery store, they're probably never going to grow roots.

The reason that you saw some of them remain fresh is because the xylem, which is the plant tissue responsible for upward water transport, might've still been alive and hence would've been transporting water to the leaves via capillary action. However, it cannot sustain itself this way, and without a corresponding upward transport from the roots, the capillary pull cannot balance the water loss from transpiration in the leaves and eventually they'll dry. Slowly, but surely.

I've not tried to get a stolon to root in water, however, I wouldn't be surprised if it did, although it's not really a common way of growing it. To propagate it effectively, you need a good section with a bit of root (not necessary though), part of the stolon (a must) and some shoots with leaves (to nourish the plant when it's establishing itself). Although highly uncommon, some varieties are propagated by seed.

Regarding its invasiveness, you can contain mint by growing it in a pot. That way, eventually it will get root bound, which then determines its maximum size. If you plant it on the ground, you better be making lots of mojitos ;)

Cut a little stem and pinch off the bottom set of leaves. Then place in a clear glass. Roots should start to form in about 4 days.

What worked from me given a newly-established (less than six month old) plant was:

I planted three cuttings like this. One got mysteriously avalanched in clay soil; of the other two, one survived (lots of leaves). The other didn't (leaves got eaten).

Not the answer you're looking for? Browse other questions tagged propagation mint or ask your own question.

27
Which leaves should I harvest in a mint plant?

27
Which leaves should I harvest in a mint plant?
6
How often can you produce cuttings from mint?
6
How can I propagate Pachira?
6
How to grow a new Opuntia (prickly pear) from a cutting?
2
Is it safe to change the soil completely for mint? And is it bad for the plants that the roots are sticking out?
3
How long can the runners on mint plants be?
6
How can I propagate a baby spider plant?
6
Can I propagate a healthy plant from one that has a White root rot disease?
4
How to amend clay soil to propagate trees for bare root distribution?
2
Is it too late to top this cayenne chili plant?