What type of pepper is this?

I have a pepper plant and I don't know what variety it is. Maybe someone can help me identify it. Some details about pictures and plant: 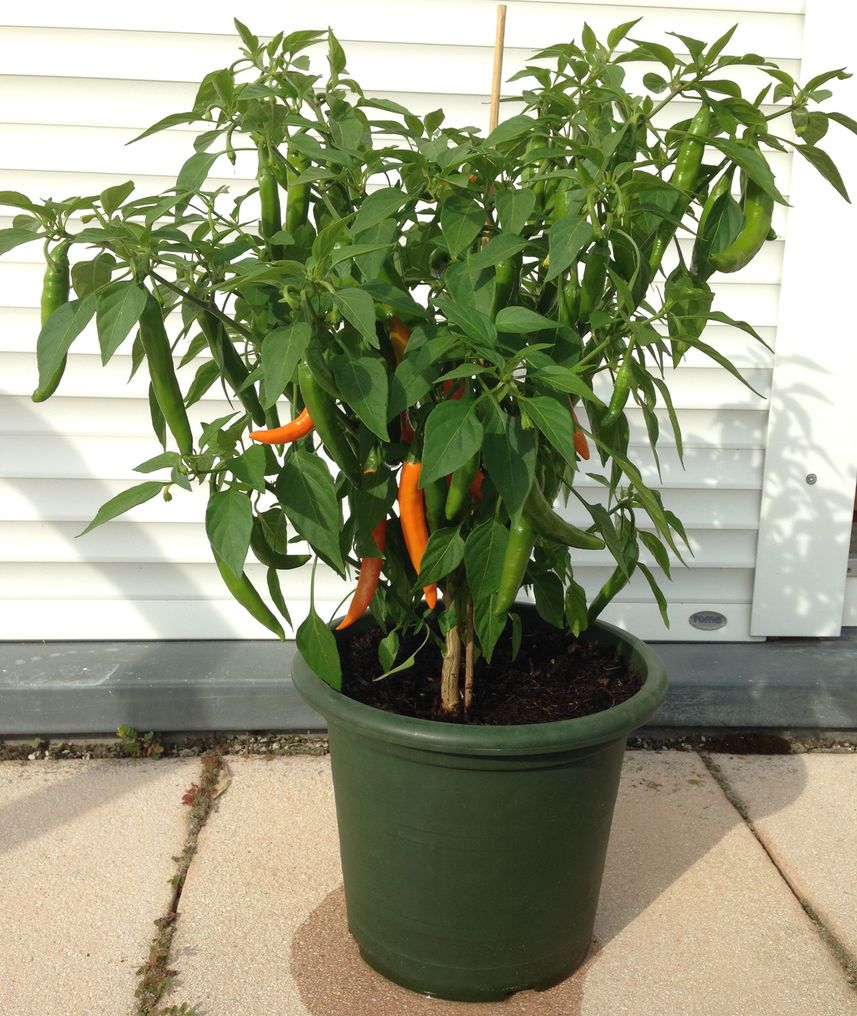 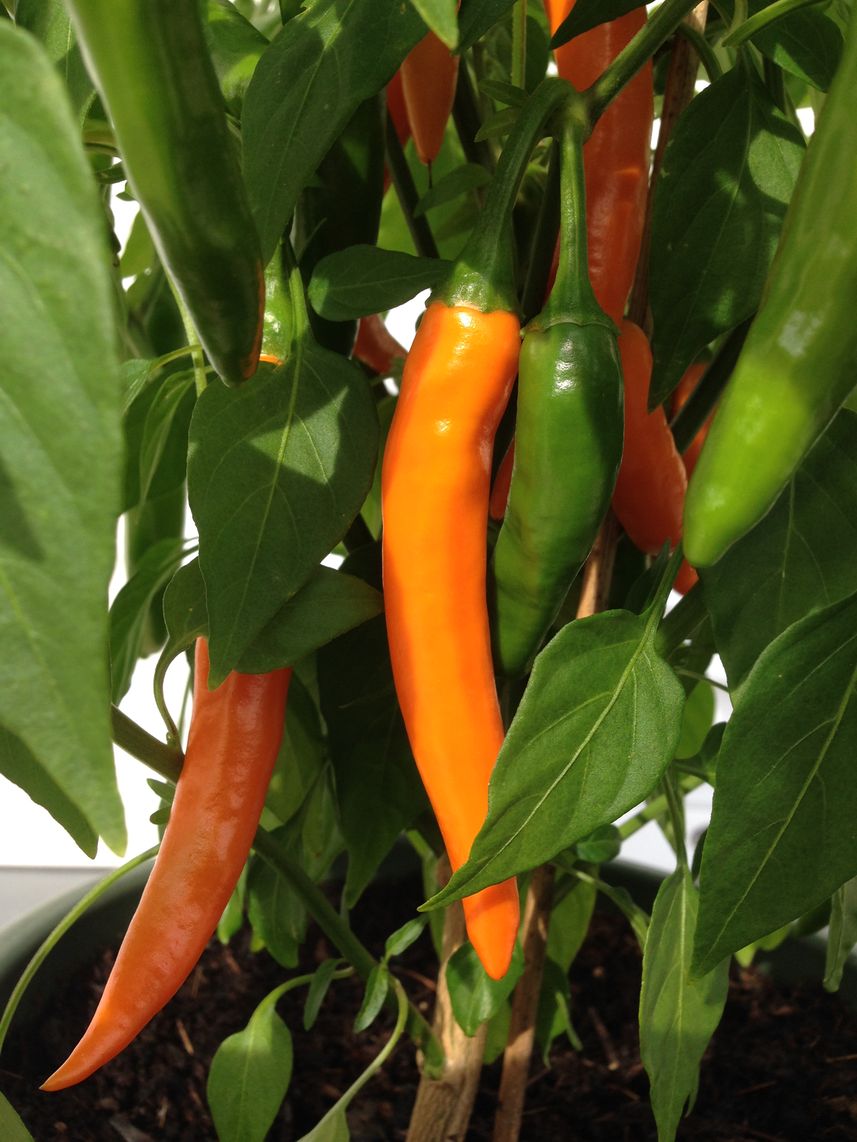 I have a second plant that I think is the same variety but it's fruit ripen from green to bright yellow: 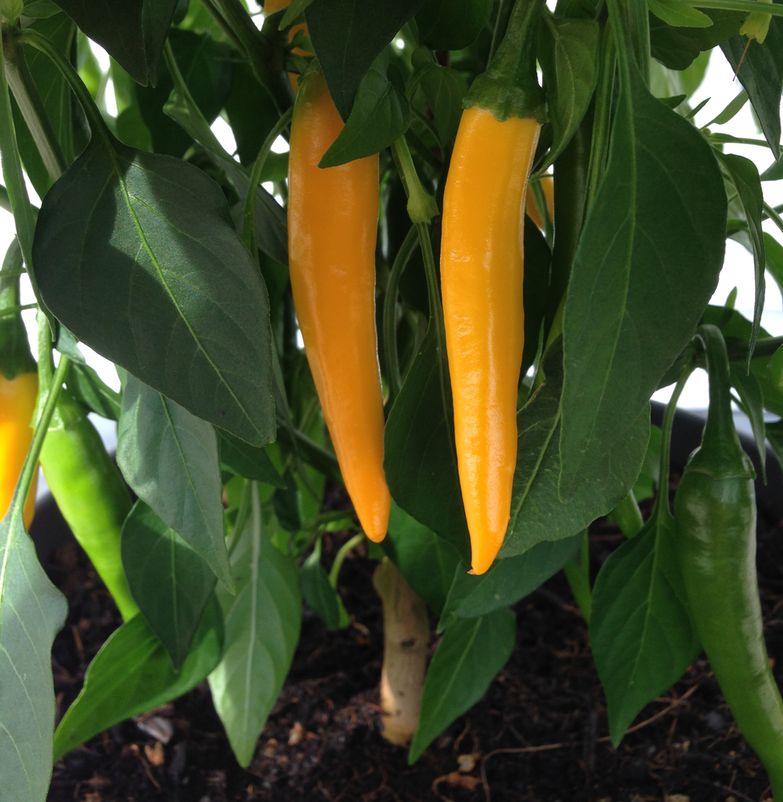 I can provide additional pictures/information if necessary.

It could be any of countless varieties, since there are thousands of kinds of peppers. However, it could be a Bulgarian Carrot chile pepper (do an image search), by the appearance and your heat description. Some people think they're very mild, but some think they're extremely hot. I saw a YouTube video of a couple guys who tried them, thinking they would be about as hot as a jalapeno. You could really tell they were in pain. The variable heat could be due to growing conditions, but there are other factors.

Another noted similarity is that they start green and then turn orange. (Many peppers start yellow; so, this is good to know.)

The only other pepper I'm personally familiar with offhand that it sort of looks like is Randy Sine's Evil Jalapeno F3, which is still not stabilized and can be orange or red, depending on which seed you use. By the look of it (from my peppers; not the picture), I would guess it's part Bulgarian Carrot, personally, but it has an amazingly good jalapeno taste (and depending on the pepper it can have next to no heat, or be super hot). With these, they go green to orange, and when they're more ripe, the orange turns a bit more yellow to my eyes. I know the picture in the link I gave doesn't look much like your pepper, but my peppers that I grew this year look similar (from one of my plants; the other plant has red peppers). Bulgarian Carrot is a much more likely match, however.

Yup need more scale but I am pretty sure this is either Serrano or Cayenne peppers. Did you plant this from seed or from seeding out of a store? What size pot is that? 6" or larger? Then not cayenne. Another one of us on this site will know, just send something for scale.

I agree with Shule!! Out of all these PEPPER varieties, this is what I was going to suggest. Here is a great site to check out...need to see and bisect the flower for positive ID on variety but when I saw that Bulgarian Carrot I saw the resemblance...yummm!!

lots of pics of peppers to purvey and pick

Not the answer you're looking for? Browse other questions tagged identification peppers or ask your own question.

7
Keep plants alive and healthy, but at a reasonable size?
5
What is this small annual with narrow gray/green leaves and rust colored daisy-type flowers?
4
What is this bush with small yellow flowers and an orange substance in the stems?
3
What is this prickly, burr-covered plant with different colored flowers on the same plant?
7
Scorpion Pepper growth
3
What is this bright red wrinkled pepper?
11
Growing multiple pepper plants in one pot vs just one plant per pot
5
Why are my snack peppers wilting?
2
Why does this chili pod have spikes?