I need help identifying a beetle I found in my garden. I've never seen them before, but suddenly today there were many of them crawling around my russet potato plants. They were quite active and walking all over the place. What are they, and do they pose any threat to my potatoes or other plants? 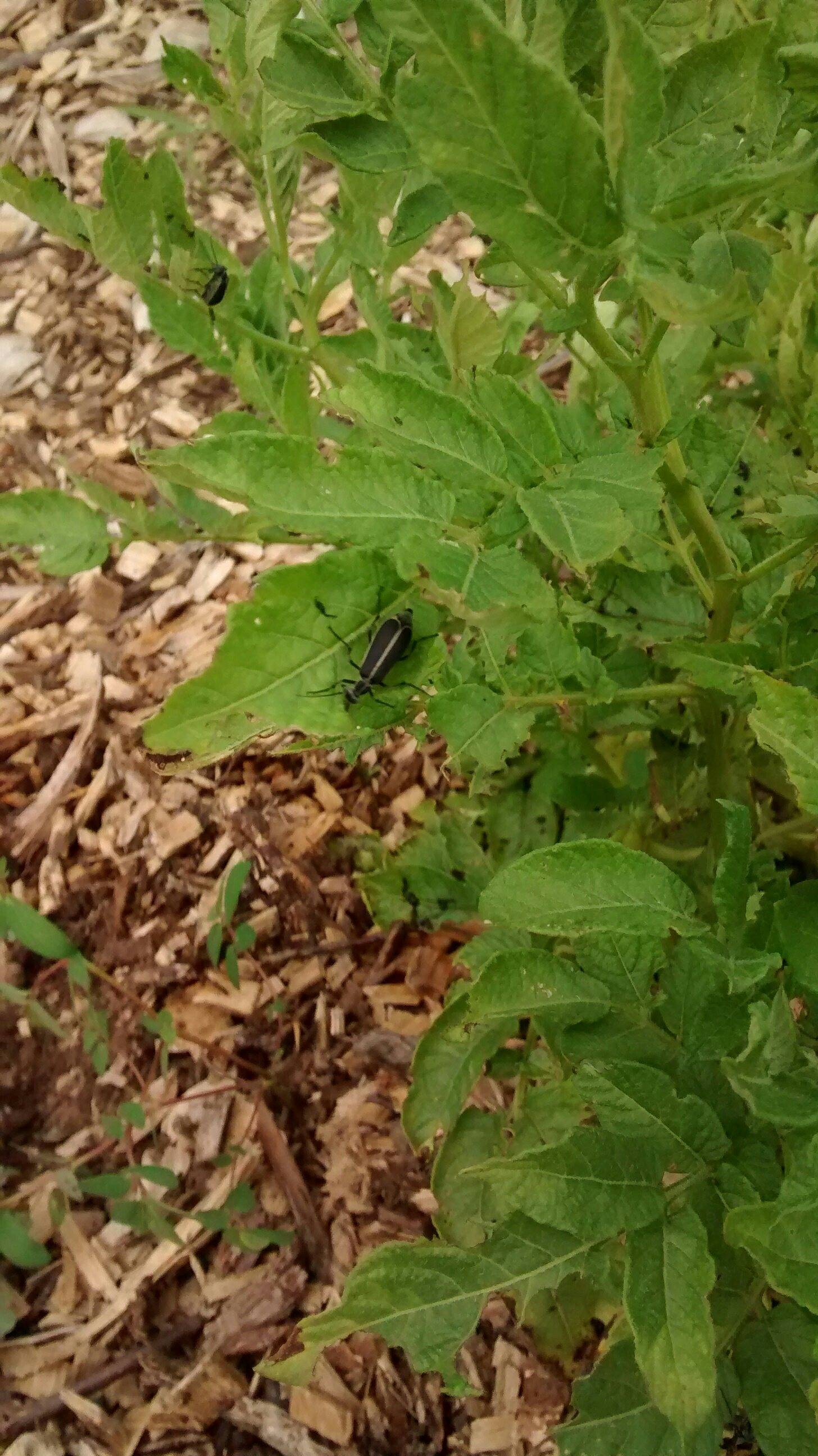 They will chew up the leaves, and not just on your potatoes. They are toxic, so just be careful when treating them! More information here:

Blister beetles are a common field and garden pest best known for the welt-raising secretion they release when injured or crushed. The secretion contains a blistering agent known as catharidin, a substance used to treat the lesions caused by pox virus. Catharidin is so effective at destroying tissue that it’s used in wart removal products.

Humans who ingest the pest can expect severe damage to the urinary tract and gastrointestinal lining. Keep an eye on children who put things in their mouth if blister beetles may be present.

In addition to the threat presented by its toxicity, the beetle does damage to both garden and commercial plants, consuming a variety of leaf crops, plant blossoms, landscape flowers and hay crops.

Come July, a garden can be suddenly over taken by hordes of leaf-munching beetles. They usually work in large clusters, gathered on the edge of potato patches and lettuce rows. It’s best to remove as many beetles and the plants they’ve damaged as soon as they’re spotted and before they spread. Once well-established, they are almost impossible to eradicate completely, even if chemical or other toxic sprays are used.

Hand-picking can be effective in home gardens, particularly when their numbers are low. But never handle blister beetles with bare hands. Always wear gloves. Brush the beetles off plants into a small container with some soapy water. If shaken from plants, the beetles will often lie in the dirt and play possum rather than scurry away. Take advantage and gather them carefully.

Not the answer you're looking for? Browse other questions tagged identification pest-control insects pest-damage or ask your own question.

4
What ate the leaves of my bell pepper plant?
5
What sustainable and affordable way is there to control rose chafer beetles?
4
What's this? Vine with heart-shaped foliage and green-to-black fruit (Identified: Creeping Cucumber)
6
What is this black bug, how to control?
10
What are these long, mostly translucent worms in my potted trees?
7
Help with caterpillar identification
1
Help me identify this bug with red belly hanging around garden pots
3
Is this Viburnum Leaf Beetle?
1
I noticed some tiny white bugs on my Calathea, could they be responsible for this?
2
What kinds of larvae/maggots/worms are these?