I suspect the answer is yes, because they are the most diverse group of cacti.

The reason I ask is that we actually have four varieties/species and I'm having a lot of trouble identifying them! The better cacti books that I can find typically only list the dozen or so of most common/notorious species and finding matches has been difficult.

Of the four we have, two are almost certainly cultivars:

The two wild ones are:

I guess at the end of the day it is idle curiosity. All can tolerate our frosts except for the Mexican variety which can only handle the milder winters. The local one has had flowers. The cinnamon grows very well and is decorative.

At Shane's request here are a couple of pictures from back in April. We had a small cactus bed which was greatly expanded at the end of March into quite a big xeriscape bed - these pictures are only a few weeks later, so things still look a bit bare. I've since thinned out some of the cinnamon opuntia and the "hummingbird plant" (sorry can't remember the name, the Misses bought it - it went very bushy this year, has red long, small flowers. liked by insects and hummingbirds, likes droughts). I added three agaves at the weekend, and a low,creeping sedum to replace one of the phloxes that died (2 out of a dozen dieing isn't bad).

The red yucca produced a flower bud, one week after it was planted! It is still flowering. 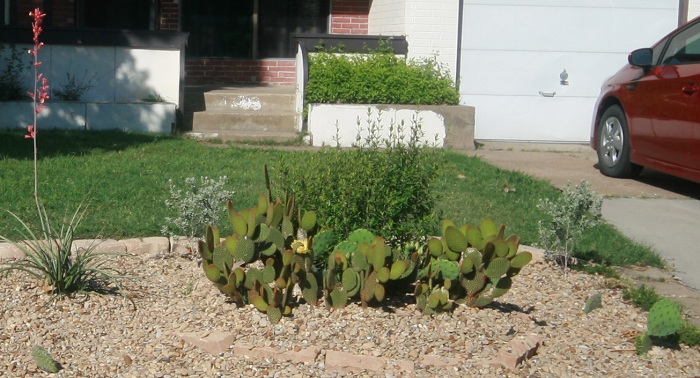 Here is the right end of the xeriscape bed, this is centered around the old cactus bed. The red yucca is on the left. Mexican sage at the back. The bulk of the cacti are the "cinnamon bunny ears". These grow very well. Pads are quite small, no spines, but lots of hairs - old pads are also furry. In the middle of that, flowering with the yellow flower, is the local opuntia (saved as a 'weed' from a tree planting event). This has had a few flowers, so I'm hoping for tunas later in the year - perhaps gifts when I return to the UK if I can get them through customs :-) First time I've had an opuntia flower.

The Mexican opuntia was down to one plant after this winter and was broken into individual pads. One is in the lower left (and has since died). There's a strong one hidden from view, and another single pad on the right.

Also on the right (with two pads) is the spineless opuntia from the nursery. This was recently purchased and has just put its first new pad out.

Here is a close up of the middle: 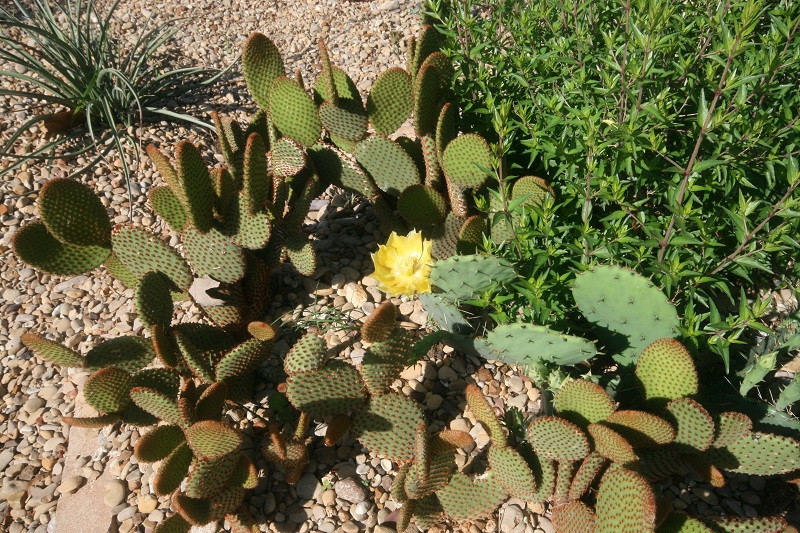 The opuntia in the middle with the yellow flower is the local 'weed' opuntia. It is surrounded by cinnamon opuntia which are 1-2 years old. The plant at the back and the cinnamon opuntia have since been thinned, giving the local opuntia some more space.

It doesn't show up on the top photo, but there's also a mammary cactus hiding in the lower right. This also had flowers only a few weeks after planting, but they were a dull straw color. Unlike opuntia, it was a little pricey so we're hoping it survives!

You sparked my curiosity, so I looked it up. Here's what the wikipedia article on opuntia says:

Opuntia hybridizes readily between species. This can make classification difficult.

It cites the following abstract as research on the topic: The origins of an important cactus crop, Opuntia ficus-indica (Cactaceae): new molecular evidence

I hope this helps!

16
How should I repot these overgrown and delicate plants?