What are these woodlouse-like bugs and how do I kill them?

I have these black woodlouse like bugs that infested my whole back yard. They are eating through many of the leaves in our garden and wreaking havoc. 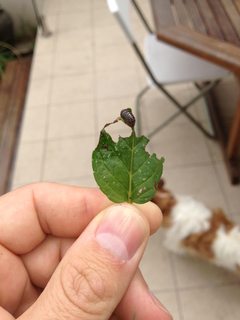 What kind of pesticide / approach can I take to eliminate them or reduce their number? Preferably I would like a non-chemical solution.

I strongly suspect that it's a "pill bug" (in the Armadillidiidae family). One of the very distinguishing features of these bugs is that they roll up into a ball when disturbed, as a self-defense mechanism. The one in your picture seems to be doing that (although, half-assedly), possibly irritated by some bloke moving the leaf around and positioning it for a picture.

then the chances of your finding these bugs are quite high. The simplest way of controlling them would be to change the above conditions so that they don't like the surroundings and leave on their own.

I usually ignore these in my garden, and hence cannot recommend any pesticide organic or otherwise. However, I highly doubt that any of them would actually be effective, as these creatures have a protective shell on their backs that would prevent/delay penetration of the poison and also, they're not exactly the type of pests that commercial products are manufactured for.

Prevention. I've had the same kind of weird problems when we've had earwigs in the garden in the past. The underlying cause, I believe, was mulching or top-dressing with compost that was too woody, providing good living quarters and a resulting population explosion. When that happened, they started eating foliage, which they don't normally do.

I suspect you've done something similar - a lot of rotting woody material on top of the soil providing a good home for these guys.

Even if you use non-woody mulch, keep it away from seeds and seedlings.

Not the answer you're looking for? Browse other questions tagged identification pest-control bugs or ask your own question.