Can I grow wild white or other types of clover in an outdoor container?

In the spring, a number of wildflowers, such as dandelions, buttercups, and some lovely purple things, pop up in our yard. I'm in Massachusetts, United States, so that means April and May. Others appear later and stay through the summer.

Each year we're blessed with up to three generations of bunnies out there. Although they eat a wide variety of things, they seem to prefer something that looks like white clover. I think one reason is because it lasts longer than the rest. For instance, it's mid-July right now, and most other things have already gone by, but that clover is everywhere.

We try to leave it for a while, and when my husband mows the lawn, he avoids some spots so as not to interfere with the needs of the rabbits. However, there does come a time when he really needs to mow the whole lawn, and all of the clover tops are lost. Also, at some point they do go by, and all the bunnies are not yet fully grown.

Is there a way to grow that, or a similar type of clover, outside in a shallow container? It has to be no taller than 3" or so in order for the littlest bunnies to reach, but can go up to 6" or more for the older ones. Picking the clover itself is not an option, because once it's been pulled out of the ground they don't go near it.

For all those who think that bunnies are annoying and clover's a weed, I'll start by saying we love both, and this is a genuine request! 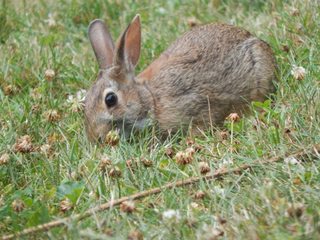 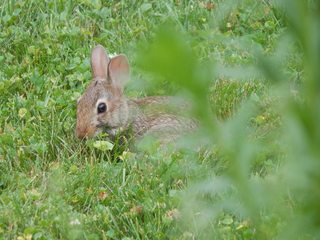 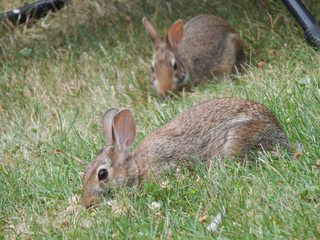 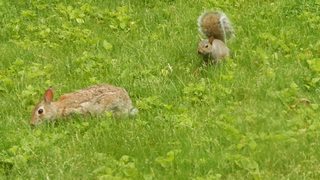 I planted clover to open up an area of heavy clay and rock. It took quite well to it. So much so that it has seeded between the flagstone pavers. So the habits of the plant should lend itself to this:

This all happens in full sun conditions so your experiment should work if you have that and any old soil as long as it drains freely. It might take a year or two to establish.

A container would probably work even better if you can use a deeper container and sink it into the ground so it is level with the grass.

Rabbits like clover because it is a high protein forage, and it doesn't take as much to supply their needs. I've found that clover will pretty much grow anywhere it get get roots (as long as it's well drained), so yes, if your tray is drained they should grow

However, if you want them to self repair (regrow) quickly after 'harvesting', you want nice soil, at least 6" deep, and keep it moist. In that condition, White (Dutch) clover will thrive (I remember having to control it in plant trays back at the nursery).

I'd even go as far as using a potting mix, as that'll drain so much better than soil, in a shallow tray. Just make sure it stays moist, and fertilizing it with something natural would be a huge help.

Not the answer you're looking for? Browse other questions tagged containers wildflowers rabbits or ask your own question.

12
Will a galvanized container leach Zinc and “Trim” the roots? Are there other effects?
14
Can I use a clear glass as a container for houseplants?
5
Can I drill drainage holes on the side of the container?
3
Is it possible to grow a grape plant in a container?
8
What flowering houseplant can I grow in a ceramic container with no drainage holes?
6
Can I grow asparagus in a small container?
3
What is this prickly, burr-covered plant with different colored flowers on the same plant?
5
How should I store wildflower seeds embedded in a piece of cotton, for several months before planting?
3
Can you grow (and keep) a large maple tree in a container?