Should I prune this new olive tree?

I planted this tree a few months back and it's been growing rapidly in the summer sun here in Cyprus. We have average daytime temperatures of around 40 degrees C (104 degrees F) at this time of year, and will for another two months or so before things start to cool down.

Should I be pruning this tree at this point in its life? I don't want it to get too gangly or take over the garden, and I eventually want a tree that has a canopy that I can walk under (to access other parts of the garden), so I'm eyeing the lower shoots as candidates at this time.

Can anybody advise me on this? 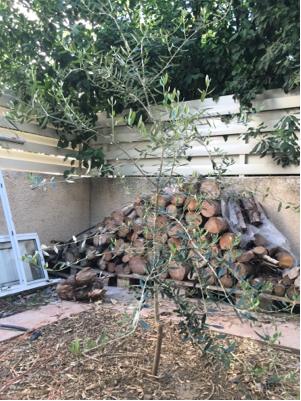 UPDATED: As some have requested them, here are some more pictures to make it more clear how the tree is growing. Apologies for the state of the garden in general (work in progress). 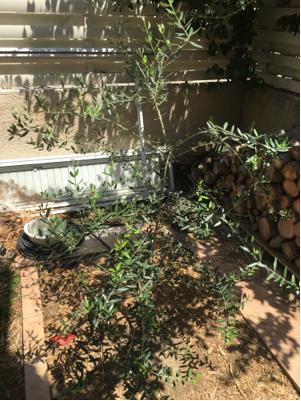 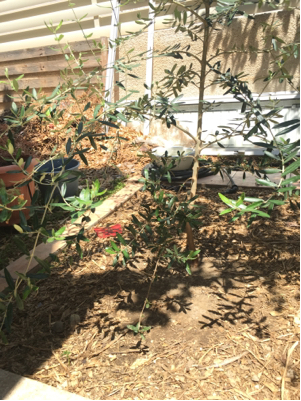 I was also advised to expose the top set of roots. A local cat and her kittens have done a pretty good job of it, but I've made sure they're exposed. Is this good enough? 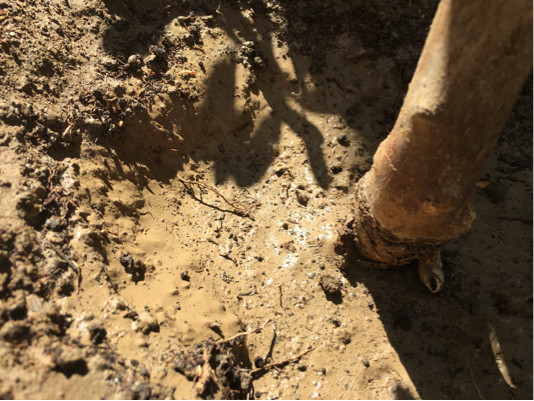 All I've exposed so far are the thin, spindly roots. I used some water to soften the soil. Thanks for the input on this. To answer a question, I'd love a tree that gives both shade and fruit, if possible.

Well I would, taking off the lowest branches certainly, and possibly the next tier, although the picture isn't very clear when it comes to judging which branches are coming from where in the lower parts. That would still leave some halfway down, but as the top is a bit sparse, and it's already July, I'd leave those in place till next year and remove them in late spring, or when the weather has warmed and growth is happening (which might be early spring where you are).

Cover those thin roots back up immediately - they should not be exposed like that. I think the point someone else was trying to make was that any mulch laid over the top of the soil should not be in contact with the trunk of the tree, but it's absolutely not a good idea to expose fine, thin roots like the ones in your picture. Don't allow the soil you replace to sit higher against the trunk, that's the only thing to watch for, along with the same rule for any mulch you choose to use. Much later on, as the tree matures, you may find large roots appearing above ground of their own volition (hopefully not because all the soil's been washed out by torrential rain, I don't mean that) and those roots should not be covered up. This, though, is unlikely to happen for some years.

Otherwise, my advice remains as above, that is, to remove the lowest tier of branches now, leaving any other pruning/shaping for next year.

Not the answer you're looking for? Browse other questions tagged trees pruning olive or ask your own question.

9
How I can persuade an olive tree to flower?
11
Is an olive tree frost resistant?
6
How to grow an olive tree?
5
How should I prune this grafted lemon tree?
5
About how big will this olive tree grow?
1
Can I get fruit from an olive tree in the UK?
4
Tree identification and problem diagnosis
1
What is wrong with the small olive tree?