Why Do I Have Stunted Corn?

My corn patch has resulted in mature plants that average only 2 ft. tall and tiny ripe ears. The kernels on the ears are full size (but the ears are not filled out). Water has not been an issue nor has disease or insects, which leads me to believe there is a soil deficiency.

This is my first corn planting in a raised bed which has a mixture of crappy sandy fill I mistakenly bought, some heavy clay soil from the ground that I mixed in (corn from the same seeds grew well directly in my ground soil a few years back), and a few bags of fertilizer enriched compost I bought from the store. Tomatoes are growing well in the same raised beds. I know... why did I bother with a raised bed,? I am asking myself the same question!

I realize there are probably lots of potential reasons, but I would like to know the most likely/most common reason(s). 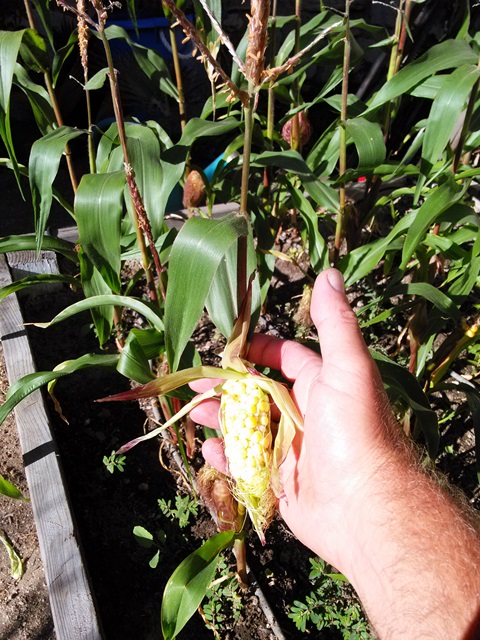 Stunted corn sucks. Soil needs to be top notch and the climate perfect for corn to grow. Corn is known as a devestator of soil nutrients. You need to use fertilizer when growing corn.

They suck dry the soil and basicly make it barren, so keep that in mind.

Not the answer you're looking for? Browse other questions tagged vegetables soil corn or ask your own question.

7
Why does a corn cob turn black?
2
What are some good combinations of plants & practices for raised beds to maximize efficiency/output?
5
Why did my tomato plant stop growing after transplanting?
4
Can I train a Ground Cherry to climb a trellis or something else to get it off the ground?
3
Do I need to remove all of the small unknown roots from my raised bed?
4
setting up raised garden beds for spring. what is best mix but affordable?
3
Crop rotation: by season instead of by year?
1
Why are my yellow cherry tomato plants not growing or getting more fruit
2
Factors to consider when choosing between Perlite and Vermiculite for improving drainage in raised beds?