What is this low-growing plant with fuzzy green and gray leaves, and when can I transplant it?

I found a number of these plants tucked behind peonies, bleeding hearts and other perennials. They're primarily up against my cement foundation, and are growing in clumps. I didn't plant them, but don't know if they're perennial or something that re-seeded. They may have been there in previous years and escaped my notice.

The furry leaves are a combination of green and gray. Each plant is only a few inches high, and the widest are about 8 inches (20 cm) at the base.

I'd appreciate an identification and a bit of information as to what I can expect from them as they grow. If they produce flowers, when will that be? Also, what will they look and smell like? Right now I don't see buds, just pairs of young leaves forming at each center.

They're very pretty and different from anything else I have, so I want to move some to where I can see them. When can I do that? I've heard that a general rule of thumb in transplanting is either well before a plant flowers, or after the flower has gone by. The foliage alone is worth looking at, but if it's saving energy for flowering, I don't want to interrupt the process.

Since they're all in the shade, is that a pre-requisite for optimal growth? I have both shady and sunny areas, so that would be helpful to know.

I live in zone 6. Our average high temperatures in the summer are between 80°F (27°C) and 90°F (32°C), although we usually get a few significantly higher spells. The location of these makes me think they're shielded from that level of heat, but I can't say for sure. I started seeing them just after our last frost, but if they've overwintered, they're hardy well below freezing. 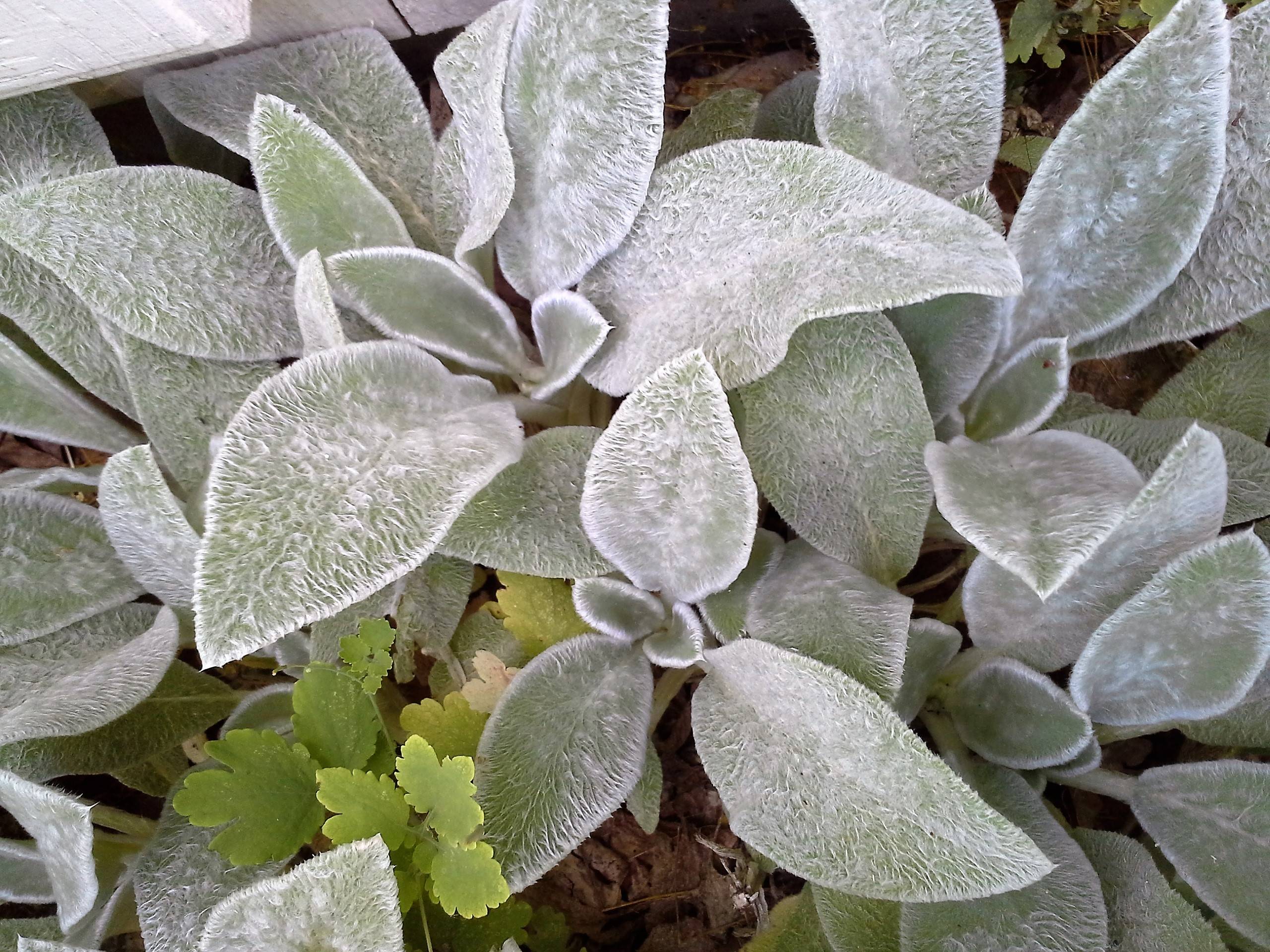 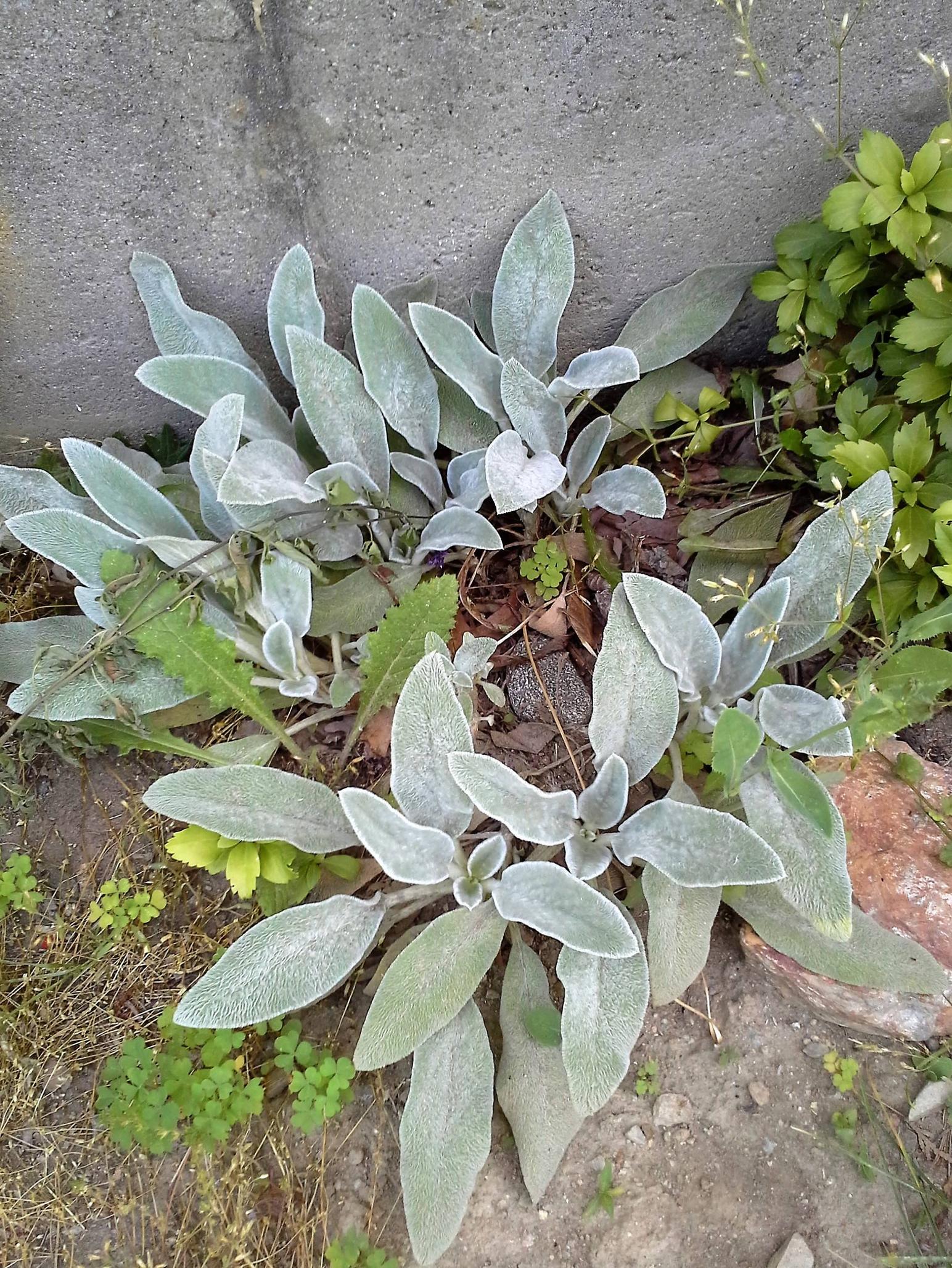 It's one of the Stachys, most likely Stachys byzantina, common name Lamb's Ears because of its velvety, furry leaves. There's one called Stachys byzantina 'Silver Carpet' which is good ground cover but doesn't flower (see link below) but there are others which do flower; 'Cotton Ball' produces spikes of round, silver white bobbles for instance. Hard to say which one this is at this stage, but they do like sun and free draining soil, though in very dry conditions, the leaves may shrivel and dry out. What they loathe, though, is wet in the form of lots of rain, when they'll become a sad and soggy mess.

More information below - in this link its called Stachys lanata, which is what it was previously known as, but this may be more useful information if you're in the States. According to this, the plant 'travels' and doesn't stay where you've planted it (which isn't true at all in the UK - it spreads and may die out a bit where it once was, but essentially it remains in the same area)

If you still think it's worth trying to move one or two to a more visible position, unless you're prepared and able to water daily with a couple of litres after moving now for four weeks or so, it's probably best to wait till the weather cools down as Fall approaches - either that or move them in early spring next year. But there may be a good reason why they're growing where they are - it's probably drier, it's out of rain, and certainly more sheltered up against your house.

Not the answer you're looking for? Browse other questions tagged identification transplanting optimal-conditions or ask your own question.

5
Help identifying tropical[?] plant
5
What is this low growing plant with trifoliate leaves?
3
Identify this upright branching weed with long leaves and reddish stems
4
What is this gray-green plant with magenta flowers?
5
Can I transplant young Rose of Sharon plants in July in Zone 6a?
5
What is this small annual with narrow gray/green leaves and rust colored daisy-type flowers?
3
What is this prickly, burr-covered plant with different colored flowers on the same plant?
6
What is this green, fuzzy, plant growing on a tree?
1
Tips for planting peonies