Will Bermuda grass survive in Boston

I live in the Boston metro area, which is a zone 6a/6b. The grass we currently have does not do well in the summer at all. The center of our yard is full sun most of the day and pretty much dies when the real summer heat arrives. Therefore, I am considering planting a warm season grass in my yard. For fun, I planted a patch of Bermuda grass this spring and it is thriving at the moment. I know that it will go brown in the fall once the temperatures drop. However, I do not know if it will withstand the winter and grow again in the spring. Winters in the Boston are are quite variable, year to year. Some warm, with little snow and others modestly cold with lots of snow.

Anyone have experience growing a warm season lawn in the northeast?

Warm vs Cold Season is a little bit about how much of a sun beating a grass can take, but it's more about temperatures. A warm-season grass might survive the winter, but it'll turn green late and brown early because of the average spring and fall temperatures.

I understand that for a lot of the summer, temperatures in "warm-season" areas are only 5-8 degrees hotter than New England, but the spring and autumn temps have a much larger gap.

If you're looking for something to thrive, my advice is buy a seed mix. Scotts sells one that's a combo of Kentucky Bluegrass, Ryegrass, and Fescue. Whatever doesn't survive will be displaced by something that will.

Fescue is what's used for northern football fields. Kentucky Bluegrass and Ryegrass will soften up the mix. I have some patches of Bent Grass and Kentucky Bluegrass that do just fine in full sun, Zone 5a, with no treatment or watering (except in >2 week drought periods)

No grass will do well in full sun during drought periods if it isn't watered. Basic lawn sprinkler is $8, and you only have to break it out a couple times a month, and that's only if it isn't raining.

I have to do this so my three dogs don't polka-dot my lawn.

Summary: full sun cool-season grass, rather than warm-season. Scotts blend of Kentucky Bluegrass, Ryegrass, and Fescue. Water during droughts. Should be golden.

Alternative: you could always go freedom lawn. Just mow, and let the chips fall where they may. Eventually some kind of ground cover will move in. (As long as there aren't dogs dropping urea nukes - nothing survives that during a drought).

I live in eastern Massachusetts as well and completely understand your struggle. Portions of my traditional cool season lawn used to die completely and the rest of the lawn was often brown for the end of the summer.

Another trick I have learned that has helped is treating the lawn in the late spring with a "hygroscopic" compound such as Hydretain (available on AMZ). I can't water (no personal well and municipal restrictions), but most years the Tall Fescue with the Hydretain treatment stays green most of summer and has never died off completely.

Tall Fescue is not as "soft" as other cool season grasses and does need to be over-seeded periodically, but Tall Fescue has been best solution I have found in my situation which sounds similar to your struggle.

I have attached a picture of my parent's yard (also in E. MA) last summer in which a portion is Tall Fescue (patched a dead area) surrounded by a traditional cool season lawn. Tall Fescue is green, everything else is brown. 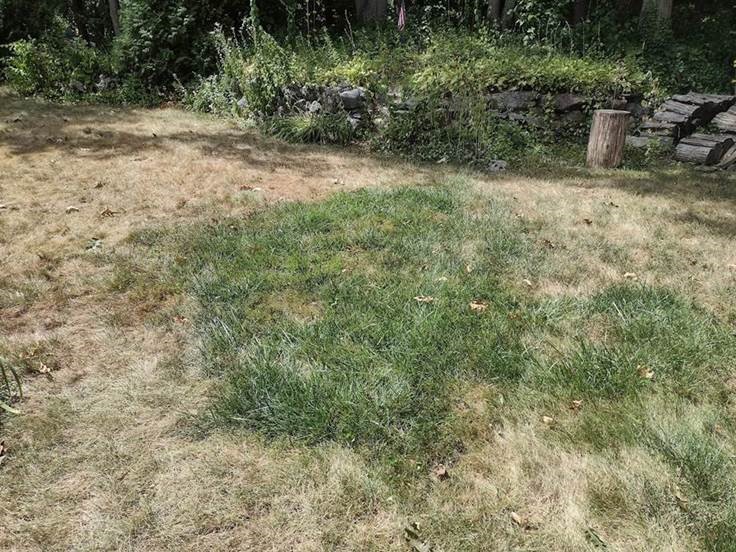 2
How to prepare lawn for overseeding

15
How do I quickly remove crabgrass without too much manual labour?
6
What would be a good "cat grass" for the central Texas heat?
9
How do I fix the worst lawn on the street?
7
What is the proper way to overseed your lawn?
2
How to prepare lawn for overseeding
6
For a patchy lawn, is it better to apply pre-emergent or a lawn patch kit in the spring?
3
Killing Bermuda Grass
2
Removing Bermuda Grass
6
How/When to Remove Dead Weeds and Reseed Lawn?