My sunchokes are acting like beacons for japanese beetles, should I do anything?

My sunchokes are attracting about twice as many japanese beetles as a sunflower would, should I do anything to control them, or just let them be? 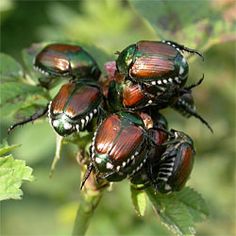 In my experience, there aren't many options for controlling Japanese beetles. The choices you have:

This pheromone type trap will draw japanese beetles from just about anywhere. I once set one up about 100' from a japanese maple that was absolutely infested, and within 10 minutes there was a visible cloud of beetles flying off the tree and toward the trap. The thing must have finished the day with 500+ beetles in it. That said, they'll also draw beetles from the surrounding areas. So they work best if you can place them a fair distance from the area you are trying to protect - at your property line if you have the room. For several days the traps I set up had dozens and dozens of beetles flying around the openings and dropping into the bags (from which they did not escape). After a while the visitation numbers dropped, but so did my observations of beetles on my tree and garden crops. I didn't attempt to add more bait to the traps as my problem was solved to the extend I needed.

But I will never forget how impressive it was to see all those beetles leave the tree and head straight toward the trap.

Not the answer you're looking for? Browse other questions tagged pests sunchoke or ask your own question.

6
What birdseed can I use to attract native birds in Houston, TX, that won't attract squirrels?
1
Is this flea beetle damage on this hollyhock?
4
What do sunchokes look like when they're sprouting?
5
I've read that butterflies like sunflowers, do they also like sunchokes?
3
Is there a good way to know if you should transplant sunchokes to spread them out a little bit?
2
What procedure should I do when I water my sunchokes?
3
What causes the stems of sunchokes to turn red and lower leaves to die?
3
Is there a special way to cut off sunchoke flowers?
6
Why are some of my pumpkin plants wilting, and showing what looks like stem rot?
1
Are moles effective at controlling Japanese beetle grubs?