My oak appears to be dormant. I am in Cape Town, its winter and around 6- 14°C overnight.

My oak tree sprouted 8 suckers and they are growing strong. Why would the tree not sprout from the trunk or branches (buds are not swollen) but sprouting suckers with leaves?

Suckers look extremely healthy, should I take them off the tree to preserve the energy for spring? Why would they sprout? 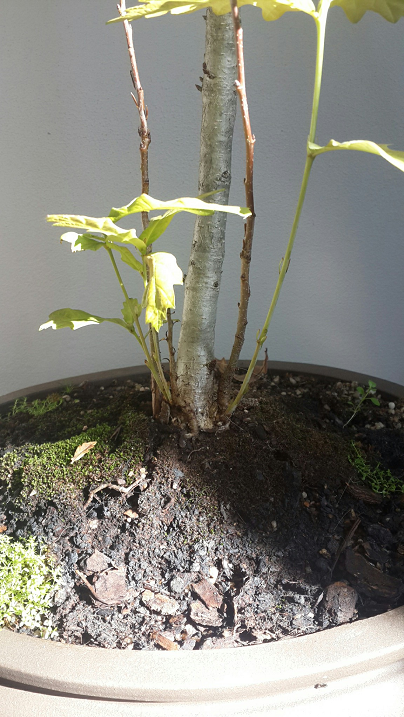 If its indoors, that would explain why its producing growth of any description - oak is really an outdoor bonsai, only being removed to shelter if temperatures fall low enough to freeze the soil and roots. There appears to be a bud on the main stem about half way up (in the picture) but I can't tell whether that's dead or not. First, check the main stem's condition by scraping back a bit of bark with a fingernail near the top to see if the main stem has died - if its greenish and moist beneath, it hasn't, in which case you should remove the basal shoots or suckers. It should still be outdoors though - the overnight temperatures you describe are not even minus ones, but now, you'll need to harden it off first. If the main stem is dead, then the only growth you're ever going to get is off the base, and you might then want to decide whether you want to keep the tree or not.

Having said all that, I'm curious as to why there's no topgrowth in the form of branches, but merely a straight trunklike stem... what's the explanation for that?

Not the answer you're looking for? Browse other questions tagged bonsai oak or ask your own question.

3
Should I leave my bonsai oak tree outdoors during winter?
3
How should I transfer swamp oak seedlings from pot to ground?
6
How can I grow an in-ground 'bonsai' oak tree?
6
Where should I trim to convert this ash tree in a bonsai?
4
What's wrong with my Scarlet Oak tree?
5
What are the curled darkened areas on maple leaves?
3
Oak Tree Seeding
4
Is my red oak tree dead? Only suckers growing:(
3
Can I grow an Oak Live Tree in a large container to keep it around 20 ft high?
1
Training a spindly oak tree