What is this bush/tree that has clumps of little green berries but also sometimes apples?

I've lived in my house many years and have always enjoyed this bush/tree plant in the front that looks a lot like an apple tree (blossoms, leaves). It has clumps of little green berries (I'm sure not edible) but also every so often produces a couple of apples. what the heck? I've (carefully) eaten one or two of the apples and they seem just like regular old apples. But why are there clumps of green berries (multiple, on little stalks, like cherries grow, only much smaller than cherries). I was just pruning it today and noticed there are a couple of apples on it. But the little green berry things are confusing me. Is this thing grafted? I live in the Pacific Northwest. Any idea what this shrub is?

Additional photos are at http://imgur.com/a/pwBaG. 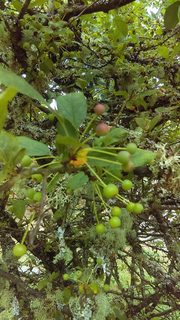 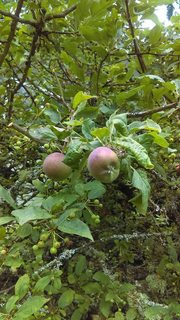 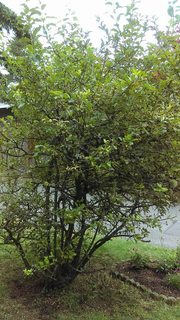 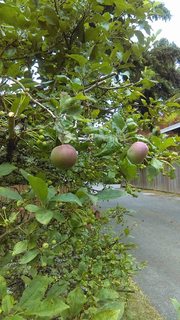 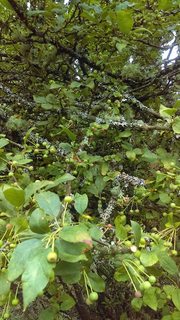 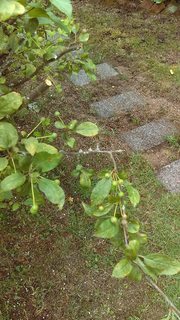 I think Fiasco Labs has the right idea, asking about suckers. The tree appears to be growing like a bush. So, if it's growing on a rootstock (which most apples are), then some of those lower branches (suckers, some people call them) are probably from the rootstock rather than the apple tree it was sold as. Crab apples and such can be used as rootstocks. The branches growing higher from the original trunk (or what is left of it) should be the ones producing regular apples, if this is the case.

I'm guessing someone coppiced the tree and this encouraged the rootstock to produce branches, as well as the portion above the rootstock.

By the look of the bark, I wouldn't be surprised if you got some mistletoe growing on there later on. So, if you get a surprising third fruit from the tree, that might explain why. In fact, it's possible those small fruits are some kind of rare, green mistletoe, but I'd rule out other things first.

20
Why are my apples rotting on the tree?
13
Please help me ID this apple or apple-like bush/tree in my yard - Small green apple with no stem and thorns
19
How do I prevent parrots from snacking on my fruit trees?
3
What is this bush in my yard with many small green apples?
7
Help Identifying this Plant
2
What type of tree is this that produces purple berries?
3
Why is my wild black cherry tree dropping fruit?
5
What is this bush/shrub that has thorns?
2
Small tree identification - Pacific Northwest USA
3
ID this semi-invasive, large ferny plant?