How do I plant potatoes that sprouted in my pantry?

I'm gearing up to plant some red potatoes from the grocery store that sprouted in the pantry. When I plant them do I plant them stem-side-up? And, should I plant them shallow so the stems poke out of the soil?

And last, would this be considered planting or transplanting?

First, if the potatoes are big, you should cut them into smaller pieces so that you have one or two eyes (the bit that's sprouting) on each piece. Leave the cut pieces out for a day or so to allow the cut surface to dry out a little. This will help to prevent the potatoes from rotting in the ground.

While you're waiting, dig a trench about 12" (30cm) deep to plant the potatoes in. Potatoes like a light, well-drained soil, so if yours is heavy, consider mixing the diggings with some compost to help lighten it. Backfill the trench with about 4" (10cm) of the dug soil.

Place the potatoes with the growing stems pointed up, about 16" (40cm) apart, and cover them with 4" (10cm) more inches of the dug soil. Be careful not to damage the shoots, but it's OK to cover them a little: potatoes contain a lot of energy so they'll have enough to grow and emerge from the ground when they can start making energy themselves.

As the plants grow, you continue to fill in the trench; don't cover them completely after that first time. Eventually you will want to mound more soil around the stems, up to around 12" (30cm) high by the time the flowers die back, which is when they start putting energy into making tubers. Potatoes grow on the covered stems, so you want a good amount of the stems covered by that point.

Staring with the basics, potatoes will take about 12 weeks from planting to cropping, and the plants will be killed by the first frost. (The actual potatoes will be fine since they are underground, but the plant's leaves won't survive).

I don't know what the climate is like where you live, but midsummer is probably about the latest time you can usefully plant outside. On the other hand, you can grow potatoes in pots or containers indoors, if you have a large enough space and plenty of light. A single potato plant will grow leaves that cover an area more than a foot in diameter. Indoors, you can plant them in August and harvest "new potatoes" at Christmas.

"Grocery store potatoes" are not the best source of seed, because you probably don't know what variety they are (i.e. whether they are "early" or "late" varieties - quick or slow growing). They may also have been in storage for a long time, and treated with a growth inhibitor. They may also have been infected by plant diseases which have no effect on humans, but may affect growing them for a second season. "Genuine" seed potatoes are grown separately from potatoes intended for eating, and special precautions are taken against disease infection.

If the potatoes are carrying virus diseases, they may infect the soil and the diseases may be transmitted to related plant species in subsequent years. The most common related plants in a vegetable garden are tomatoes, aubergines, and chillies, but there are also common garden flowers like nicotiana (tobacco plant) and petunias.

Just a final safety warning since you mentioned a 3-year-old: your potato plants may flower, and then set seeds which look like small tomatoes. The flowers can look quite pretty, but the seeds are poisonous. Don't forget that potatoes are related to deadly nightshade! Removing the seeds and disposing of them safely won't affect the potato crop.

Unfortunately I cannot comment, because it's not a complete answer, but every year when I invariably find some sprouting potatoes in a drawer, I just put them in some big pots (no more than 2 per pot) on the patio, plant them about 1/3 down (roughly 15 cm of soil on top, 35 cm underneath) and 'benignly neglect' them afterwards. When the plant has grown and starts looking tired I go and dig out the potatoes with my daughter and every year we find an abundance of small but perfectly tasty potatoes. This might be an alternative for a three year old that doesn't have patience, but would like his 'own' plant.

I haven't grown potatoes, so I can only answer the last part of your question, which is quite interesting.

Your process would be considered planting. Planting takes place when something, frequently a seed, bulb, or other type of root, is put into a growing medium, in this case your garden, for the first time. Your potato is the result of something that has been planted, so the question makes sense. However, the sprouting parts, or eyes, are actually where the roots for the next potato will form. Therefore, you'll be planting those potatoes for the first time.

Transplanting involves removing a plant from its current soil or other growing medium, and placing it somewhere else to continue growing. For instance, if you had already planted the potato in a pot or different area of your garden, the act of digging it up and moving it to where you're now growing it, would be considered transplanting.

If the potato has a decent sprout, you can remove it from the potato, and plant it by itself, and eat the potato! 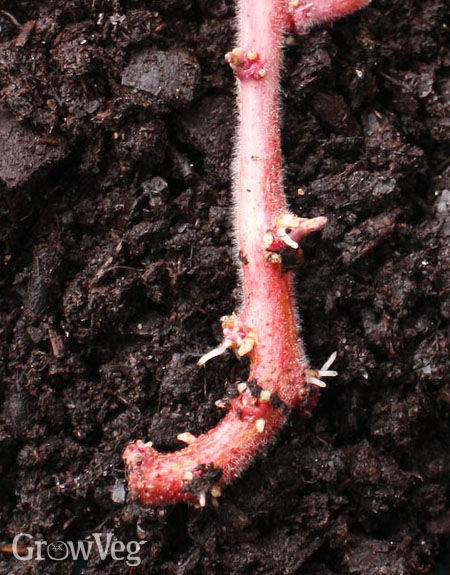 The aim of hilling the sprouts is to prevent sunlight from reaching the new tubers which turns them green, and poisonous. If you try to hill to get the stems to produce more tubers, that's a waste of time.

I presume that you're coming into summer now and the problem with that is that the heat will stop tuber formation if it gets too hot. So, don't expect much from this little experiment. And, if you're using grocery potatoes, you risk potato viruses getting into your soil. Best to use certified seed potatoes.

0
What are the effects of planting potatoes as a 'cover crop' in newly forming soil as a pile of decaying wood chips?

9
What should I do with some volunteer potatoes growing in my compost pile?
4
Best time to plant red potatoes
4
Will my potatoes grow?
5
Why are my Yukon golds wilting?
10
Why did my potatoes not grow?
1
Wet pre-sprouted seed potatoes, is there an hurry to plant them?
0
What are the effects of planting potatoes as a 'cover crop' in newly forming soil as a pile of decaying wood chips?
2
How to grow potatoes vertically in stacked beds?
1
How and when to harvest potatoes grown in an unorthodox bed?
2
Possible to grow sweet potatoes in towers?