What is wrong with this magnolia?

We have this medium sized magnolia in a pot since a bit more than a year. It survived the winter with us ocassionally taking it inside the house to prevent it from frosting.

When spring came it started to bloom, and in a matter of a week the flower buds that it so slowly grew opened and fell to the ground.

Then the leafs started to appear. In the beginning they had a healthy tone of green and it was leafy. But over the course of the last month, the color of the leafs have changed, they show ocasional black spots, and they tend to dry very quickly (although I think it is not due to underwatering). It has slowly, but constantly, been loosing more and more leafs.

In this period I found green plant louse and later on cobwebs. In both ocassions I have fumigated it, and no insect has ever appeared again.

I am a bit clueless. I'm not sure what it has or how to help it. I appreciate any feedback. 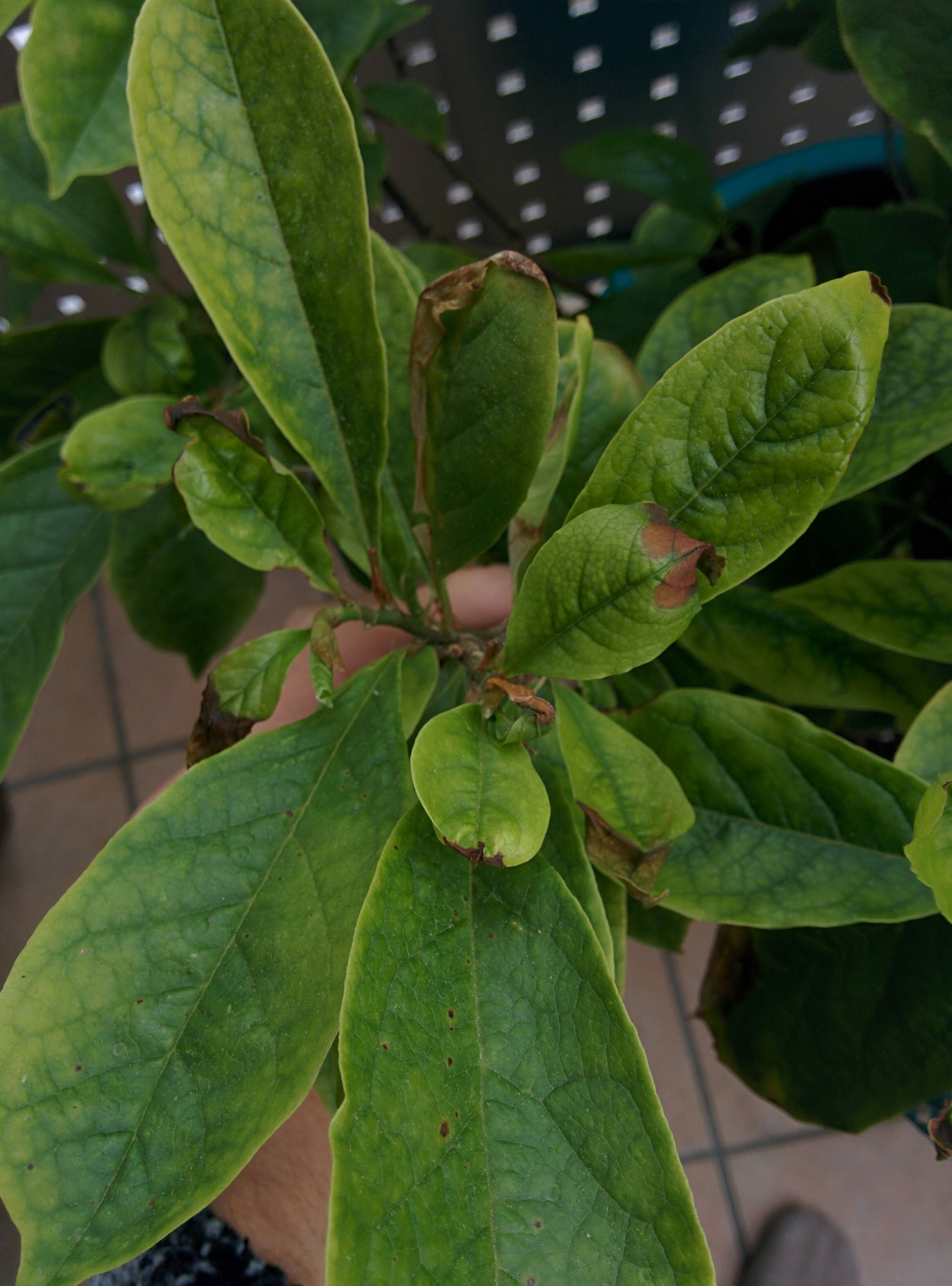 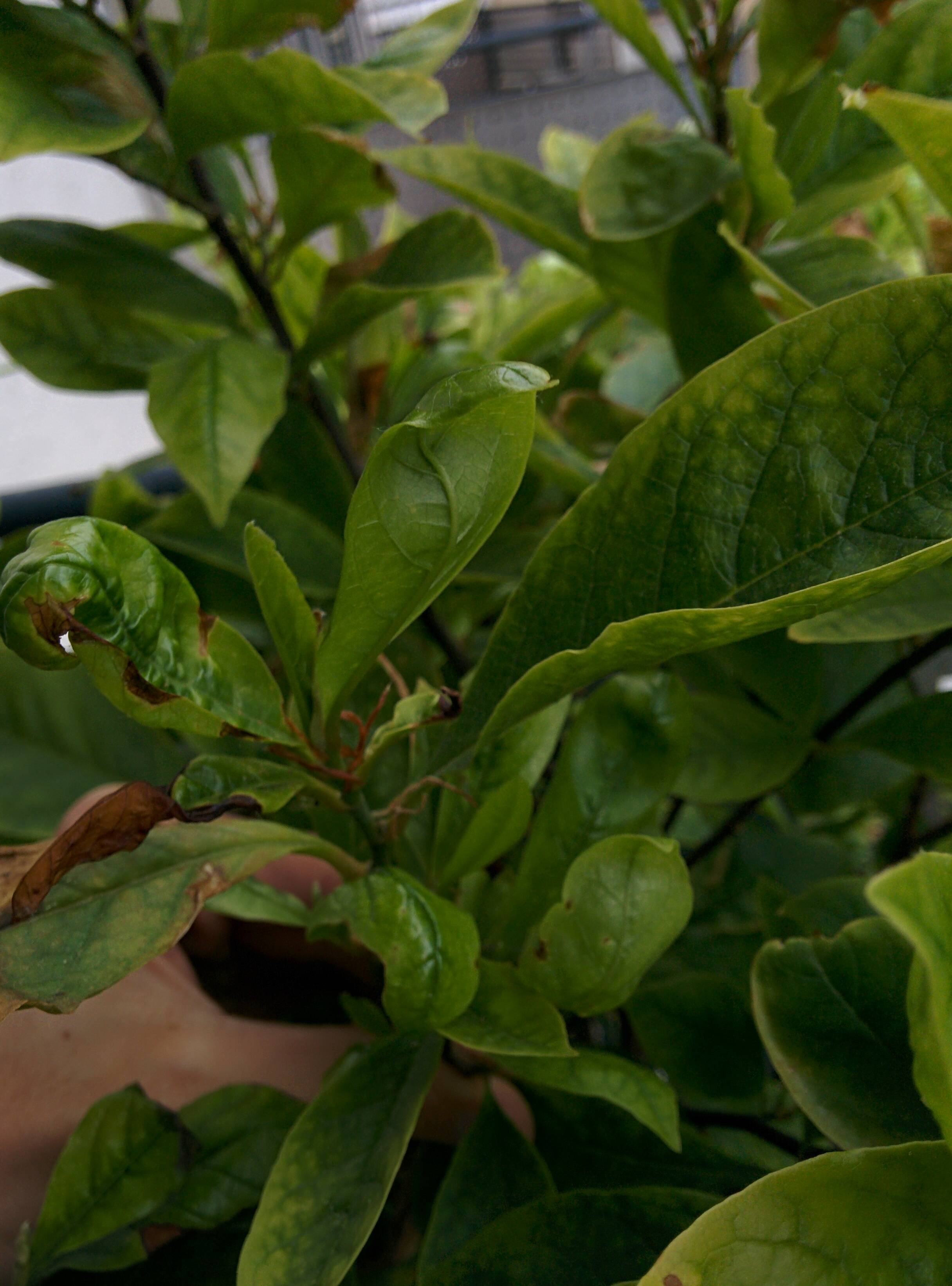 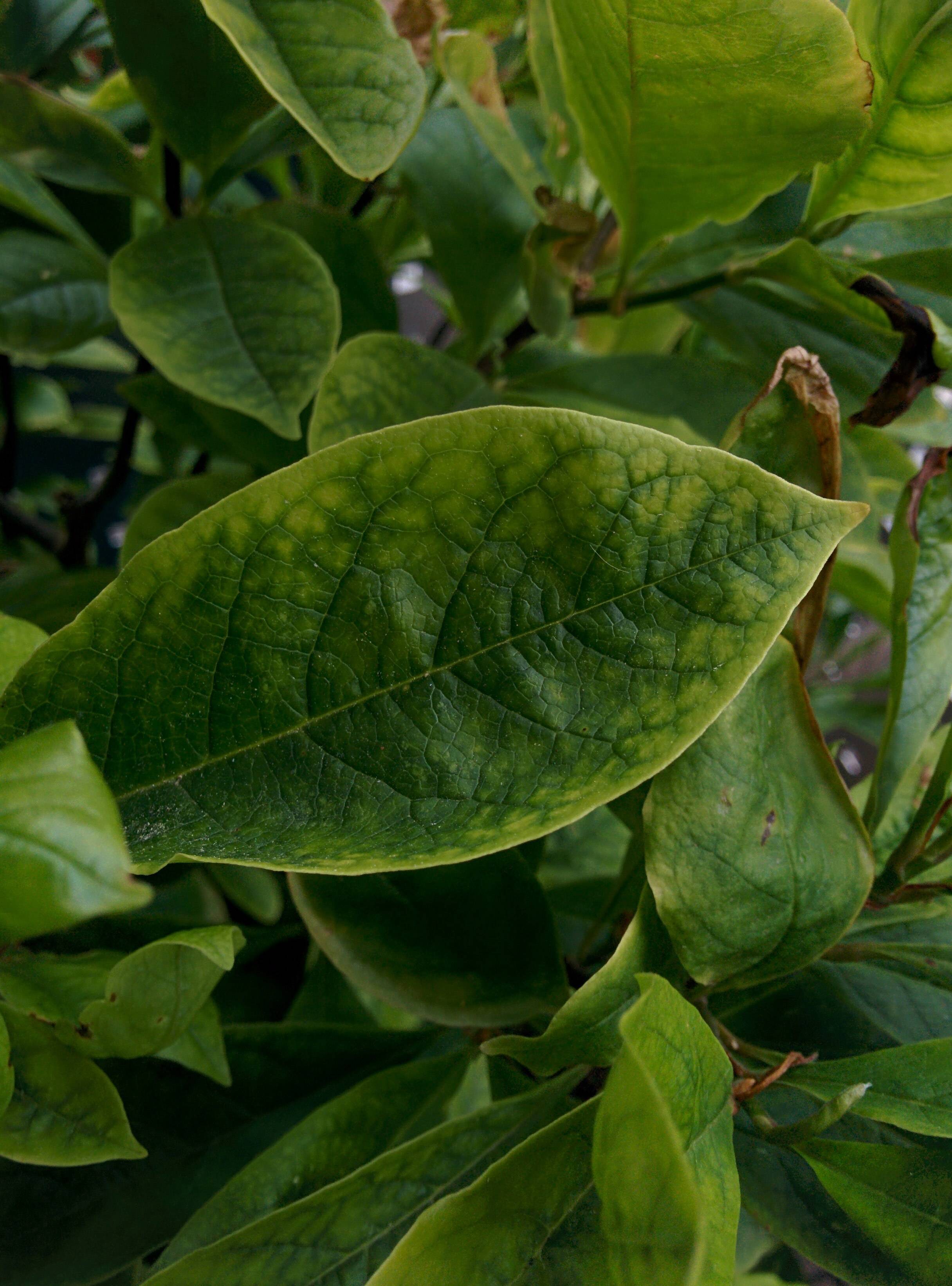 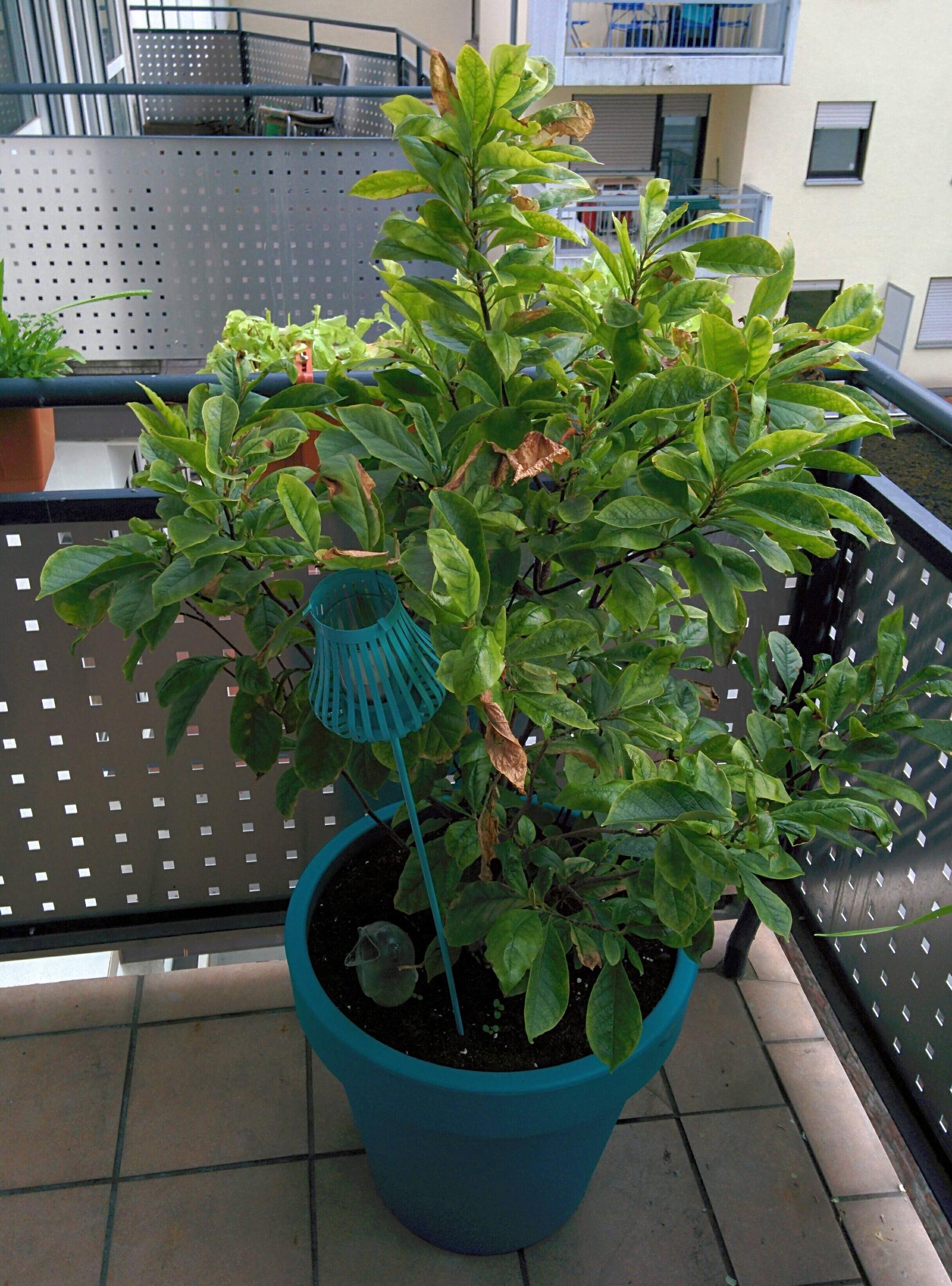 Following Stephie's suggestions, during the last month I've been watering this magnolia just with distilled water and fertilising once a week with a iron and magnesium rich fertiliser.

The results are wonderful (see pics below). New leafs grew healthy and green, no more burnt/dried points or yellowed. The majority of old, already yellowed leafs, have recovered a healthy green color. The also feel better to touch, more soft and silkier, and less carton like. Overall the tree has increased its foliage drastically.

Here are some pictures 5 weeks after I started treating it. 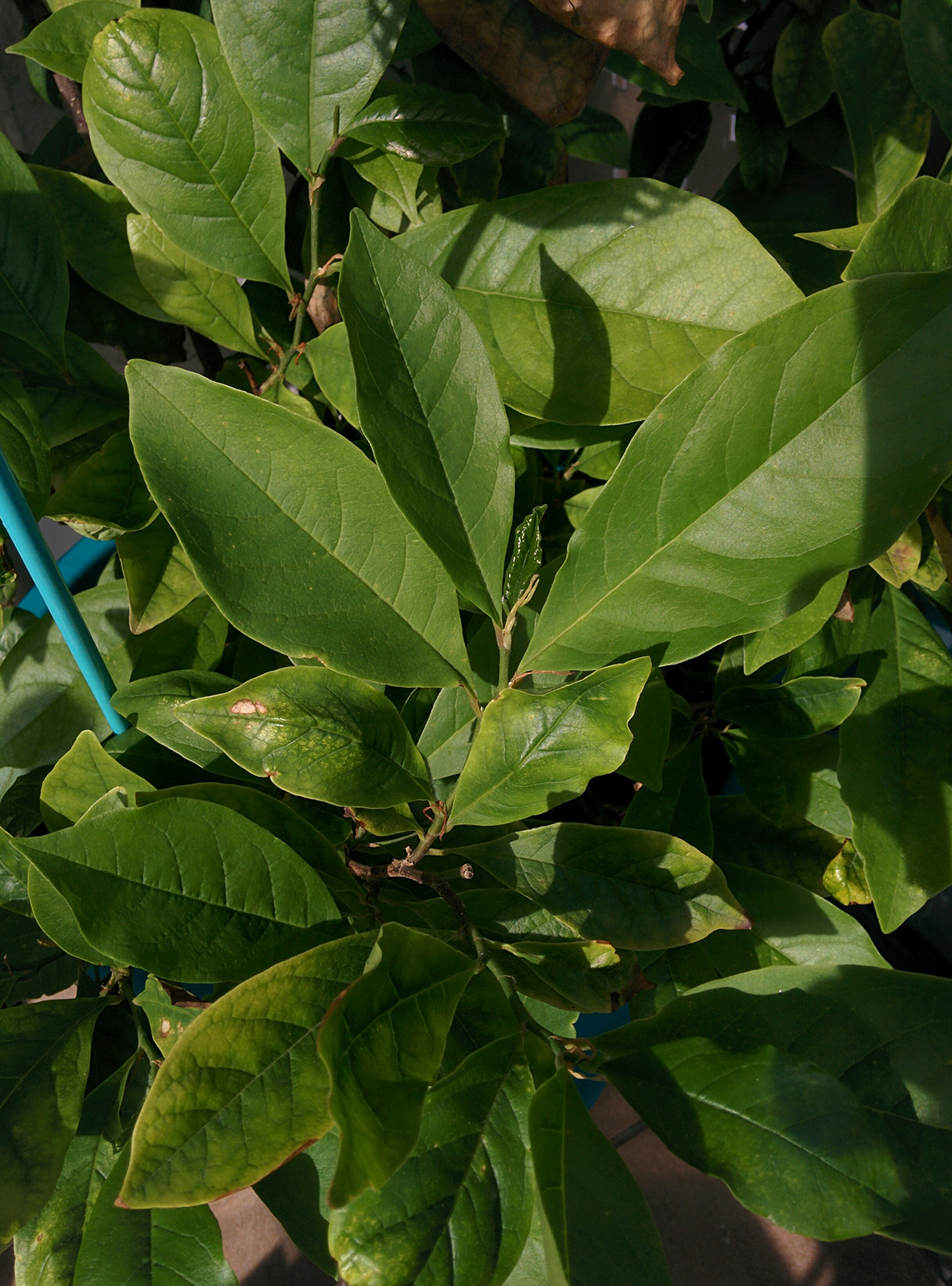 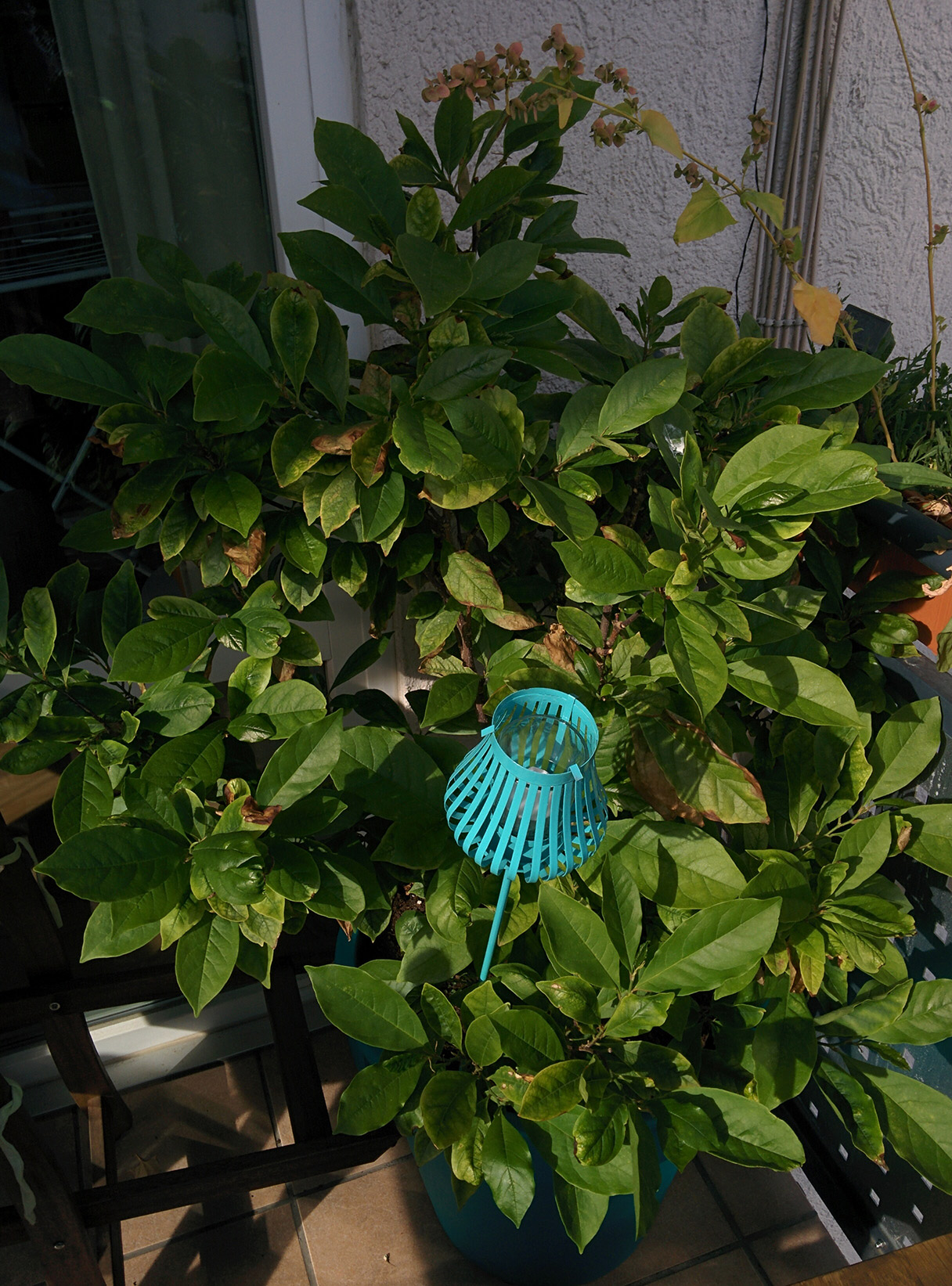 The light green areas are chlorosis, often an indication of iron or manganese deficiency. Magnolias are very quick in developing chlorosis if they don't have enough iron available - typically not because there is too little in the soil, but because the ph is too high, which binds the iron so that the plant can't pick it up.

First, if you have hard water, stop using it for your magnolia, rainwater would be better. Then use a fertilizer that contains iron - read the label. A single dose of special iron fertilizer may be advisable, but be careful, some are toxic and / or can stain your patio. Read the instructions and follow them.

If you want to get the best from magnolias, treat them as lime-hating plants That means ericaceous compost, slow-release ericaceous fertilizer, and no hard tap water!

They will certainly tolerate some lime, at least when grown directly in the ground in UK climate and weather conditions. But remember the general principle that whatever goes into a pot stays there indefinitely if the plant itself doesn't absorb it, so anything that the plant doesn't like will steadily increase in concentration over time.

Not the answer you're looking for? Browse other questions tagged diseases magnolia or ask your own question.

18
What is happening to my chilli plant? How can I help it?
1
How tall will this Magnolia stellata grow?
4
Help Identifying Basil Plant Problem
2
Should this Magnolia grandiflora be pruned?
5
How to treat a magnolia with white fuzz on its leaves?
2
Why did my hibiscus flower size reduce?
1
My over 23 year old Mango tree wilted and cracks on barks. Verticillium wilt or Dieback?
2
3 Mango Trees (6 months old); Grayish-Orange Spots heavily progressed; Blackening/brown curling leaf tips; 1 Mango Plant losing all its leaves!
2
Pyrus Calleryana 'Chanticleer' aka Ornamental Pear tree, ALL leaves are browning and curling ?disease?pest?autumn