Why did my fig tree stop making fruit?

Six years ago I planted a fig tree that was given to me. I was told it was a "dwarf" fig but there has never been anything dwarf about it. Within a couple of years of planting the tree it began producing very large (nearly the size of an egg) figs that were very juicy and the best tasting fig I've eaten.

Then three years ago we had a snow storm (rare here in Alabama) with single digit temperatures and the tree died back to the roots. It has since grown back to its original size (probably 12' tall) but has never produced another fig. We do not water or fertilize the tree and never have. The tree I was given was started from a cutting and was not grafted. 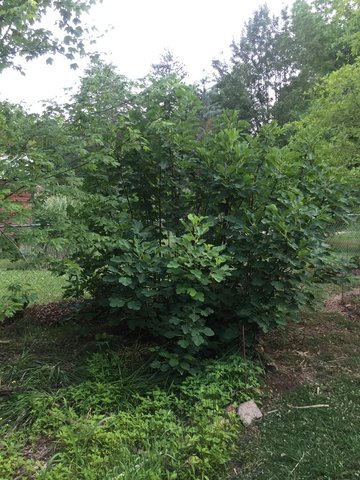 Does anyone know why this tree has become sterile?

The reason your "dwarf fig" is not so dwarfed anymore is because it was reproduced via cutting. The root stock that would have the cutting grafted to it is what determines the size of the mature shrub.

To answer your question though, I think it is probably still recovering from the stress of having to completely regrow.

Plants are asexual if there was a time that it started getting less light or more light it can flip the plant into stay INTHE vegetative state. Really there is nothing to do but wait and see if the summer months bring out the female in the plant and it will then if the lighting is good flower or produce fruit.

Not the answer you're looking for? Browse other questions tagged fruit-trees figs or ask your own question.

17
Why does my lime tree drop its fruit early?
7
How do I take care of a Port Jackson fig bonsai?
6
Why doesn't my fig tree produce fruit?
6
How to understand if my tree's roots are girdling
9
Fig fruit fell off before ripe
3
What causes yellow curling leaves and black bark on an apricot tree?
5
How to prune a young cherry tree that was left alone since being planted
2
How do I go about pruning a mature fig tree to a smaller size?