My husband and I purchased a home in Sterling, VA (zone 6b) about 4 years ago. There are two Japanese Maple shrubs out front. Since we've purchased the house, one of them comes back less and less each year. The other has some dead branches, too. This year, we're worried it has completely died. We'd like to figure out how/why, and what we can do to save the other one.

We mulch around them each year. In previous years, I've done my best to prune off dead branches each spring. We've not fed them, other than any food they happen to pick up from the roses next to them, but from what I understand, they're not supposed to need feeding.

The shrub that's doing better has black tape around the base of it. I'm wondering if these trees were grafted, and the graft has slowly failed on the dying shrub.

Does anyone have input on what to do for these? 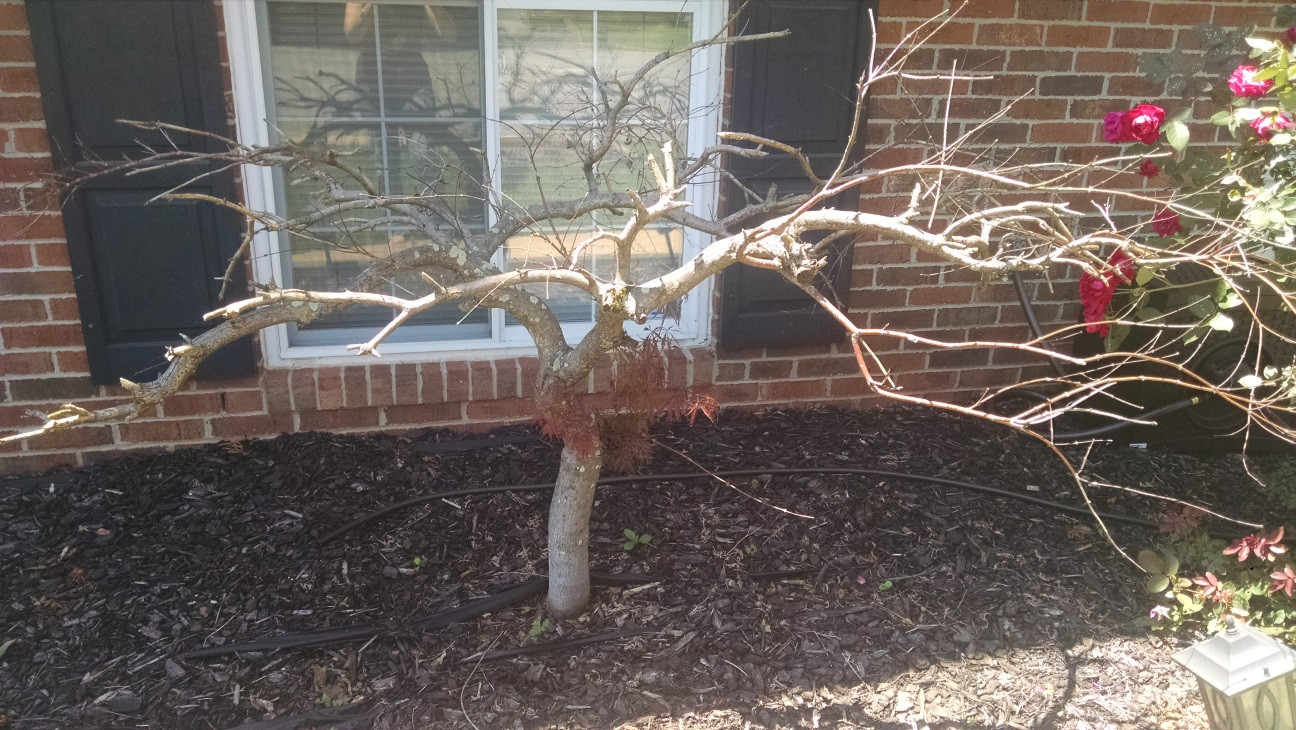 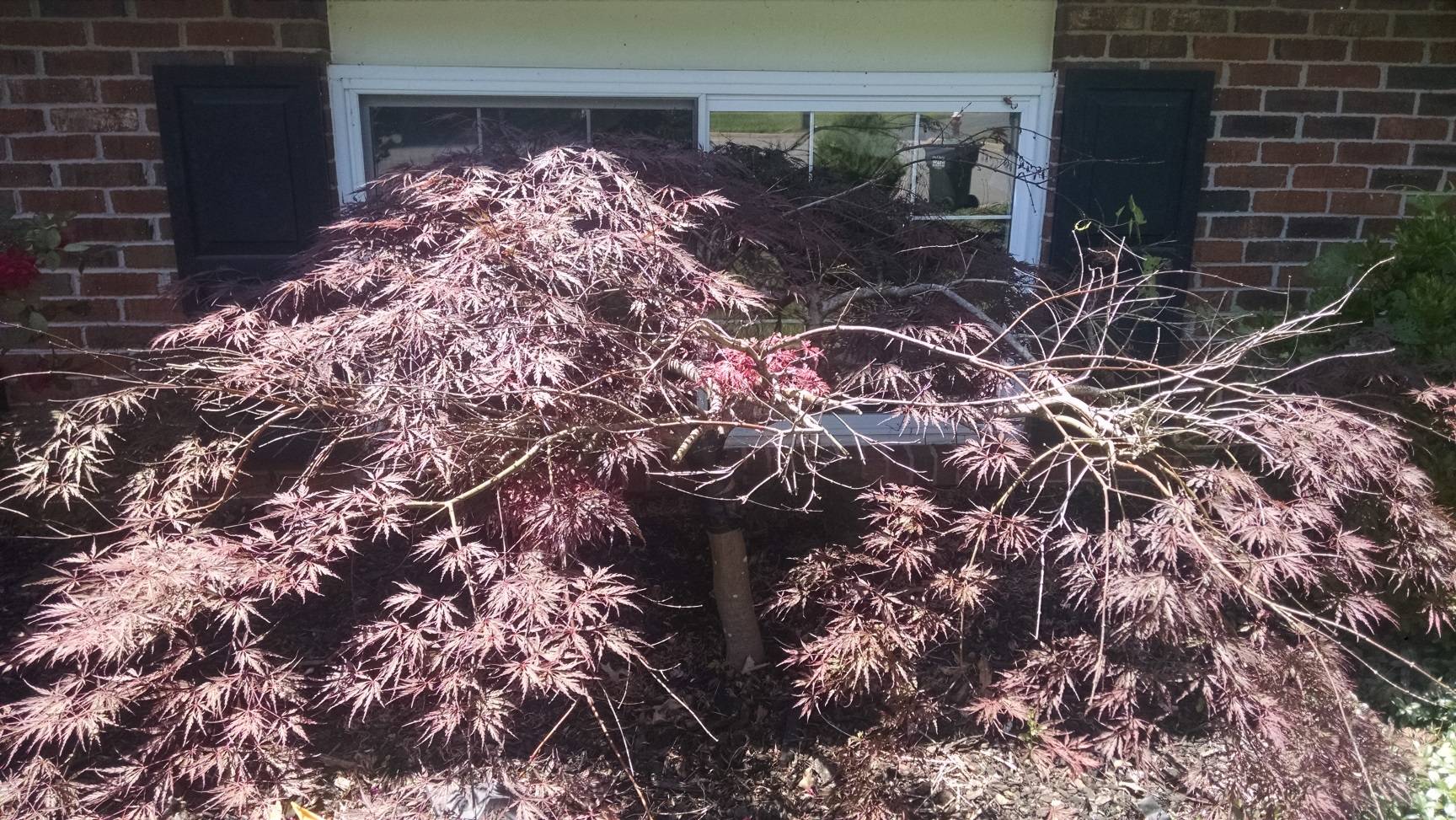 It is certain that they were grafted, but I see no indication of graft failure. Root grafts fail over time because of a difference in growth rates between the root stock and the cultivar/scion. Typically the root stock grows to a much larger diameter and a line of separation appears at the joint - a physical crack through the bark that eventually goes almost all the way around the tree. This cuts off the roots from a supply of photosynthate, so they starve to death and the tree suddenly collapses. I don't think this is your problem and I have no idea what the tape is about.

What I see in your pix is that these red-leafed maples were planted in the shadow of the house. Most common red-leaved varieties of acer palmatum need full sun (the red color comes from a compound that shades chlorophyl somewhat analogous to sunglasses). Without enough sunlight,the tree becomes progressively weaker - fewer and fewer leaves each season, more and more dead branches each spring. The other phenomenon that tends to occur is that sprouts will emerge from the root stock - I cannot tell for sure whether this is what has happened with the shrub in the first pic.

IMHO, the tree in the first pic is as good as dead. I would remove it and replace it with a green leafed variety or some other species. The second could be relocated next spring ('as buds swell' but before the leaves emerge) and placed in a sunnier location, if you have one; else you may want to have it removed as well.

They both look as if they're suffering from dieback, which is a common affliction with Acer palmatum varieties. I agree the worst affected one should be removed, but with the other, prune out the dead parts back to healthy wood. Don't cut into healthy wood, Acers bleed at this time of year, make the cuts just at the point where the dead part stops.This plant may go the same way as the other one, but sometimes they recover.

I wouldn't worry about moving it - it's clearly getting enough sun to produce a good colour in the leaves, so insufficient sunlight isn't an issue. If you live somewhere with lots of sun and high temperatures in summer, Japanese acers suffer in full sun - it burns the leaves causing a frazzled appearance. Judging by the thickness of the trunk, it looks like these trees are pretty mature and may have been heavily pruned, which in itself can contribute to die back. If you've had some very wet winters and your soil is heavy, then verticillum wilt might be the problem, so when you cut off branches, split them open afterwards - verticillum shows itself as black streaks witin the tissues. It may not show in completely dead wood though, and there is no treatment for this fungal infection anyway.

In general, feeding isn't necessary, but it might be worth giving a balanced fertiliser to the one you're keeping to give it a boost. However,if your mulch is of organic origin, it's likely the plant already has all it needs. Some further information below

There is something I'm wondering about though; I can see white patches on the trunk (and branches in the almost dead one) but can't tell what they are - are they just lichen deposits?

Here are a few observations based on my experience with Maple. First, they tend to do better in a shaded area of the house. It does not take direct sunlight very well so depending on the location of each plant, it may explain why one is doing fine and the other is not. Secondly, I experienced something similar and it was due to lack of water. I started watering it one more time a day and it seems to be doing better. I will keep my fingers crossed.

Not the answer you're looking for? Browse other questions tagged grafting dead-branch japanese-maple or ask your own question.

6
Part of fruit cocktail tree has died
3
What should I do with a wind-harmed tree that will not regrow leaves?
6
How should I treat a weigela bush with a large section of dead branches?
2
Grafting black walnut onto English walnut
2
Care of and shaping of an Acer Palmatum where many branches seem dead
7
Is this a sucker? Can they grow above the graft line?
2
Cherry tree ends of branches dying
2
Can you graft onto the stump of an established apple tree?