Today I finally caught my Venus Fly Trap in the act, or rather caught this snap of the bug relaxing on the trap. The plant just won't eat. It may have been on a local store shelf for a while (instruction sheet says source is http://flytraplady.com/ ). I filled a tray with 1" of reverse osmosis water and pushed a wandering box elder bug inside the dome. Today the bug is sitting on the one wide-open trap, looking lost, but untrapped.

I have not poked the traps in any way since I got it. Is this trap just exhausted? Is it not able to eat these guys (a pity because it's common inside in the winter.) 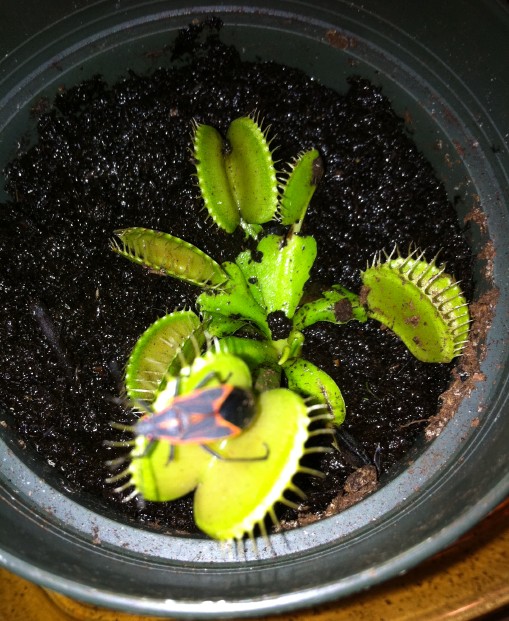 Quite possibly, although there are two explanations I can think of.

Each trap has some hairs on the inside (typically three on each side of the trap, but it does vary). A single touch to a hair is insufficient — there have to be two touches within about 20 seconds. The second touch can be to the same hair or a different hair. This behavior is interpreted as an adaptation against false triggering due to the wind/etc. So it is possible the (rather large) insect didn't meet this criteria — if the body is quite high above the "feet", then there's only the lower right leg that might be close to touching a hair in the photo. The insect seems a little larger as well — I've seen them catch English blue bottles which are probably about half the length.

Secondly, yes, the traps do become inactive. Each individual leaf trap has a 'life' of about 3 captures. Not sure if these are actual insect trappings or trap activations. One in a shop might get fired a lot by kids and as a demo, but then I think I've had them where I must have activated the traps more than 3 times. Either way this is on a leaf by leaf basis — other leaves should still be active.

You can test it with a cocktail stick. You are right not to overdo it, but once just as a quick test is fine. Remember you will need to touch two of the hairs.

Finally: I don't think this is a problem in your case, but I see a lump of peat in the middle over the crown (centre of the plants where all the leaves are sprouting from). Don't bury this area, and don't soak it — Venus Fly Traps are susceptible to rotting around this point, and the whole plant will die. It usually happens when the plant is transplanted too deep.

EDIT BY AN ONLOOKER WITH A LOT OF EXPERIENCE

No one ever asked what the temperature was. Let alone being in march this plant should be asleep. Personally I believe your VFT is half asleep or needs some time to adjust to its conditions. Your crown does not look rotten or weak and you can see some new growth coming from it. The post below was talking about nitrogen content of the soil. If there was enough food in the soil it would be worse off than this picture and will die let alone the pH of the RO water and the soil locks out a good bit of nutrient uptake leaving salts to burn the roots and crown.

You're watering with RO water which is good. Give the plant some time. Let it overcome its shock, and in the summer it will perform wonderfully. During the fall you need to put the plant in an environment to where it can sleep. Water it less and put it in 40°F temperatures like a refrigerator, garage, or outside if you do not have hard freezes.

Never fertilize this plant. Never give the plant water that is chlorinated or impure.

It is clearly an older trap that has gone into an inactive state purely for photosynthesis.

It is easy to tell from the outward bend of the sides of the trap and the hairs pointing outward. The traps with the hairs pointed inward and the inward curve are active.

They open like this when old, so the trap has more exposure to light instead of blocking the light from the inside with the hairs and the other side of the trap. So pretty much the ones that look like toothed mouths are active but once that trap bends outward the curved sides wouldn't allow it to shut in its prey and the outward pointed teeth wouldn't hold the bug in.

If they get too much Nitrogen, they will stop killing to get protein/Nitrogen.