What is this bush with small yellow flowers and an orange substance in the stems?

There is a round bush, which I didn't plant, growing in what is usually my "annual" garden. It's about two feet high and the same width. At the end of the stems there are clusters of small, bright yellow flowers, somewhat resembling buttercups. The flowers have no odor, although the leaves smell unpleasant in a way I can't really describe. In some areas narrow seedpods are appearing. The seeds are white, very small, and lined up in a row, like peas in a pod.

It has been blooming for about a month. I think it's pretty, and have been hoping it would stay for a while. To that end, I decided to deadhead the flowers and stems back to the next junction.

When I pinched off the main stems, I found that they're filled with a bright orange substance. It behaves like a line of paint from a tube, thick at the end and growing thinner and more pale as I squeeze the stem. The same substance is in the base of the cluster of seed pods. It is not, however, in the small stems which join the flowers to each other (I have a feeling stem is not the right word for those, and would appreciate a correction), or in the flowers themselves, even if I open a bud. It's odorless, spreads easily to any skin it touches, and, although not sticky, requires soap, water, and a bit of effort to remove.

I have a few questions: 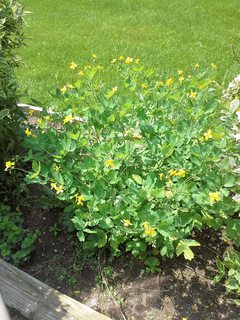 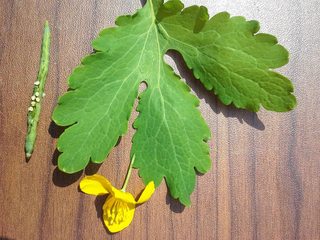 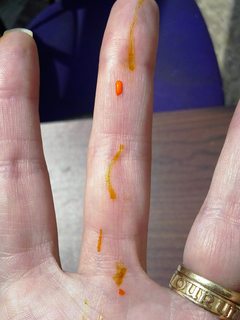 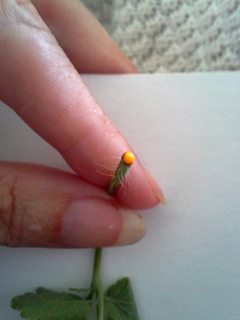 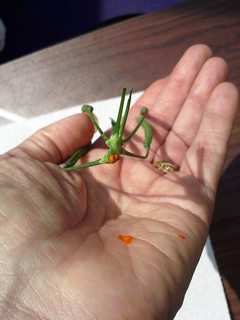 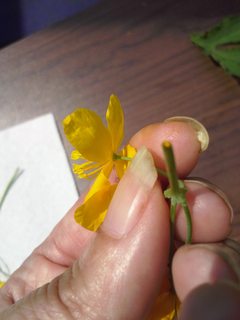 This is definetively Chelidonium majus or greater celandine. In the US it's a neophyte, probably imported by early settlers that used the orange milk to treat warts1 and other skin conditions.

It does contain various alkaloids, so you'd better not eat it, but the sap tastes sharp and very bitter, nothing you'd eat by accident. Wash your hands and do not touch your eyes or mucous membranes.

It prefers nitrogen-rich damp conditions - often a gap in a stone wall will suffice, but I have occasionally found it in drier spots.

It is a biennial or perennial, so it will come back if you let it grow. You might find its seedlings in other spots because it uses ants to carry its seeds: the seeds have a caruncle, a little fleshy attachment the ants like to eat. So they will carry the seed to their nest, eat the caruncle and deposit the seed outside. That's probably how you got it in the first place. You can definetively mimic the ants' behaviour by scattering the seeds as soon as the pods ripen.

The blooming period is quite long per se - some sources say until October - but if you dedhead it, you might get more blooms. Frankly, it's usually considered a weed here in Europe, so there are few sources about care.

1 It is even available as cream against warts, but applying the sap a few days in a row has been documented as effective. The mechanisms are unclear, it may be the proteolytic compounds or those that have anti-viral effects (proven in-vitro), or both.

This looked interesting so I tried to search for it. Not sure but looks like Chelidonium. Flowers and leaves look the same, seed pod and even the yellow to orange latex in the stem.

One thing to note is the plant is toxic, the latex can cause contact dermatitis and eye irritation so I hope you washed your hands thoroughly and keep them away from your eyes. Has some therapeutic uses too.

Not the answer you're looking for? Browse other questions tagged identification flowers seeds shrubs germination or ask your own question.