What should we do with a 7-8 year old honey locust tree that has been damaged by disease? 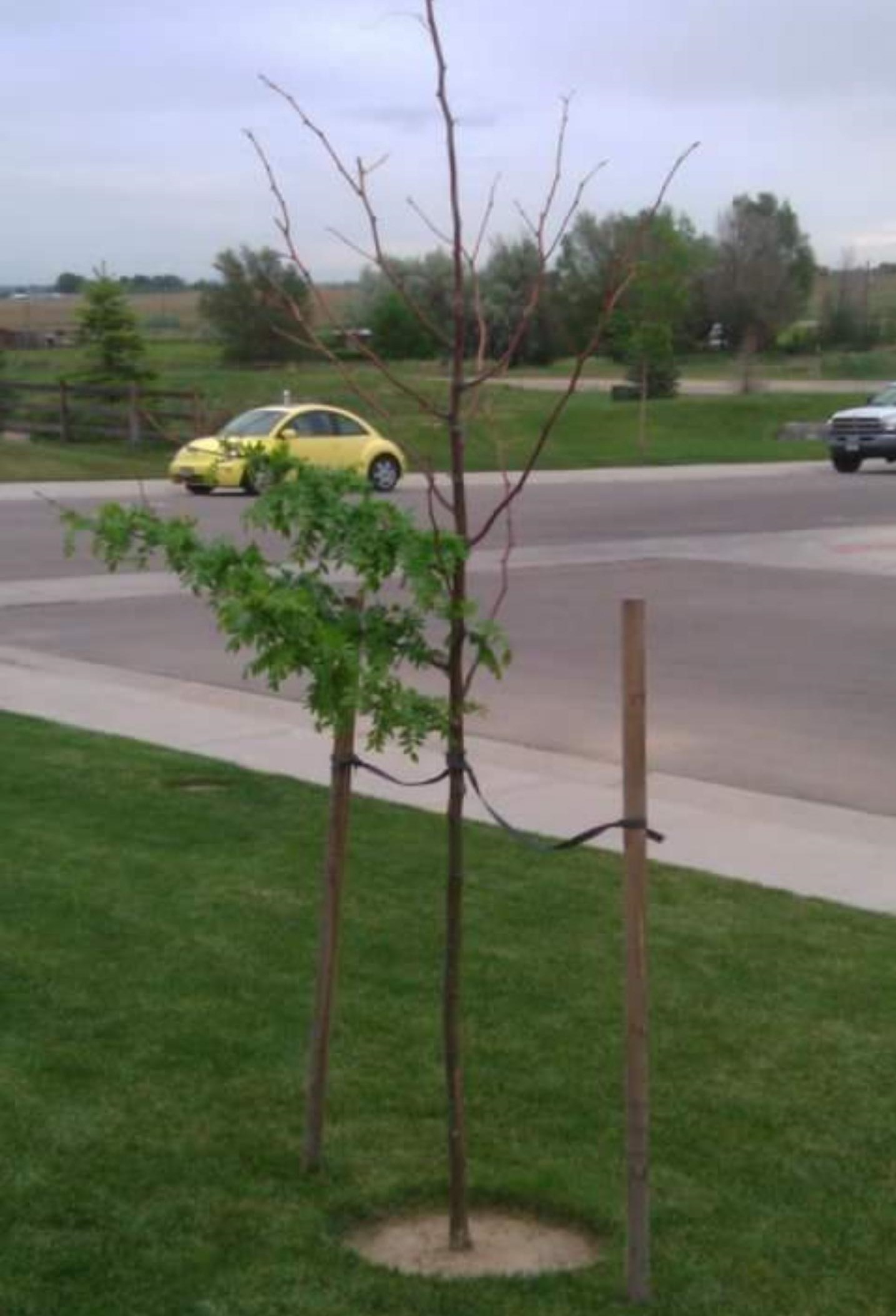 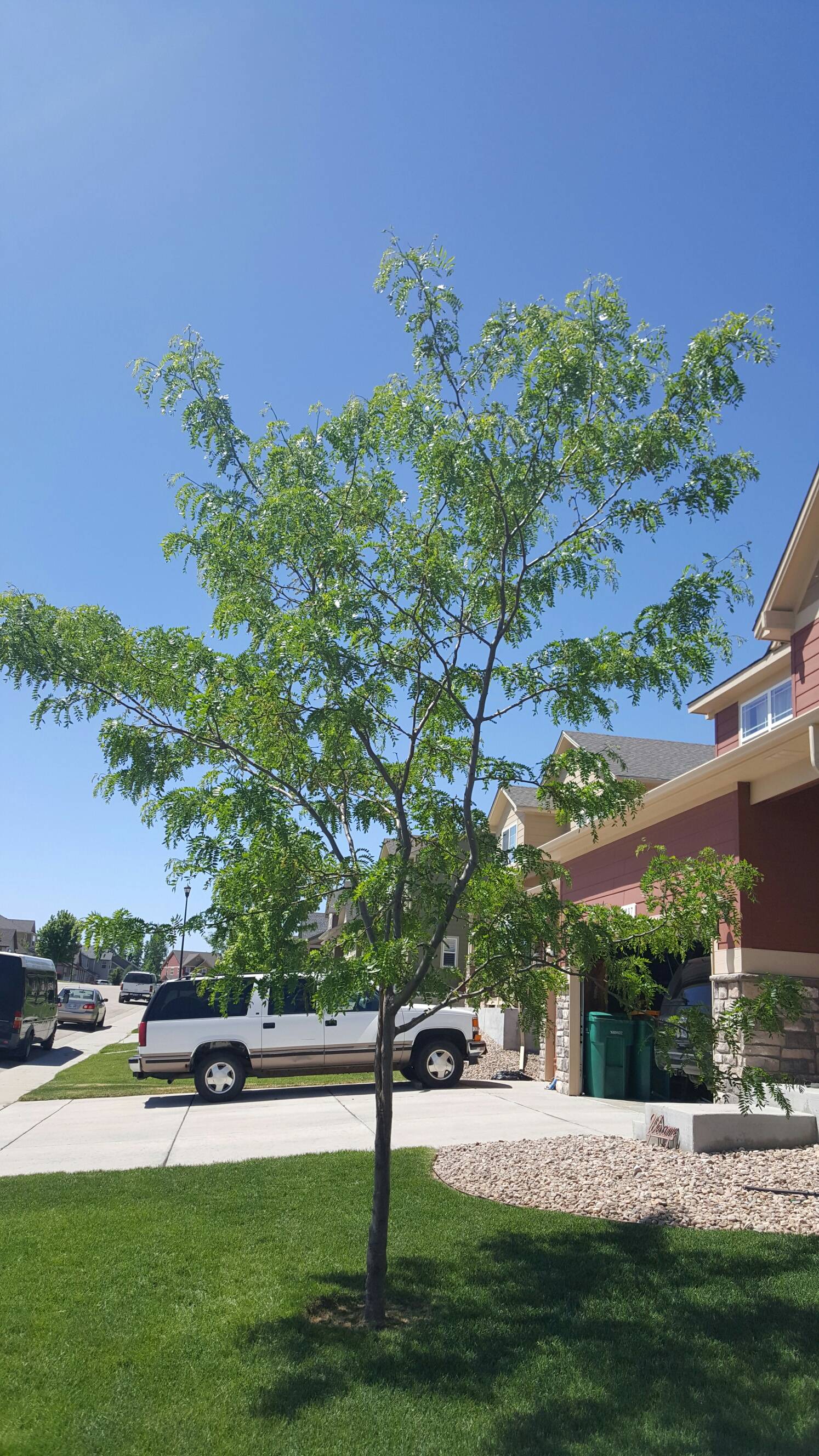 We have a honey locust that developed a disease within it's first year and an arborist saw it. He told me it is what they call herpes for trees. It had cankers of some sort on the trunk that had killed the majority of the tree. He said we could cut the main trunk off and create a new main trunk with a zip tie, the nearest large branch, and patience.

After 7 years, it has flourished, somewhat. The trunk has grown around the dead part and it appears sturdy. However, I'm afraid too much of the inner trunk is dead wood and will not provide a sturdy enough trunk as the tree continues to mature. No branches really grow on the affected side of the tree either.

Do we bite the bullet and remove the tree now or will it be okay in the years to come? We love our little sad tree...

Edit: I replaced the close up of the trunk with a full size view. You can still zoom in to see the damage. It starts as a "V" near the base and moves up.

With this new view, do you still recommend removing the tree? And is it a disease or poor transporting/planting?

Your picture shows that new growth has almost enclosed the old bole. As time goes on, the gap will close and new wood will be added each year all around the trunk. Structurally the tree will be okay for at least a decade or two or more. Along this 'seam' and its edges, however, it is (almost) certain that branches will never develop. In other words, that one side of the trunk will never produce any branches.

Your tree appears to have only three or four branches that are alive. The ones without leaves, I think are dead and should be removed sometime. Were it mine, I would 'chop' it down to just above the lowest leaved branch and try to make it be the leader by repeating the exercise you've already been through. I would use a couple of zip ties to anchor a pole to the trunk and then tie this one branch up into a more-or-less vertical position. At the same time I might prune off maybe half of this branch's length. This will cause new branches to form from the buds at the bases of the leaves at the pruned end. While this doesn't leave you with much tree for now, you will have at least as much foliage by the end of this season and with the beginnings of what could be a nice tree.

Personally, I find these kinds of projects fun - that is why I am into creating bonsai. However, this tree will continue to look rather ugly and will demand some pruning attention to shape it over the next few years. You likely can replace it with another tree that will be beautiful in a fraction of the time for a minimal cost. Honestly, right now I am thinking about how I would like to chop it down to about 6 inches tall and see if I get shoots from the stump. If so, I'll dig it out this fall and put it in a pot and try to develop it into a bonsai. Then, either this fall or next spring I would plug a new tree into its place in the yard.

So, my honest opinion is: replace it;

even though it could be okay for many, many years to come with a bit of work. If its a project you want to take on, I'm rooting for you! You will likely learn a lot about trees in the process (water goes up through the wood, goodies from the leaves come down in the inner bark, there's cambium in between that makes the bole diameter increase annually, etcetera, etcetera).

10
How should young honey locust trees be pruned?
11
Why are my honey-locust tree leaves turning yellow in mid-summer?
3
How should I deal with my willow tree that has been butchered by the council?
5
Is my maple tree in trouble?
3
What has damaged this tree?
2
Pruning a young honey locust tree
3
Should I prune this 3 year-old Tamarind tree fork?
3
Tree not getting leaves in one section
1
Any disease or pest problems planting a Honey Locust?