The Internet has led me to suspect this is a nutrient issue but I can't figure out which nutrient or if that's true. This is a cherry tomato plant. It gets moderate sun- direct sun for about 3 hours per day in Southern California. It has been chilly here lately (~65 day, ~55 night) and randomly ~75ish. This plant was last fertilized 3 weeks ago with Jobes tomato spikes. Brand new leaves show no sign of disease- new leaves at base of plant show no sign of disease. Some flowers fruiting, others drying up without fruit. The lower leaves yellowed completely in 3 or 4 days. Upper leaves appear dry and have small light brown thin spots- not concentric circles. Other leaves have holes- usually the holes are in the center areas of the leaf and do not affect the tips of the leaf. 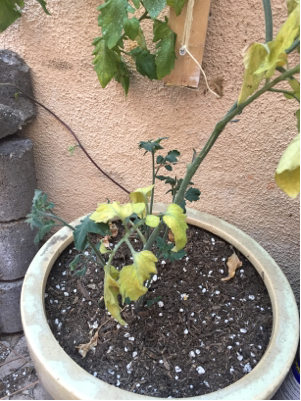 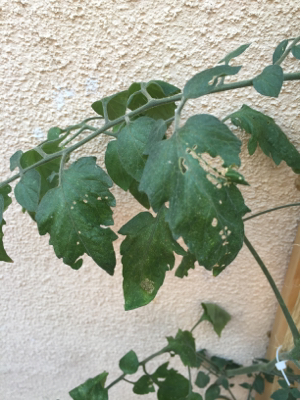 Edit: I didn't notice your mention of fertilization when I wrote my answer below. Jobe's Tomato Spikes are a 6-18-6 fertilizer. That means they're mostly phosphorus. Depending on your soil, that could be a good or a bad thing. I still think your plant is nitrogen deficient, and that the soil is drying out too quickly. It may also have other deficiencies. The roots could be damaged, but I wouldn't count on it. Most plants planted in containers in random unamended potting soil where I am exhibited strange issues like this (including the dry spots on the leaves), even without being root bound. I think the soil is the main problem. I'm guessing you have enough phosphorus, however! :)

Bringing it in the house will probably improve the plant in some regards while in its current soil, but the same thing will likely happen again within a week of putting it outside again, even if warms up. I might say, especially if it warms up. Putting a humidity dome around it with a UV filter would probably have a better result, but I still don't recommend that because it'll have to leave the dome some day. So, I would still recommend pre-fertilized Miracle Gro soil for vegetables, and/or topsoil, instead (and more soil). Or, if you don't want to repot it, I'd give it more nitrogen and potassium (without giving it more phosphorus), and a little rockdust, as well as something to make it not dry out as quickly (like compost, maybe peat moss, greensand, clay or something).

It's possible that Miracle Gro soil might dry out fast, too, if your area is dry or windy. So, adding some clay or something to it may or may not still be beneficial.

Edit (again): In light of the humidity you mentioned (if that's typical), unless it's pretty windy, I wouldn't be worrying about the soil drying out too fast. However, I'd still be worrying about minerals, nitrogen, and maybe potassium.

When plants are nitrogen deficient, it affects the lower leaves first (because it's a mobile nutrient, nitrogen from the lower leaves can be moved to new growth). Nitrogen deficient leaves are yellow, including the veins. Magnesium deficiency is similar, but the veins don't turn yellow. Iron deficiency causes new growth to be yellow, as does sulfur deficiency (but it looks different). Phosphorus deficiency makes the leaves have purple on them. Potassium deficiency makes the edges of older leaves turn yellow; it can also result in weak plants, smaller fruit, less heat-tolerance, etc.

Phosphorus toxicity is a possibility, too. The soil may have had enough already before the fertilizer spikes. This would reduce available zinc and increase available manganese. In this case, adding peat moss would be a bad idea, because it's acidic and more acidic soil has a higher availability of manganese. Overwatering can also increase available manganese. Manganese toxicity may be what is causing the dry spots. Adding rockdust would assuredly help it several ways, if this is true. It would increase the soil PH (due to the calcium in it). It would increase the need for phosphorus. It may also increase the need for potassium, though.

It looks to me like your plant has nitrogen deficiency. It also appears to have insect damage on the leaves (maybe from a caterpillar or something).

I wouldn't worry too much about the insect. There doesn't seem be enough foliar damage to merit much concern. I think Paul Nardini may have thought there was insect root damage, but I don't think there's sufficient evidence that the roots are damaged.

I definitely don't think you should bring the plant inside or put it in a greenhouse, in my opinion, unless it's a particularly sensitive variety (cherries are usually pretty hardy to weather, though), but maybe not even then. Bringing it inside will shorten season considerably, and you may need to harden it off again. In my experience, tomatoes aren't bothered much by those temperatures. It just needs fertilizer and/or better soil, in my opinion. The yellowing lower leaves indicate nitrogen deficiency. The insect damage indicates that the plant could use some more potassium, as well as perhaps calcium and/or silica. Healthy plants don't get eaten as much, normally. Extra phosphorus should make the plant more cold-tolerant. All three fertilizer components should help your flowers: Phosphorus is most known for it, but nitrogen plays a role with higher numbers of fruits (not higher total mass of tomatoes harvested, though); so, nitrogen may help with those extra flowers.

The container looks quite small. That's probably one reason you're getting deficiencies so early. I recommend giving it much more soil, if you can (5 gallons or so). You might try some pre-fertilized Miracle Gro meant for vegetables or some such. Since it's not a seedling, buying pre-fertilized soil should be safe. Don't transplant it while the sun is shining, though, or it could get bad transplant shock, depending on several factors.

A little rockdust or something should help with calcium and silica, but the Miracle Gro pre-fertilized soil likely has enough of everything. I've heard of someone getting about a hundred tomatoes on an Early Girl plant in Miracle Gro soil in a container (I don't think she even added extra fertilizer later in the season, but I could be wrong). So, it should be okay for your cherry tomato.

I personally like to use our topsoil in outdoor containers where I live, though, but a lot of people seem to think that's taboo for some reason. Nevertheless, the plants don't suffer in it, in my experience, so far.

I don't think it's the temperature. Colder temperatures (50F) stunt a plants growth. A deficiency/excess occurs when a plant is growing and there is a nutrient imbalance within the uptake. 55+ is okay (not great) for tomatoes, 60+ is better.

That amount of pest can't be ignored, it is certainly affecting your plant's overall health.

Yellowing of older, bottom leaves on a tomato plant is typical. Yours are yellowing a bit too far up to be considered normal.

It could be the pests alone, or it could be the double whammy of pests and fungus. (This is assuming the tomato spike is doing its job). There could even be some underwatering at play, which would bring in issues of nutrient uptake. Tomatoes are on the far spectrum of water-lovers - if grown in bags, the bags can be set in 2" of water all season and the plants will love it.

I wish I hammer down definite answers for you. Good luck. Keep the soil very moist. If bent on saving the plant, pesticide and a soil test might serve you well.

It's likely too cold for your tomato plant. The roots need to be kept above 60 deg F in order to be metabolically active and absorb nutrients. Below that you get functional deficiencies, with typically phosphorus being the main one which causes a blue/tinge to the leaves. You might also be over watering the plant.

I'd bring the plant inside until the weather gets hotter, or stick it in a greenhouse. A temperature probe might also show you what the roots are experiencing.

Also that pot looks too small for a tomato plant, so you're going to need to repot it.

10
A few leaves on my peppers are showing multiple small holes, should I be worried?
2
Tomato plant flowering but falling before fruiting
7
Are my tomato plants damaged by a chemical or a disease?
8
What is causing the leaves to develop brownish patches between the veins on my tomato plant?
4
What happens to my tomatos?
5
Tomato leaves look... off with lightly yellowing leaves
3
Tomato Plants Suddenly Weak, Falling Over and Yellowing
3
Pepper plants are showing strange, deformed new growth, what could it be? Virus? Deficiency? Herbicide?