This seems to be doing the rounds lately. I saw it on pinterest last night. Basically you take a slice of a ripe tomato, place it on some potting mix and then cover it. 10 days later you get tomato seedlings. 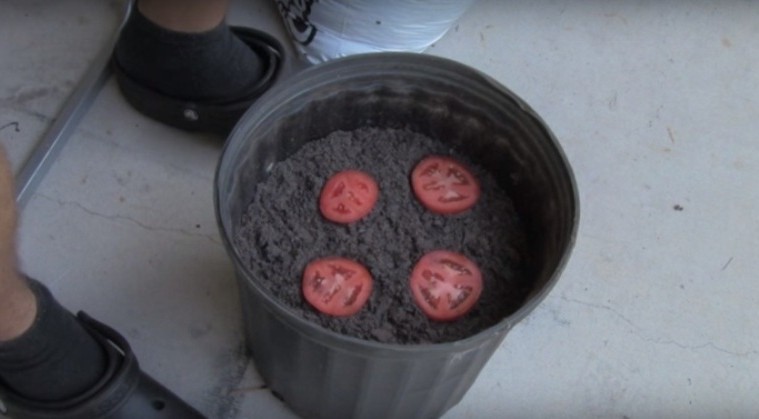 The issue I have with this is that you need a ripe heirloom, or open pollinated tomato in the first place, which implies that it would be a mid season tomato. And then you get seedlings which are going to be starting late which means that you'll never get a crop before the season ends.

So, unless you have a glasshouse, is this really a viable way to start tomato seedlings, or should you do it the traditional way of sieving out seeds, and storing them for the time when you want to start them?

I wouldn't do the slice method. In addition to what you stated in the question the other issue is that if it is the seed from a hybrid you most certainly aren't going to get the same tomato variety as from the parent. I live in US zone 8 so I am fortunate to have 2 growing seasons (second is a little shorter), so the delay in germination wouldn't be much of a problem. The delay may reduce the yield because some blossoms may not set fruit due to the timing and heat.

The problem with just putting the slice is that the gel encased around the seed inhibits germination probably to allow the seed to be eaten by animals and survive so that the seedling travels a little further. So for those with shorter seasons you are delaying germination a little longer if the gel remains. So it is possible it would work, but you could also get a beautiful plant filled with blooms or green tomatoes then a cold snap hits you and you don't get to harvest any ripe ones (Greens under the bed to finish ripening with a banana or fried greenies).

It would probably be better if the tomato was squeezed in a clear plastic cup, the top of the cup was covered with a cloth or paper towel and secured with a rubber band and put away in a cool dry place. After the seeds had fermented and you get a gunk on the top then spray/wash with water to remove the gunk. The seeds that sink are viable and can be used, the ones that float aren't.

I have had volunteer plants in my compost without the fermentation, but as far as seed saving tomato plants I seem to have better seed germination/viability with my heirlooms (Box Car Willie, Mule Team, Azoychka) if I do the fermentation.

I can't comment on hybrids since I've been sticking with seeds from Heirlooms. I would guess that since their parents are mostly cherry tomatoes that they would sprout and may produce ripe cherry tomatoes before a cold snap.

So it depends on your growing season, days to maturity, yield and such. Again, I would prefer to increase the seed viability and get them in the ground. Just my two cents.

Think of how tomatoes grow "in the wild" fruit drops to the ground, slowly rots, and when conditions are right a new plant emerges. So cut open the fruit and cover it in soil, the results are not surprising.

I don't see why this method wouldn't work for people who just want a "tomato". The types of people that will save seeds from store bought tomatoes and don't care that the tomatoes from their new plants will be genetically different, thus possibly having different taste, texture, size, shape, etc. or maybe for people that live in a region where they can grow tomatoes all year long and start them any time, if such a place exists.

Where I am the tomato growing season is fairly short. I start my tomatoes a couple months before they get planted out. At the end of the season there's a long, cold gap until the next season. It's more practical to just keep the seeds instead of the fruit flesh which will decay and stink in that time.

So does it work? Of course, that's how the fruit is designed to work. Is it practical for most people? No. Unless you aren't particular about what types of tomatoes you grow and are happy to just have a red, squishy ball you can eat. If you're going to spend the time to grow tomatoes, spend the $3 to buy a packet of seeds or save seeds from heirloom tomatoes you grew previously.

I found the video out of curiosity and I didn't have that "duh! why didn't I think of that!" moments it was just plain "duh!".

I think they will sprout even if they are GMO seeds, they just won’t flower. I did the slices method last year. Had tons of sprouts, some free to full size, nobody flowered.

Yes, if the tomato (and seeds) are "ripe" enough. Immature seeds won't sprout very well, if at all. They also won't sprout if it's some type of hybrid of GMO plant that produces sterile seeds, which is how some seed companies make money.

If you want to collect and use seeds from your veg use "heirloom" seeds, they will not produce sterile seeds and the children from the seeds will have the same properties as the parent fruit.

Cherry tomatoes are famous for coming back on their own the next year from fruit that has dropped.

Not the answer you're looking for? Browse other questions tagged tomatoes seedlings germination fruits or ask your own question.