Lilac tree has branches without flowers

My parents have had a lilac tree in their backyard for about 25 years. It came from saplings given by a neighbour. Over the years, some secondary shoots ("suckers", I think?) were removed as they broke under the weight of snow. Up until a year or two, it bloomed consistently every spring. 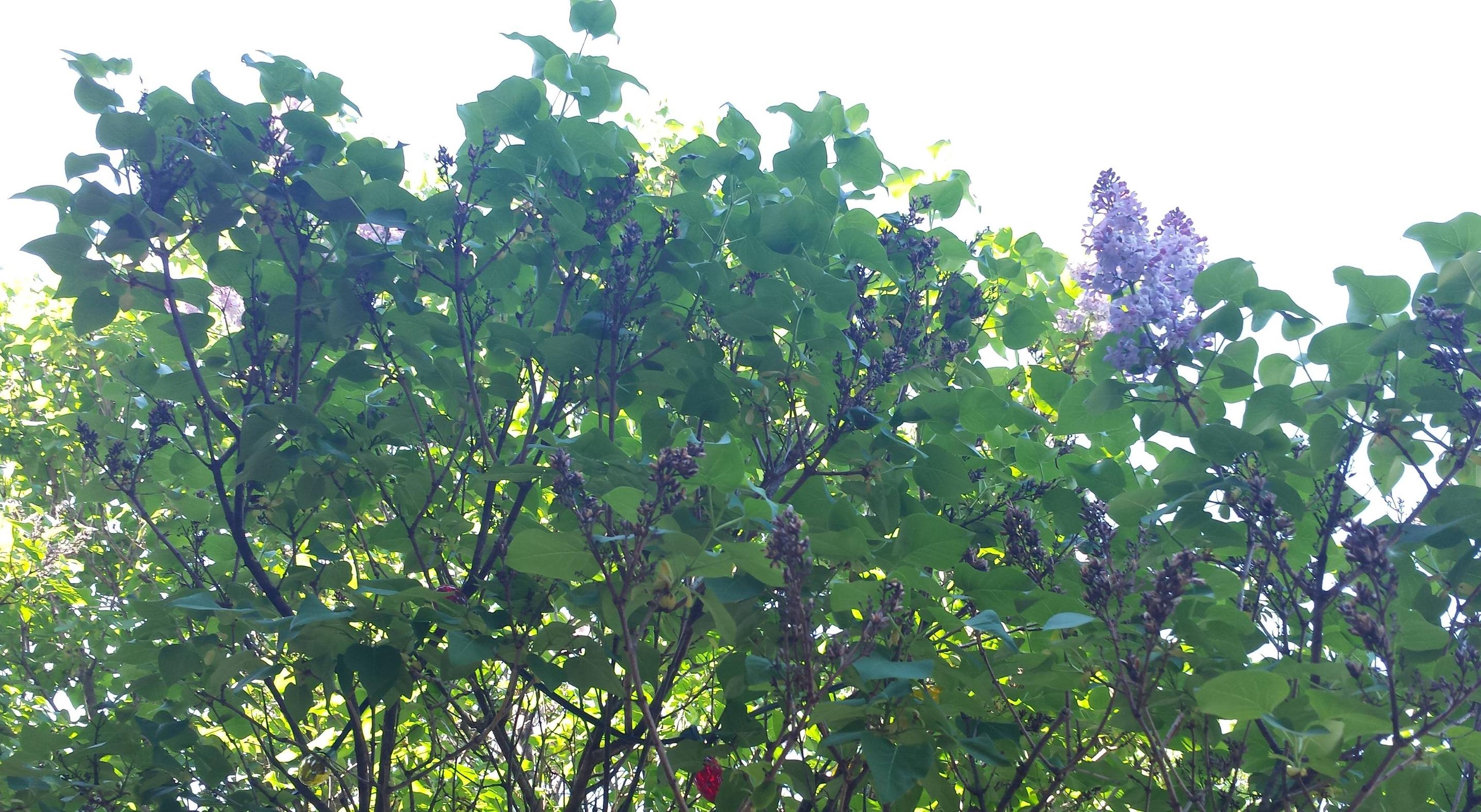 Large areas of the top have no flowers, only dried bits from last year, although all branches have leaves. There seems to be three main shoots that are devoid of any flowers. 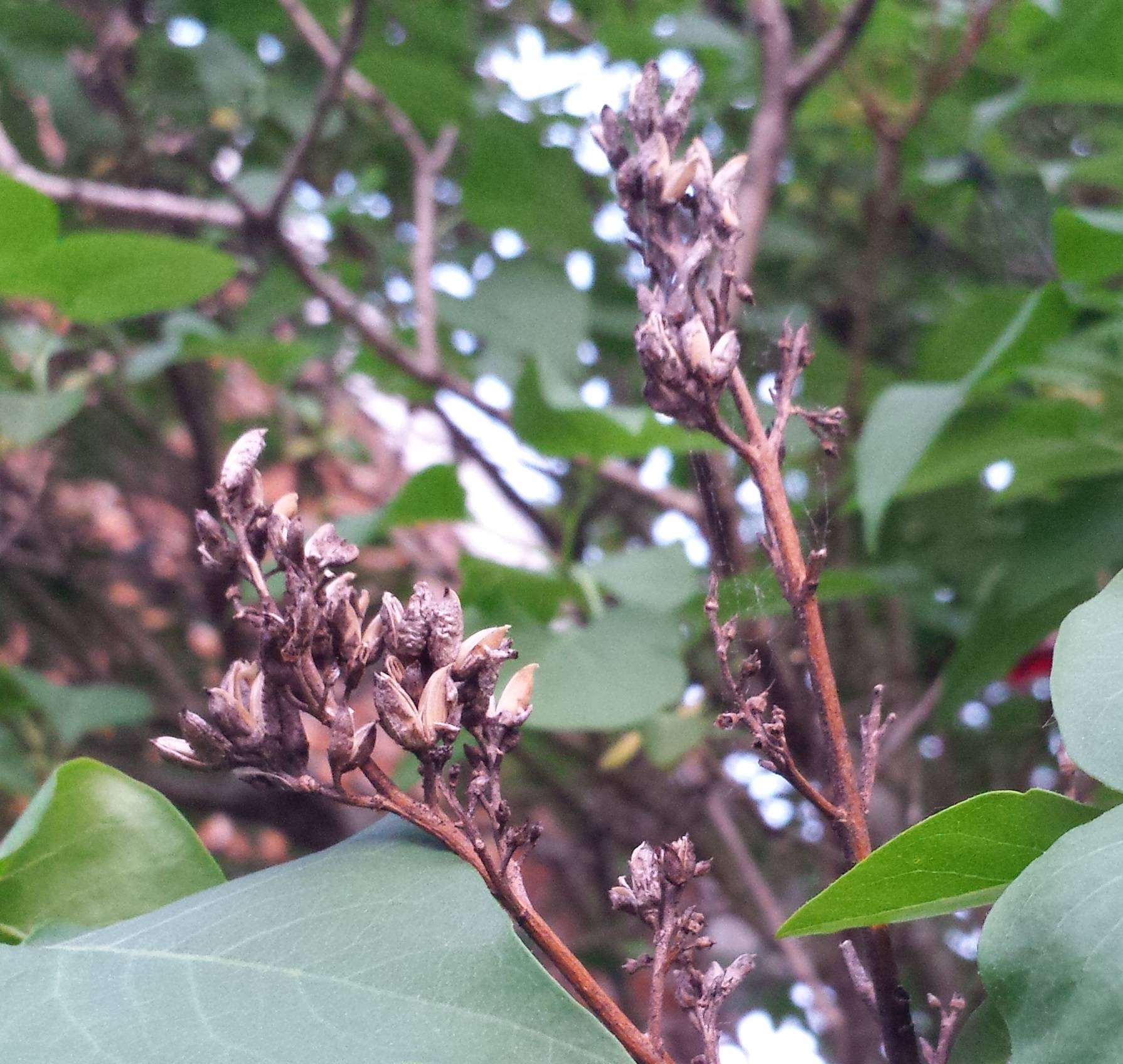 On the older shoots, there seems to be moss or some white stuff on the bark. I don't know whether this is normal.

I don't think my parents have done any pruning of this tree over the years, except for removing obviously broken branches. They are now thinking about cutting the base of all the trunks that have no flowers. I asked them to wait until I could verify whether they could be salvaged. Is there anything we can do to make these trunks flower again?

Flowers are an apical meristem, which means flowers occur only at branch tips. Hence if one never prunes their lilac bush, it winds up being exactly like what you have - a bunch of long stems/trunks with possibly a flower cluster way up high at each stem/trunk end.

The basic principle of pruning is that decapitating (or pruning off the end of) a stem will release latent buds that will produce new shoots (more branches). With a lilac, one can remove a significant length of a stem to lower the canopy and this will as well produce more shoots which means it multiplies the number of potential flower sites. You can even go so far as to chop the entire lilac bush down within a foot or so of the ground in late winter, and it will regrow. You can do this if you are frustrated and just to start over creating the bush. However, it takes about 3 years before it will again bear flowers like you want.

So, instead, you might want hard prune about one-third of the stems this season (anytime until the flowers have completely faded/browned is okay). Prune down to a level below where you want to have the canopy in three years (about half that height). Next year do another third and the year after next, the remainder. Obviously, choosing stems scattered throughout the tree each time will give you the smoothest transition, but it is strictly up to your preference.

One should also do some maintenance pruning every year after flowering (that is if you want the flowers; else you can do it before) just to shape the plant - keep it looking open and pretty. You can easily make a bush covered with blossoms, a shorter broom with flowers only at the top, or some other style with just a simple annual pruning/shearing. If it starts turning into something you don't like simply change where you cut to make it be more like what you want.

Not the answer you're looking for? Browse other questions tagged flowering lilac or ask your own question.

8
Why are my lilacs dying and what can I do about it?
5
What are these nodules growing on my miniature lilac?
4
Dying French Lilac
3
Crab apples haven't flowered this year - could a warm winter be to blame?
5
Pruning a Lilac in November (South East, UK)
6
How to manage fruit-trees blooming for the second time in autumn?
2
Apple tree only flowering on one side
1
Flowering plant identification and why might flowers not open?
4
Lilac Tree Branches Suddenly Dying