How should I treat a weigela bush with a large section of dead branches?

I have two weigela bushes which have been healthy for at least five years. (That's how long we've lived here, so I can't say their exact age.) I don't know the specific variety, but it has variegated leaves and pink flowers.

I'm in Northeast United States, Zone 6 (−10 °F, −23.3 °C ), and they're quite hardy. They bloom for a month or so beginning in May, and again when the weather cools off in September or October. The leaves remain beautiful for many months, often beyond the first frost. Twice a year, after the flowers drop, we prune them to maintain a shape and size we like. We leave the bottom leggy because it's a resting place for small birds we wouldn't otherwise see.

It's currently mid-May, and one is becoming more lush and full of leaves each day, and budding on schedule. The other has many brown, brittle branches which appear to have died. Some look totally lifeless, while others are bare at the base and tip, but have some off-shoots in random mid-sections which have new foliage and the beginnings of buds.

A close examination doesn't reveal any unusual growths or mold on the wood, although the picture on the bottom right does show some stripping on a section of an older branch. The new leaves are free of bite marks, curling, discoloration, or anything I generally associate with insects. There are no holes around the base, so I don't think chipmunks, squirrels or rabbits or our other usual visitors have been digging at the roots. There are some shriveled looking leaves in sections of the dead wood, but I'm pretty sure they're left over from last year, as that's common and happens to both plants.

The bushes are a few feet apart in the same soil, which we don't treat with anything, especially pesticides. They experience the same weather conditions. The shape of the affected one hasn't been altered, and none of those branches have snapped beyond what we pruned. In fact, up until the other plant behaved as expected, we assumed they were both fine, just preparing for the spring. I waited before becoming concerned as I thought it might just be running behind the other in terms of timing. Sadly, though, I see no signs of life at all on the affected branches.

The brown sections are brittle and easy to break off, although I haven't done so, because I'm awaiting advice. I've considered cutting off the totally unproductive branches and pruning back the others to the point of the new growth. However, a friend told me the plant is using all its energy to produce growth in general, and those scattered sections may be doing more harm than good. Obviously I'm going to lose symmetry either way, although I suppose I could prune the other to match! My bigger concern is the future of the bush.

What should be my next course of action? 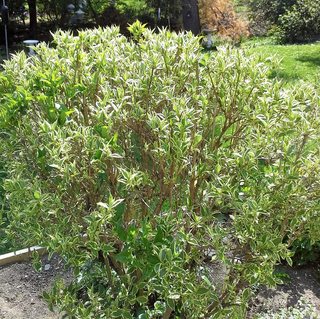 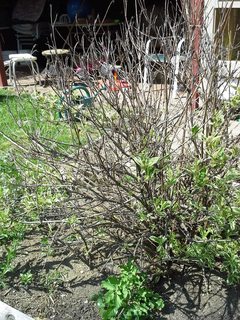 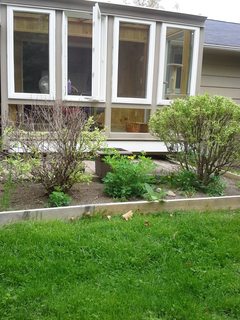 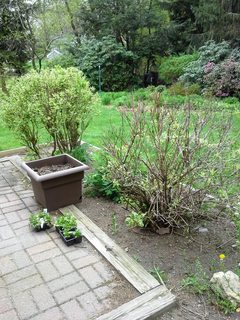 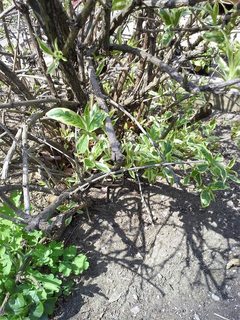 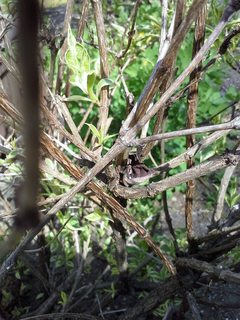 Update as of August 2016, three months after the original post: We partially tough-loved it, meaning we cut down all the dead sections to the root level, and left the rest alone. It was lopsided and looked silly (still does because we haven't trimmed it), but it grew back already, and even has a flower! 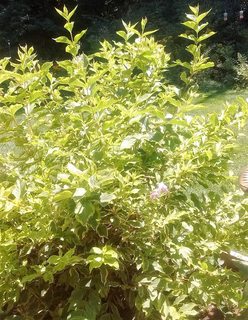 If this plant still has a good root system and is not dying due to being water logged or root rot then the tough love approach works:

If it does not come back you have lost nothing.

Not the answer you're looking for? Browse other questions tagged pruning shrubs damage dead-branch or ask your own question.

5
How & when should I prune a Weigela bush?
8
How do I kill a butterfly bush so it stays dead?
4
How to prune my sad rhododendron?
9
How can I save Yew bush branches severely bent by snow and ice?
6
How should I treat overgrowth on tree line?
8
How should we treat cracks in the stem of Aloe Veras?
3
Should I prune old dead sections of my rose bush while new growth is appearing at the base?
6
How should I prune my persimmon tree that has a lot of thin branches growing upward?
1
Cutting bush down to manageable size