What kind of grass is this, and how can I keep it out of my garden

I have a thick, beautiful lawn that borders my garden. Unfortunately, I am struggling to keep the grass from infesting my garden. I have used a variety of herbicides, mostly RoundUp, along the garden border, but nothing I have used so far seems to have much of an effect. My only success in controlling this grass is to dig it up, but this is difficult due to the deep root system, and often requires that I uproot healthy garden plants in order to remove the grass and its roots.

I want to identify this grass, which I hope will help me learn additional ways to control it. The identifying characteristics include long root runners that look like the roots of bamboo. 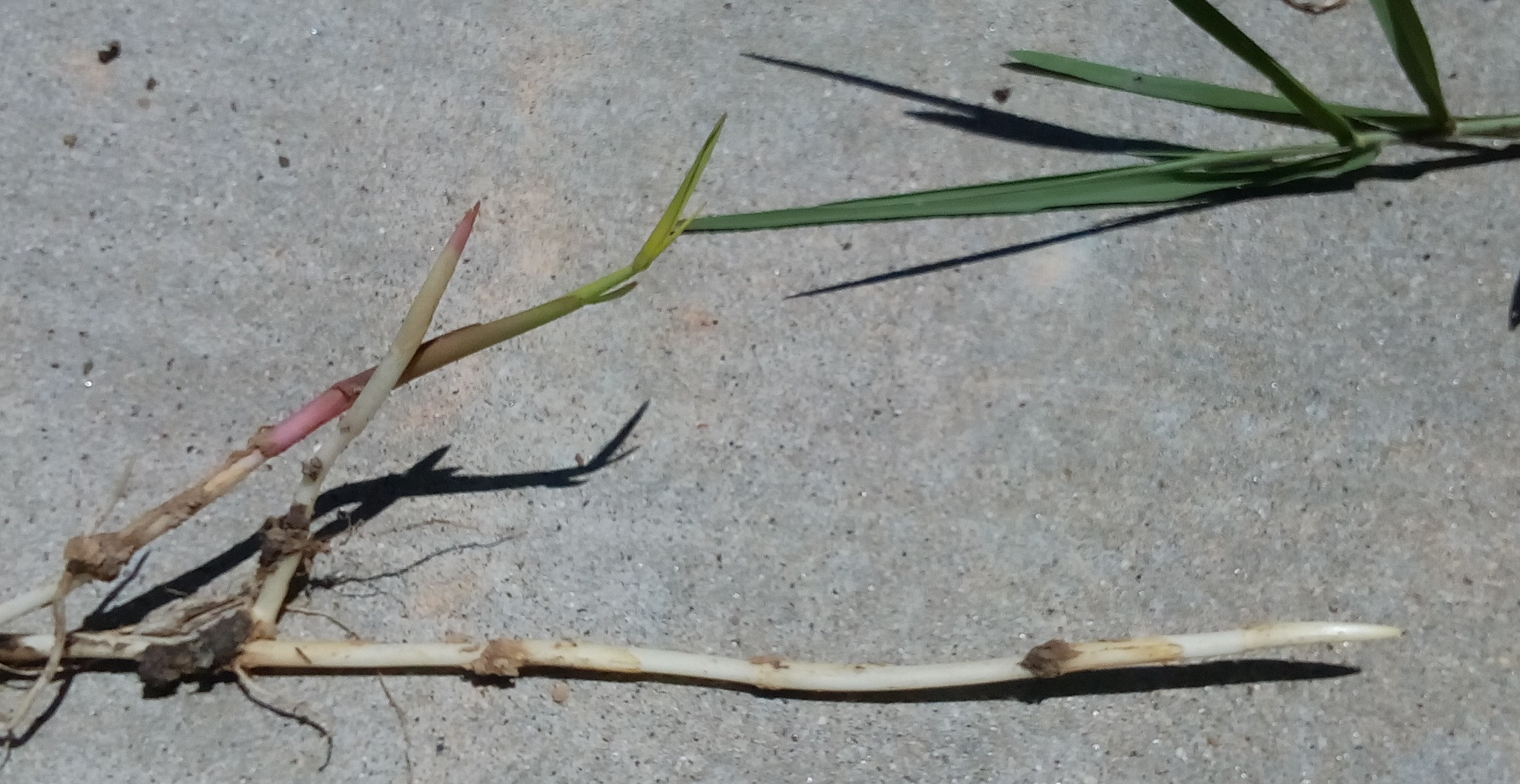 Another feature is the presences of nodes in the root system, from which many large and small tendrils extend. These nodes tend to appear at depths up to 4 inches or so, but the runners tend to run rather deep in the soil, often reaching down 8 inches or more. The following image shows the root node of a small grass clump. 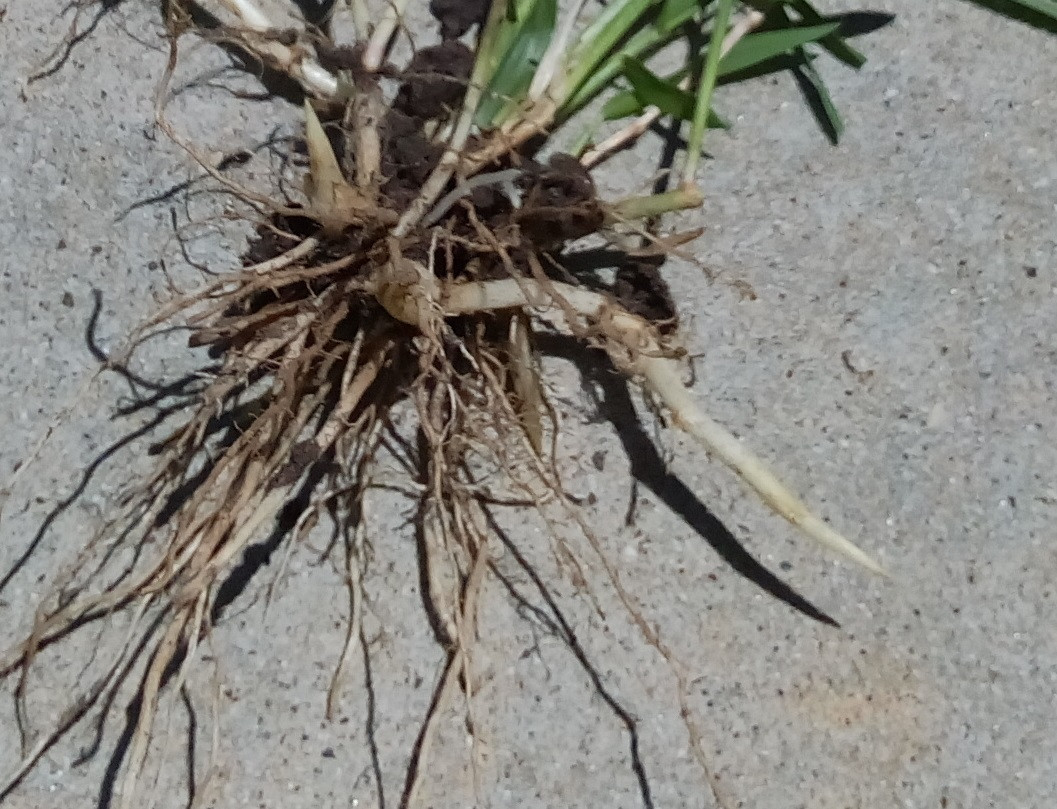 And here is the foliage of this same grass clump. 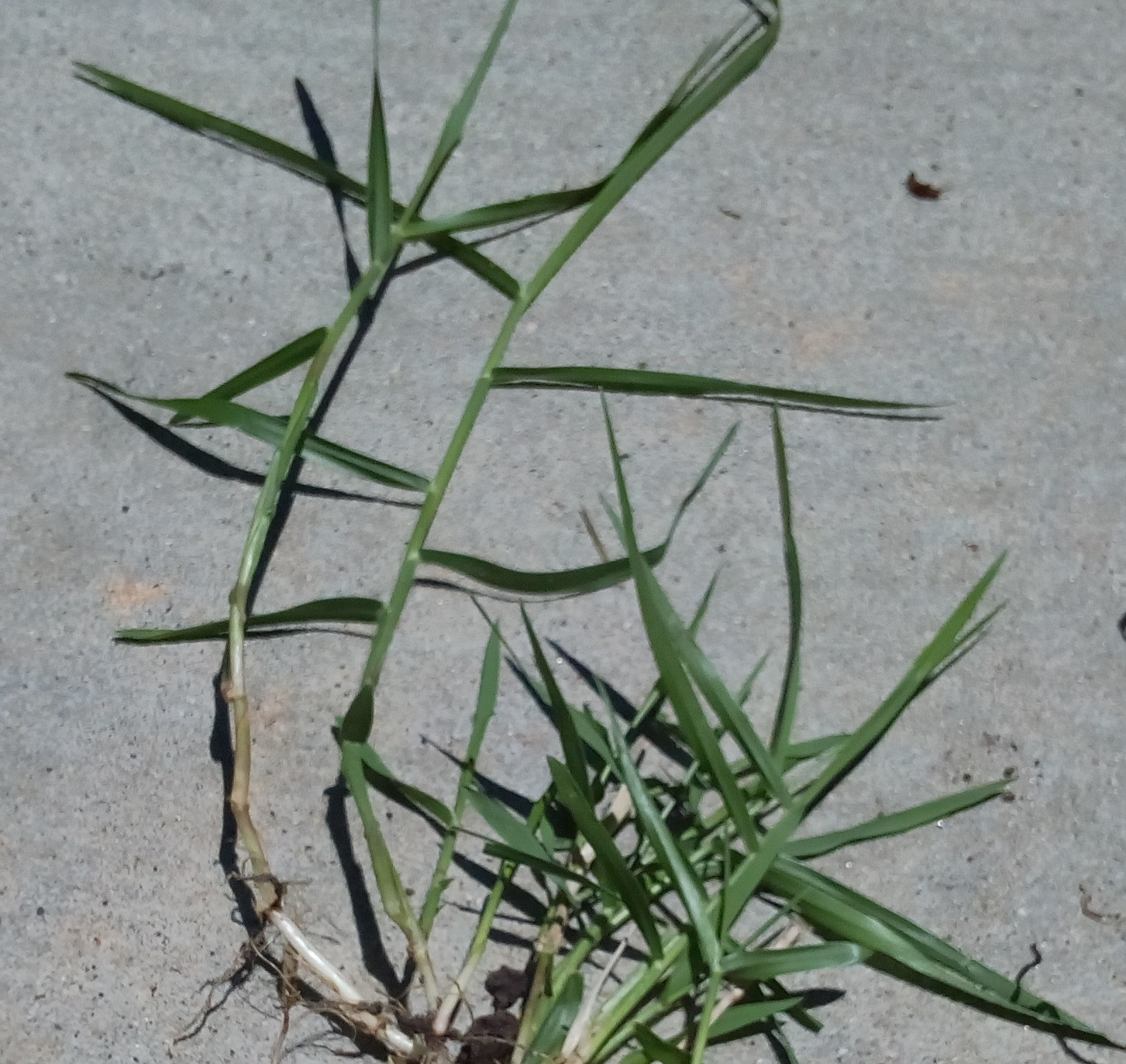 I will appreciate any help in identifying this intruder and some means of controlling it. I have been fighting it for several years, and am hoping that there is a tactic other than sinking a deep root barrier to keep it out.

Oh, and this is probably important information: I am located in southeast Texas, north of Galveston Bay and east of Houston.

Both GardenerJ and alephzero appear to be correct. I accepted GardenerJ's answer as the correct one, only because he answered first. Thank you both for your answers!

Elymus repens (also known as couch grass and quackgrass, and, according to Wikipedia also as twitch, quick grass, quitch grass (also just quitch), dog grass, scutch grass, and witchgrass) is nasty and difficult to control. My whole lawn was originally planted with St. Augustinegrass, but the quackgrass also appears throughout.

I have been successful in extracting it manually, but it is never a complete job, and you have to keep after it. After extracting every bit that I can find in the garden (sometimes the rhizomes are as long as 5 feet long), I keep looking for new foliage, and dig that out as soon as possible.

I have used RoundUp along the garden perimeter, and that helps, but the rhizomes run deep and can survive the poisoning. Also, it is necessary to keep the lawn cut, in order to prevent the Elymus repens from going to seed.

With those long underground rhizomes (the thick white runners you see) and upright growth this appears to be quackgrass (Elymus repens).

Unfortunately, controlling it isn't much easier with that bit of knowledge. Quackgrass is a tough competitor. There are no selective herbicides that can kill it without killing the lawn grass, and as you've discovered digging it up is... challenging. It's roots go very deep, and it can regrow from very small segments of rhizome that are left behind.

Your long term options are drastic, you could use Round-up to follow the quackgrass back into the lawn to get rid of the quack. But then you'll have to re-seed the lawn. Or, you can try putting down a deep root barrier. I know that's not what you wanted to hear, but I think it's the least painful option available.

In the UK it's called "couch grass", or (possibly a dialect word) "twitch."

The bad news is, there is no "cure" except total extermination. Digging up the turf to a depth of 5 or 6 inches and leaving it upside-down on the surface to dry out in the sun will kill it. Burning the turf after it has dried is even better, if that doesn't violate your local laws. You can re-use the ash and sterilized soil after burning.

If you are in a cold climate, you can leave the turf upside down through the winter and the frost will kill the roots, but that is probably irrelevant in Texas.

Another way to remove it after digging and inverting the turf is to get some chickens, which will pick the rhizomes out of the soil and eat them.

Attempting to dig it out piece by piece is futile, because every tiny broken bit of rhizome will quickly re-grow.

Roundup will work best if you first cut down all the leaves and apply it to the new growth, but don't do any cultivation until at least two weeks after it looks "completely dead". Otherwise you will break off small pieces of rhizome which have not yet been killed, and they will all grow back again.

Not the answer you're looking for? Browse other questions tagged weed-control grass weeds or ask your own question.

8
How do I control the broadleaf weeds taking over my centipedegrass lawn?
5
What is this weed and how can I kill it?
6
Identify this grass and provide hints on removal
5
Can bent grass be controlled without toxic chemicals?
4
How do I get rid of phragmites in my lawn?
4
How can I remove the orange stains left by grass weed and feed?
4
What is this whispy grass stalk with a red base and thick woody roots, and how can I get rid of it?
5
What are the benefits of putting grass in my garden, what precautions should be taken
2
Is this an undesirable grass or a weed?
1
What is the best way to de-weed a lawn?