Is this a sideshoot (sucker) on this Cordon Tomato Plant?

It's my first time growing tomatoes. I know that I have to remove the suckers (sideshoots) for the cordon (indeterminate) variety, but this is a little bit difficult to me as it's my first time. The image below is for my sweet aperitif cherry tomato plant. Can you please tell me if the part in the red circle is a sideshoot or not? 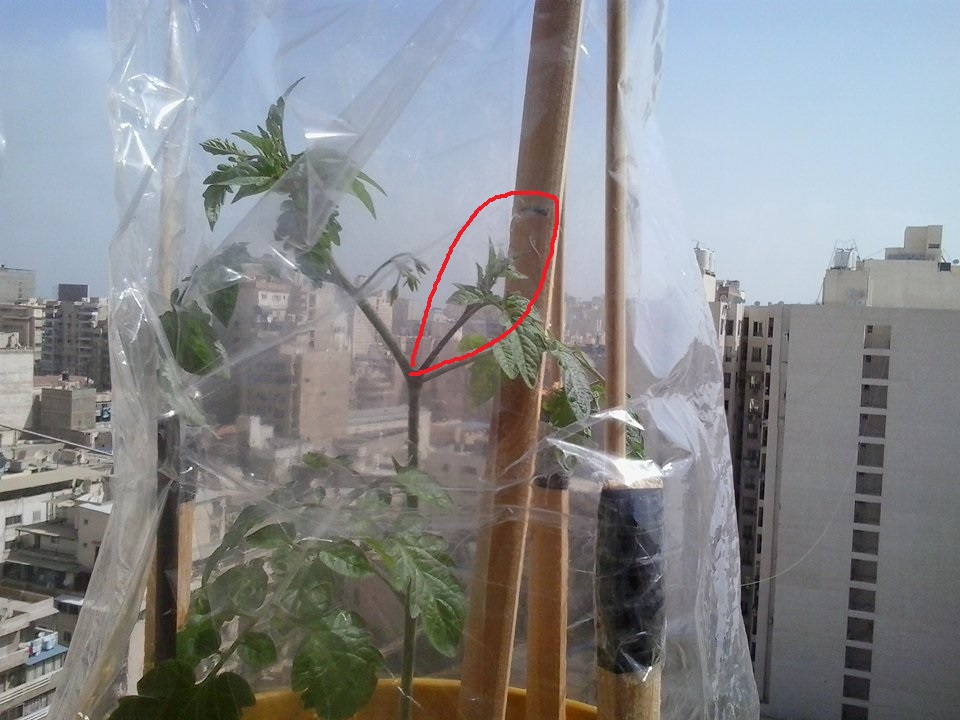 plant-care tomatoes
Share
Improve this question
edited May 4 '16 at 22:26

I thought yes, at first, and then I noticed that the thing just below the red circle appeared to actually be a tie, rather than a leaf stem. If so, that's just a leaf stem, there is no shoot there yet, and if you are following the pole you want another tie above that one, since your main stem is veering away from it.

The shoots one typically removes appear between the main stem and the leaf stem, so they are always the centermost of 3 bits of vegetation right at a leaf stem. If I'm not seeing what I now think I'm seeing, and there is a leaf stem rather than a tie just below the lower part of the red marking, it's a shoot.

I wouldn't class that as a sideshoot - it's just the top of the main stem has divided into two and is growing in opposite directions. A side shoot would be appearing between the existing leaves, off the main stem, usually lower down, so I'd leave it in situ.

Following Ecnerwal's answer below, I've had a closer look at the picture. Not sure about the reference to a tie, but where you've drawn your red line in the picture, the bottom part of it, is that covering what looks like a branch or stem with leaves on the end of it? Which would mean the entirely visible top stem with leaves on the right is a separate stem growing out from that junction? If so, you could remove one or the other, but frankly, it isn't really necessary, it's more the ones that arise lower down the plant as time goes on you need to worry about.

Not the answer you're looking for? Browse other questions tagged plant-care tomatoes or ask your own question.

27
How can I prevent squirrels (or other small mammals) from eating my tomatoes?
6
How should I be fertilizing my container tomatoes?
7
Are my tomato plants damaged by a chemical or a disease?
20
Which tomatoes grow the best in high temperatures?
8
Should I remove tomato plant leaves to Increase yield?
3
Bite marks on tomato leaves
5
Help with tomato pest problem
4
Tomatoes: what is causing leaf discoloration and brown spots on plant? Blight, fungus, or something else? (Pictures Included)