Is it good or bad to have mushrooms growing in the soil of my fruit tree?

As you can see I have mushrooms in my soil. Are they bad? Are they going to cause root rot in my plants? Also, are the mushrooms infectious through the air?

It's my testing soil. I plant different plants in here. 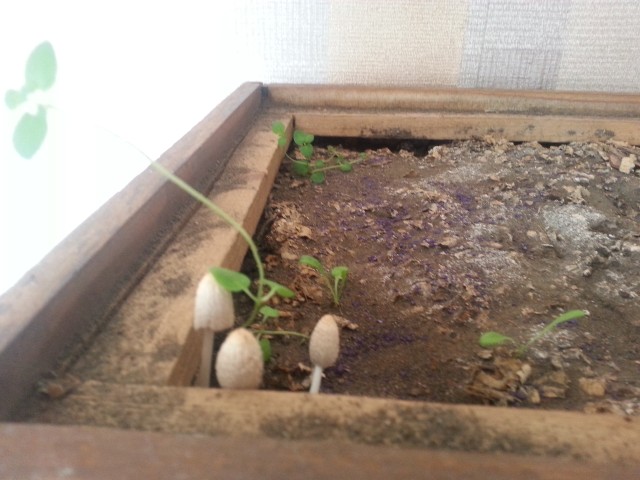 fruit-trees plant-health mushrooms
Share
Improve this question
edited May 5 '16 at 0:07

While I don't know anything about those particular mushrooms, I'm confident that they're not a problem. In fact, they might be a sign of beneficial microbes (maybe not). However, your soil looks pretty wet. A lot of people think overwatering contributes to root rot. Infected soil, low light, no ventilation and such are also factors.

Pythium, one of the pathogens that can cause root rot, spreads through water. Although it might spread through air (I don't know that it can), it typically doesn't. Fungus gnats can spread it, however, if Wikipedia is right.

I've personally found that 2700k CFLs and/or lots of sunlight can keep damping off (and thus pythium) away in my area. Damping off is a more frequent concern in my area than root rot. In my area, it's invisible and primarily affects seedlings and cuttings. It seems to affect plants that aren't growing due to soil conditions, too.

There may be other soil pathogens in your area, though.

Your soil looks rather wet. You might be over-watering. I don't know what you're growing, though.

Your mountain soil appears to be topsoil, in which case it likely has pythium in it. So, precautions against root rot are especially necessary, I think (at least if this is an indoor container). But the mushrooms aren't the concern.

Even if mushrooms spread through the air, they shouldn't be difficult to remove, and they most likely won't cause problems. Overwatering can cause problems, however.

They look like Coprinus of some variety, and they're not a problem at all. If you want to reduce their spread, twist off the caps and stalks as they appear with a plastic bag over your hand - some mushrooms disperse spores from the gills beneath the cap. However, the mycelium (roots) from these will be present in the soil you're using, so you may see further crops of these at times. They are not related to any kind of fungal root rot, and will not cause that sort of problem. There may, though, be other pathogens present in the soil you've used if you just took it from outdoors, because it's not sterile, so there's always a risk of problems when using soil taken in this way within containers.

Note: although I've said they may be Coprinus, and they are generally edible, I do not recommend you eat the mushrooms without a full and definite ID, for which a better, clearer photo and a mushroom expert would be required.

Not the answer you're looking for? Browse other questions tagged fruit-trees plant-health mushrooms or ask your own question.

14
Is this mushroom going to make my black radish taste weird or be poisonous?

16
Can I grow a fruit bearing pistachio tree?
8
Mushrooms sprouting for the first time, should I gather them or let them be?
5
An unexpected brown-violet mushroom in my garden
14
What are these brown, cap-shaped mushrooms on my birch tree?
3
Grow oyster mushrooms in vacuum cleaner bags?
2
Is this soil any good?
1
Very heavy smell while growing oyster mushrooms