What does a sunchoke look like right after it begins to sprout?

seedlings sunchoke
Share
Improve this question
edited May 2, 2016 at 19:31

The sunchoke, also frequently called Jerusalem artichoke, is a species called H. Tuberosus, in the Helianthus genus of Asteraceae, which is a large plant family that includes sunflowers and daisies. Even though it grows from a tuber root rather than a seed, the plant when it emerges looks very much like any other flower in that group.

The Ohio Perennial and Biennial Weed Guide shows an excellent progression of the stages of the plant, beginning with the answer to your question.

The first leaves to emerge (cotyledons) have a united base in the shape of a short tube. Young leaves are elliptic, dull green, and covered with short stiff hairs.

This is a picture of a newly sprouted plant. 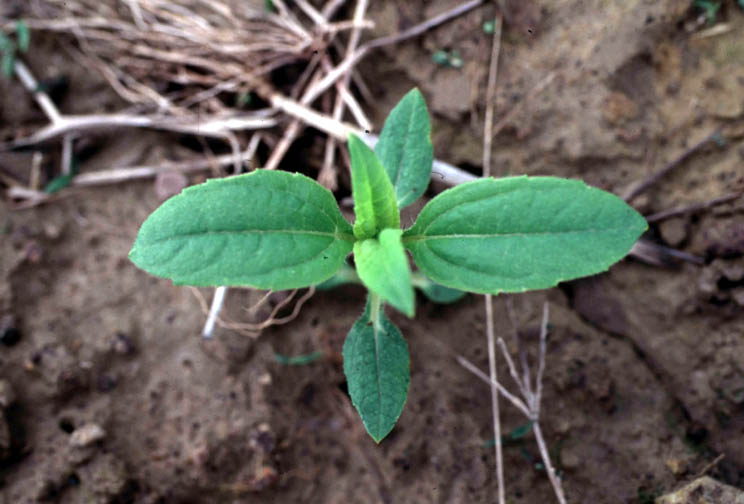 This picture is of a group of young seedlings, in the stage right after the first appearance of leaves. 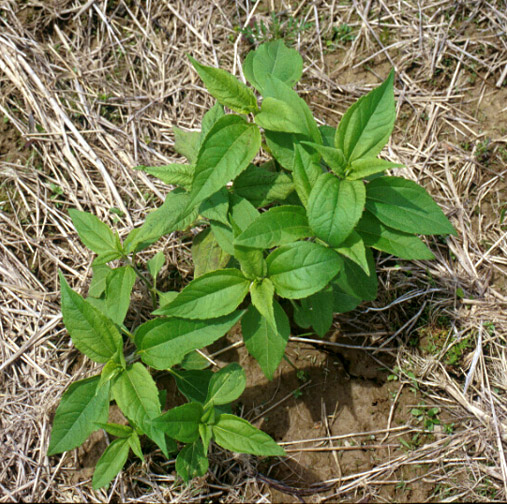 Although they're currently normally grown from tubers, they can be grown from seed, according to Joseph Lofthouse, who has a blog with Mother Earth News, and is known for breeding landraces in northern Utah for many kinds of plants. He sells the seeds, too. However, you need to have two genetically distinct plants, if you want them to produce fertile seeds (and you may need to bag the blossoms after pollination to keep birds from eating too many of them). Commercial tubers may or may not have cytoplasmic male sterility (so, if you want to grow seeds, you may need to actually buy seeds instead of tubers to start with, at least for the pollinating plant). Kansas Native Plants sells true seeds, too.

Here's a link that shows pictures of seedlings with cotyledons. (It is also a source for some of the other information in this answer.) The cotyledons in the picture look a lot like those of sunflowers, but the first true leaves in the picture, at least, look like somewhat pointy green tongues (complete with tastebuds) with a bit of fur on the sides, without much of a line down the middle (and flatter than tongues, of course).

Not the answer you're looking for? Browse other questions tagged seedlings sunchoke or ask your own question.

6
How often do you get a sunchoke that looks like ginger?
5
I've read that butterflies like sunflowers, do they also like sunchokes?
3
How much should I water sunchokes to get a patch going?
2
When do sunchokes "bolt"?
2
What procedure should I do when I water my sunchokes?
1
My sunchokes are acting like beacons for japanese beetles, should I do anything?
3
What causes the stems of sunchokes to turn red and lower leaves to die?
5
What kind of plant will my Red Cherry Plum stems grow into?
2
How far apart should I space Jerusalem artichokes?