Can I transplant grape hyacyinths while in bloom?

Last fall I planted a number of small grape hyacinth bulbs in my garden. It's now spring, and they're all in bloom, but instead of being in the garden, they're spread throughout the lawn. My suspicion is that they were moved by a chipmunk or something else before the ground froze.

My husband is planning his first lawn mowing of the season, so if I don't move them, he'll mow them down. He's also going to do the spring filling of holes and lawn re-seeding, so if I'm going to dig anything up, now's the time. In his defense, they're virtually impossible to mow around, and I wouldn't ask him to baby them in that way!

I assume that if I just leave them, they'll continue to naturalize in the lawn, but I'll have the same problem next year when there are twice as many, none of which will be in the garden.

I understand they're not that expensive or difficult to replace, but if I can save at least a few, I'd like to. I'm not as concerned with losing the flower now as I am of killing the bulb at this sensitive time. If transplanting now is likely to prevent them from blooming next spring, I'll just leave them alone.

I've seen this question, which is similar, although my flowers are farther along in the bloom cycle, and I only want to move them once, and into a garden rather than a pot. If the same advice holds true, though, I'd consider this a duplicate.

Most of the advice from the (possible duplicate?) other question holds true - dig them up, plant in the new spot, they should be fine.

Just make sure they get enough nutritients at the new place to fill up energy for next year. For those you transplanted, I'd recommend you cut off spent flower stalks to make sure all energy goes into the bulb, for this year at least.

Muscari are in one point different from ornamental tulips: they also multiply from seeds, at least some kinds. If you let the spent blooms wither, they will drop their seeds which will then grow to tiny plants that look like blades of grass or baby chives - be careful with weeding, mulching and working the ground: 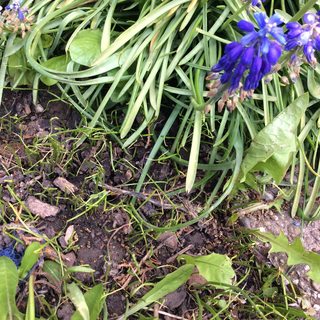 -> More details and pictures from the Pacific Bulb Society.

I suggest you dig up most of your muscari from the lawn, but if some are in a place where they can be spared from mowing, let those go to seed, collect the seeds and scatter them where you want them. You need a bit of patience, though, because it may take some time until they are mature enough to bloom.

You can move them now, but you need to keep the foliage intact - bulbs use their leaves whilst they're present to photosynthesize and store enough food in the bulbous root to enable flowering the following year. If you cut off or damage the foliage, you won't get flowers next year. That means, when you dig them up, you need to take enough of a plug of soil around them so they don't notice they've been moved, and retain their leaves. You can cut off the flower stems if you like though, but if you move them with enough of a rootball, that shouldn't be necessary. The trouble with keeping a good plug of soil around them is, obviously, you'll have some fair sized holes in the lawn...but its probably important to move them out of the lawn - they do love to spread, and certainly in the UK, are second only to wild onion/garlic in their invasive nature. Whether you transfer them to pots and plant out in the autumn, or move them into a border is largely irrelevant - in some respects, they'll be easier to care for in terms of water supplies in a pot, but that's up to you.

If these are the common variety I can certainly testify to their invasive qualities. Am still trying to get rid of them years later. There are other varieties that are not invasive and are more decorative. If you wish to keep these, the previous advice is very sound. Any bulblets that have been left will grown and can be mown off. These will eventually become exhausted and not regrow. Any bulbs you transplant will readily regrow and flourish, making a haze of bright blue in your spring garden.

Not the answer you're looking for? Browse other questions tagged transplanting bulbs grape-hyacinth or ask your own question.

3
How should I transplant tulips which are almost blooming?

12
How to start a bulb bed so that it doesn't need weeding?
5
Why did my grape hyacinths put out leaves in the fall?
8
In which part of the fridge should muscaris (grape hyacinths) be stored?
5
How many flowers can a single muscari plant grow?
10
When is the best time of year to transplant established strawberries?
8
Can a plant be too mature to transplant?
5
Transplant established bulbs in the spring?
3
How do I transplant walking onion?
4
Second Bloom for Tulips?
2
Plumeria Transplant Advice