I want to trim my rubber tree because it is too tall, but many of the leaves have fallen off. Now, there are only a few leaves left, and they are all at the top.

I water it about once per week and fertilize about every 3 months using 19-6-12 Osmocote smart-release plant food. I live in Seattle, WA, so it has been inside about October-April, and I just moved it outside.

Also, instead of cutting off the branch, I was going propagate the trimmed section into a separate plant using air-layering. But where should I cut it?

I think the plant hasn't been doing very well because it lost a lot of leaves over the winter while indoors. I just moved it outside, so I hope to strengthen its stores before beginning the trimming/air-layering process. 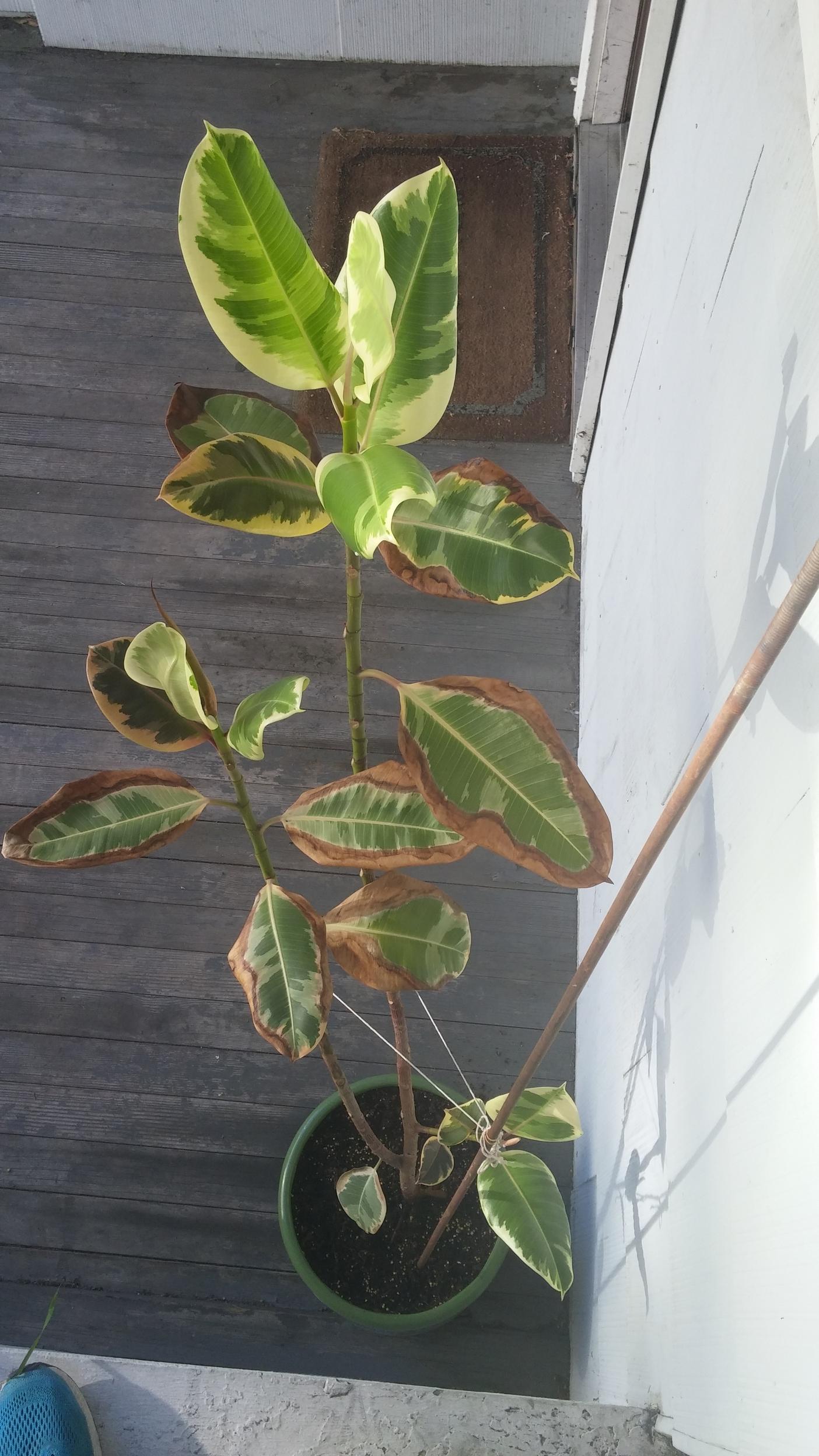 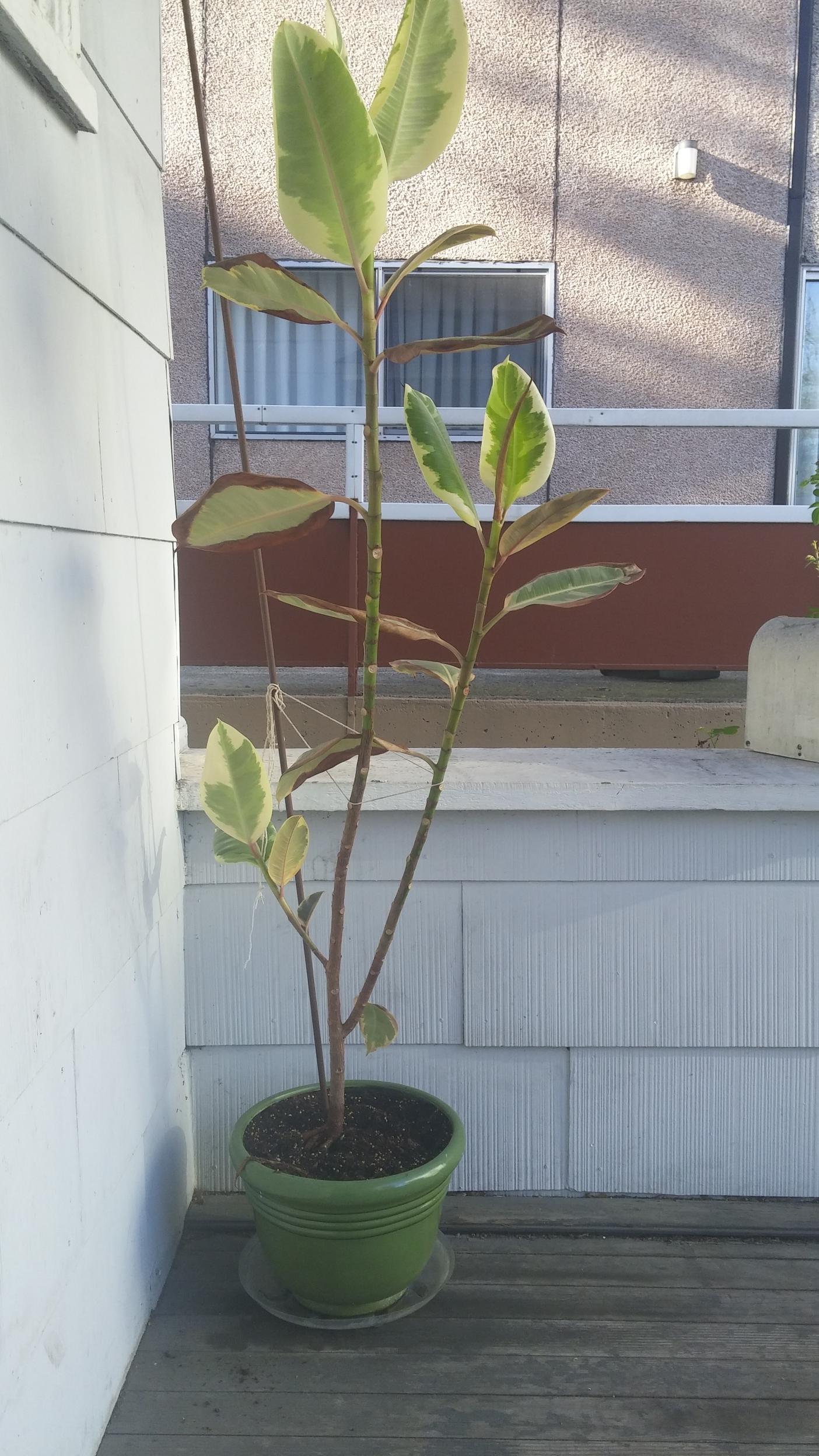 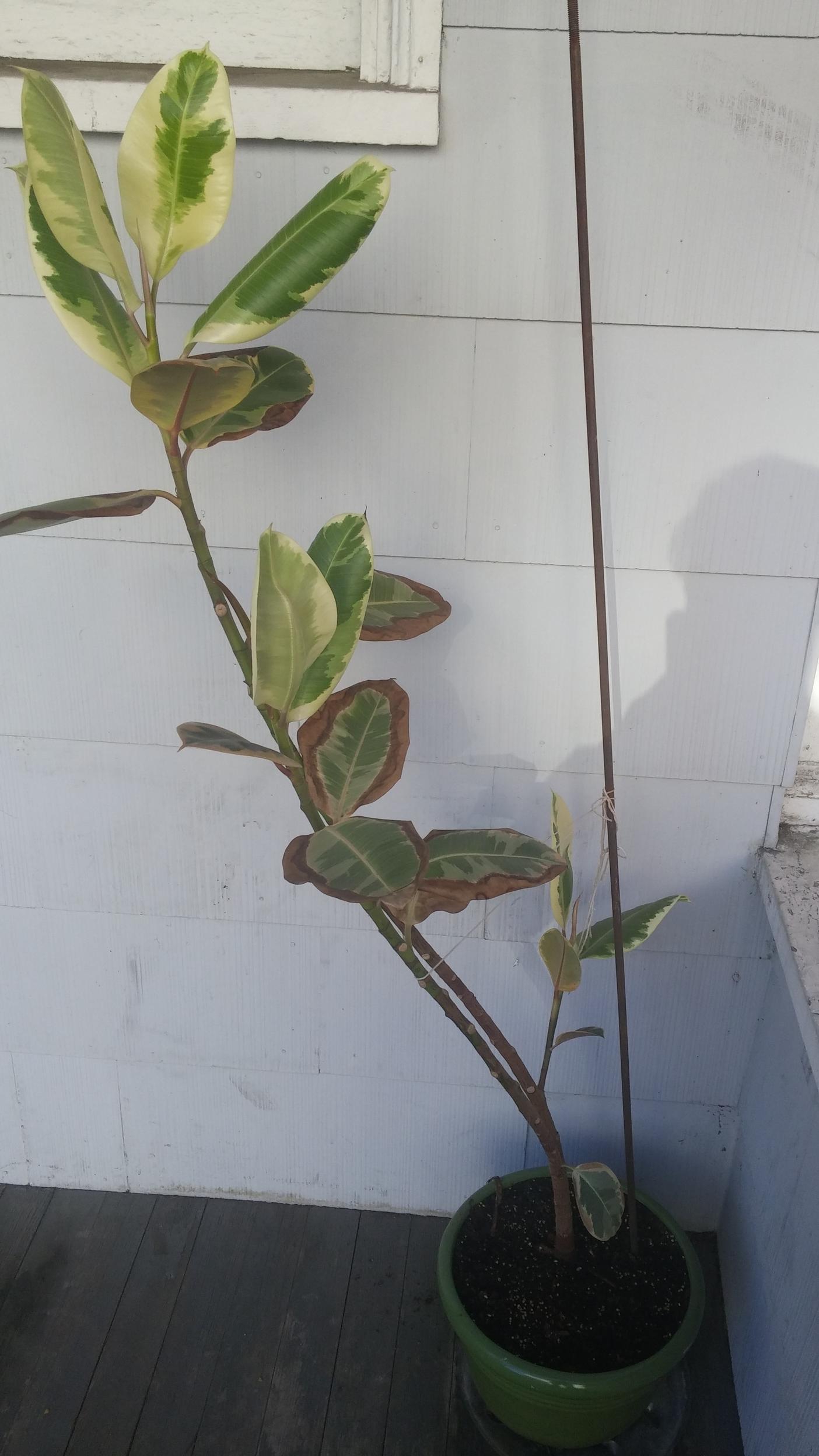 I think I will follow @stormy's and @Bamboo's advice by doing the following:

Does anyone have suggestions about the timing of these tasks? Here is my schedule: I repot first, wait 3-4 weeks, cut mainstem and propagate, wait 1-2 weeks, air-layer and propagate.

Also, just to be sure, where should I cut the mainstem and where should I perform the air layering on the longest remaining lateral? Here is a labelled photo of my plan: 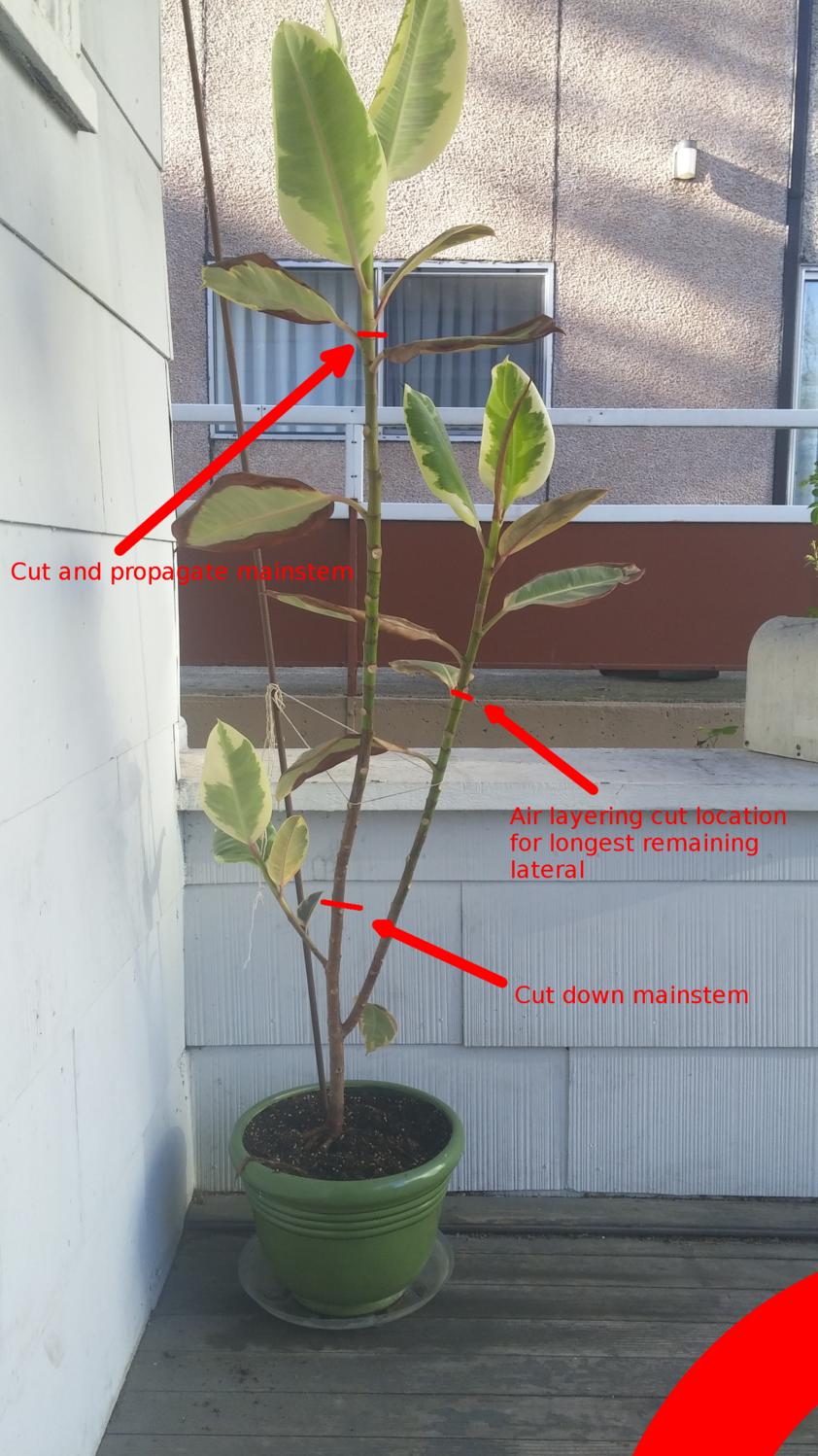 First, let me just say that you should not leave your rubber plant outdoors all night if you haven't hardened it off first - it needs to be acclimatized gradually, over a week or so, before its outdoors all the time, if its warm enough where you live for one of these to be outdoors during summer.

The plant as it stands is markedly unattractive because of the leaf loss and damaged leaves. I note there is a single main stem with two lateral stems, and because of its general appearance, I would be drastic and cut down the mainstem to the highest lateral, then use the small amount of growth on the top of the stem you've removed as a cutting, rather than air layering. Air layering can be a very slow process, up to two years sometimes, and in the meantime, you're looking at a plant with lots of bare stem and all the growth on top, with a plastic baggy attached to the side of the stem. Instructions as to how to do a cutting are in the link below, but basically, you need a cutting about 6-8 inches long, strip off the lower leaves, use hormone rooting powder if you have it and plant it into a pot with dampened, good potting compost, then cover with a plastic bag or similar to keep the moisture in and stop the cutting drying out.

Feed the main plant after pruning back. The lowest lateral branch does have many damaged leaves, and you may want to consider cutting that branch off later on, when new growth has been generated elsewhere.

UPDATED ANSWER - In light of a comment below, and having thought about it, maybe you could follow the route I've outlined, but try your air layering on the side of the longest remaining lateral (side branch) - that way, you've got two chances of creating a new plant, the cutting and the air layering. Given you've said it's too tall, it's only going to get taller this summer, with all the growth on the tops of the stems, so pruning some of the height off seems to be a good idea, and you might as well use the leafy growth as a cutting anyway.

Bamboo is correct but I just have to add your plant is suffering from high salts in your soil. Stop using tap water. I'd either flush this pot with lots and lot of water or better yet use good potting soil and replant this guy. Also it could use more light. Put it on the porch if the porch is in complete shade, no direct sun. Only water when the soil dries. And use distilled water or rain water. Tap water is too full of salts. The burning on the edges is the key. What are you doing for soil and fertilizing and watering?

Not the answer you're looking for? Browse other questions tagged houseplants plant-recommendations plant-care trimming air-layer or ask your own question.

5
How to grow new leaves on rubber plant after they fall off
4
How can I propagate a rubber tree plant from a cutting?

5
Where can I go to get a maintenance plan for my existing landscaping?
6
Brown spots on my Fiddle Fig plant
6
Which of these Air & Pollution cleaning plants best fit a window/ balcony in Mumbai Weather?
1
My anthurium's leaves are turning yellow and brown
2
Why are the leaves on my mint plant drying up and brown bumps are forming on the stems?
5
How should I care for my baobab?
6
Should I cut the top of my schefflera?
2
Aloe leaves turned gelatinous
1
Elephant Ear Philodendrum not doing well!