Recommendations on fixing my uneven lawn

We had a deck removed recently and had sod put in about 10 days ago. The problem is the soil was not leveled prior to the sod being added and now the new lawn is taller than the rest of the lawn. I tried removing the sod by hand, but with all the water and rain it is already stuck to the ground.

We have St. Augustine sod/grass and the area which I am trying to fix is mostly sunny. We live in Texas.

How would I go about leveling the area? If it is possible I would like to save and reuse the same sod/new lawn. 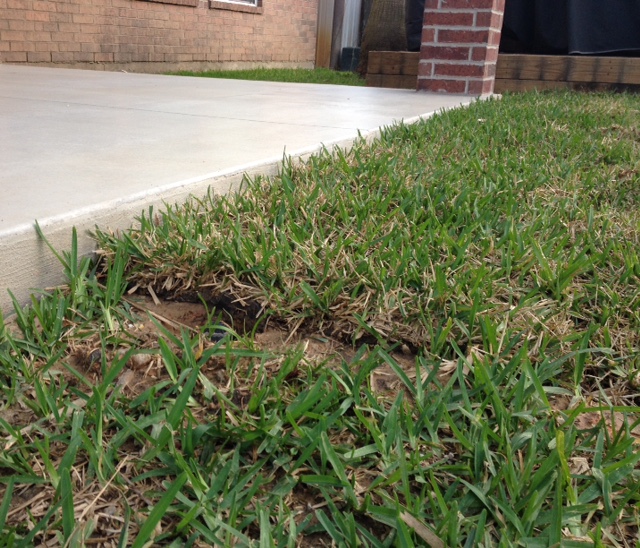 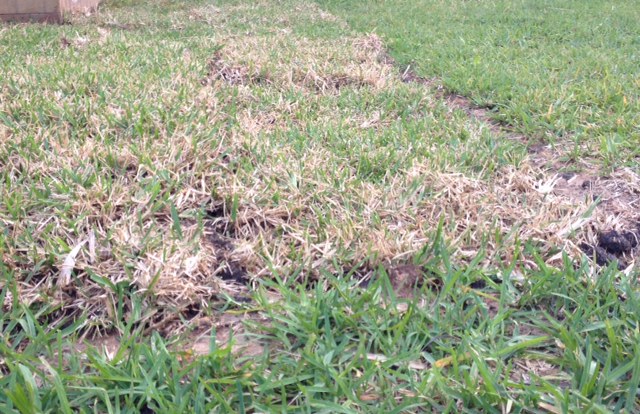 lawn grass lawn-repair
Share
Improve this question
edited May 9 '16 at 15:24

I think you should go ahead and fix it now. Your sod is trying to grow into the ground, which is why it's stuck, but I think it's one of those things where you'll regret it if you don't fix it. Even if you damage the grass and loose some, at least you won't have a bunch of time and energy into it.

It doesn't look like a big area. Just take a square-nosed shovel and have someone lift it while you scoot the edge under the sod. You'll be cutting the roots attaching it to the ground. However, it still has plenty of good roots in the sod's soil. Roll it up if it came that way or set it to the side if it was in squares.

Hose it down so the roots don't dry out while you're leveling. The level your ground and get it back down as soon as possible. I would probably rent a tiller if you don't have one and run over the whole area to loosen the soil. Maybe amend it with some organics if you don't naturally have them in your yard. Then level your area off.

It's a little bit of a guessing game at this point. You need to the dirt the sod will be placed on, lower than the surrounding soil to compensate for the thickness of the sod. However, after you've 'fluffed' it up with the tiller, it's going to settle some. It'll have a lot to do with the type of soil you have as to how much it'll compact. I'd probably try to press it down to get most of the settling out of it. The soil will still be plenty loose, but I'd walk on it or throw a piece of plywood down and run over it with the mower a few times. You can probably just run your mower over the area period.

I'd also opt for a little low versus a little high, because you can always add a thin layer of compost over the top every year and the grass will grow up through it. You can eventually get it perfectly level that way. Good luck.

6
Identification and Removal of Rogue Plant
2
Is it common to only sod a portion of a lawn?
5
How should I flatten my uneven back yard in Toronto?
7
Recommendations on fixing my lawn
8
Growing a healthy lawn
6
Did I use enough grass seed on my new lawn?
1
Removing the sod and seeding new for an area 24'x48' (8mx16m) - advice needed
1
How to stimulate recently-planted grass sod to send up new shoots
6
How/When to Remove Dead Weeds and Reseed Lawn?