Why do the leaves of my (very young) Eureka lemon tree look folded?

(Edited to add more detail and an update at the end)

I have a small Eureka lemon tree that is few months old, and is currently showing signs of weakness that are worrying me. In more detail, some time ago it was withering: following this question, I moved it to another pot with drainholes and changed the soil, after which it started making new leaves (while the 3 it had before, probably dead, kept on withering).

But now, for a couple days its new leaves have started pointing downwards, and folding (picture below). This looks quite abnormal to me (isn't it?), and I have started worrying: what is wrong, and what can I do? 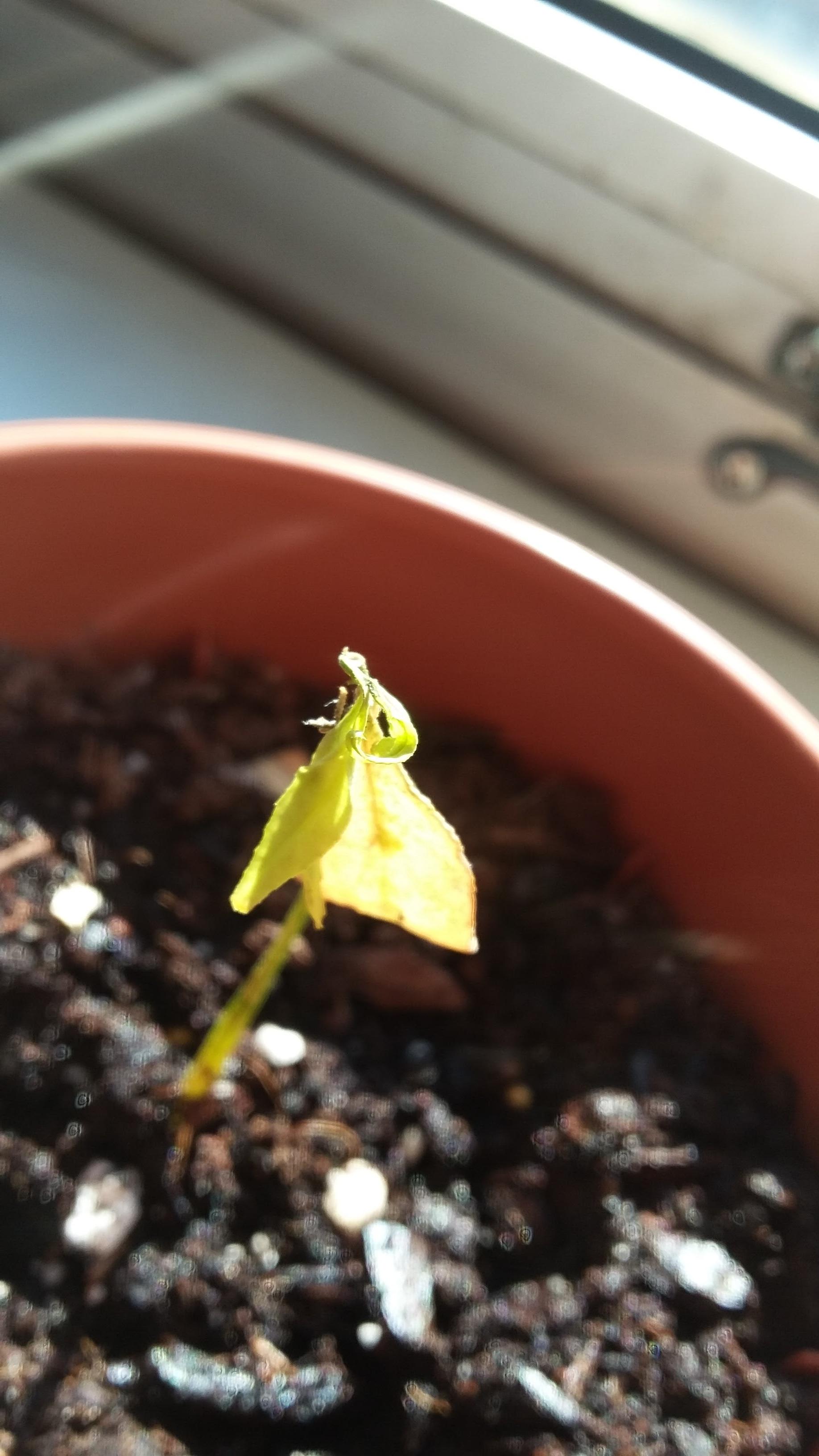 Rk: the big leaf behind is one of the 3 from before it got better, and probably dead. The other ones however are new, and for instance the small one at the top is folded... 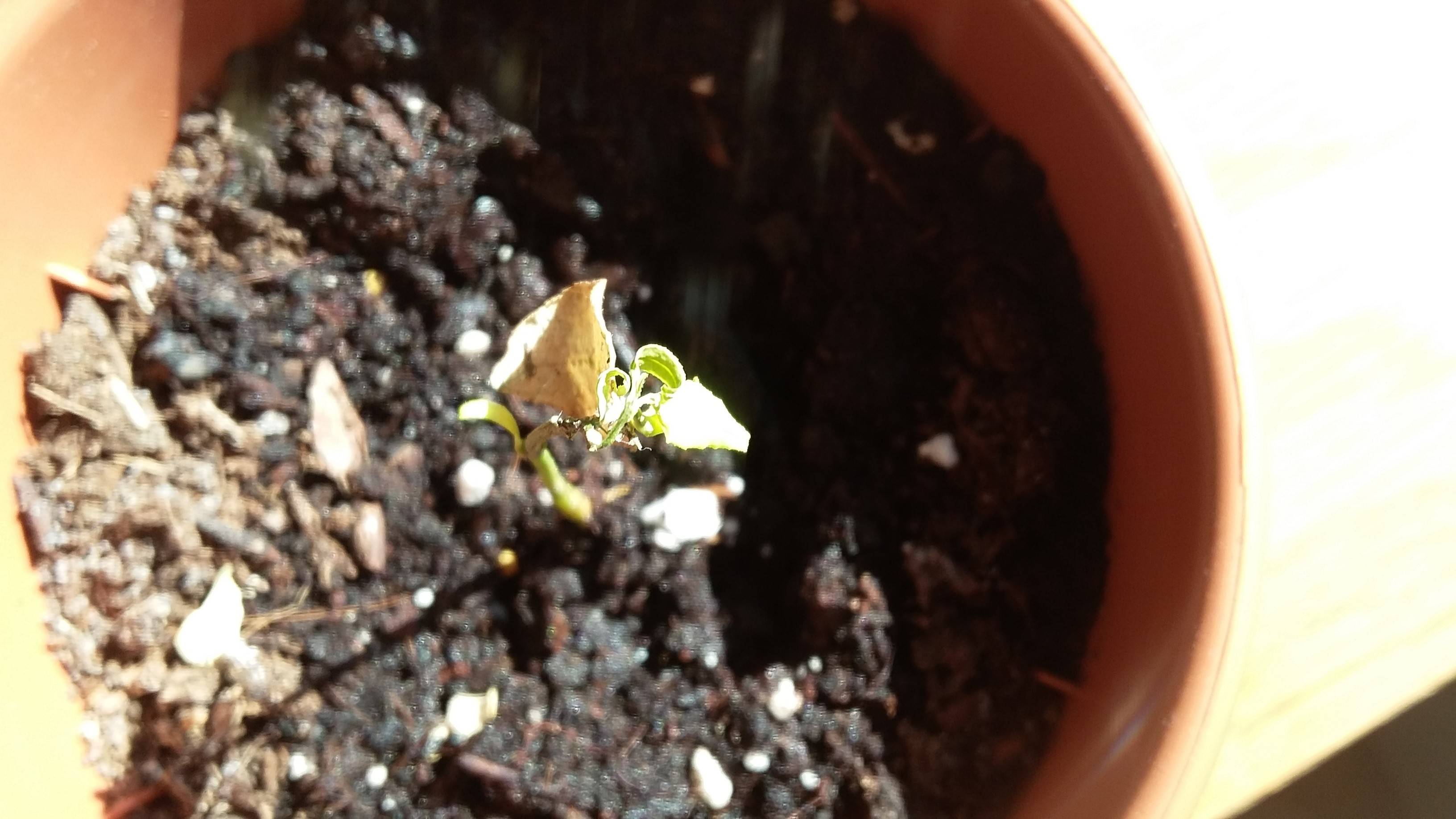 (Too much water? Not enough? Too cold? The pot is inside, next to a window pointed East.)

Edit: after a few days trying to give it more sun (moving it to a South-facing window whenever possible in the afternoon), it does not have improved, far from it: 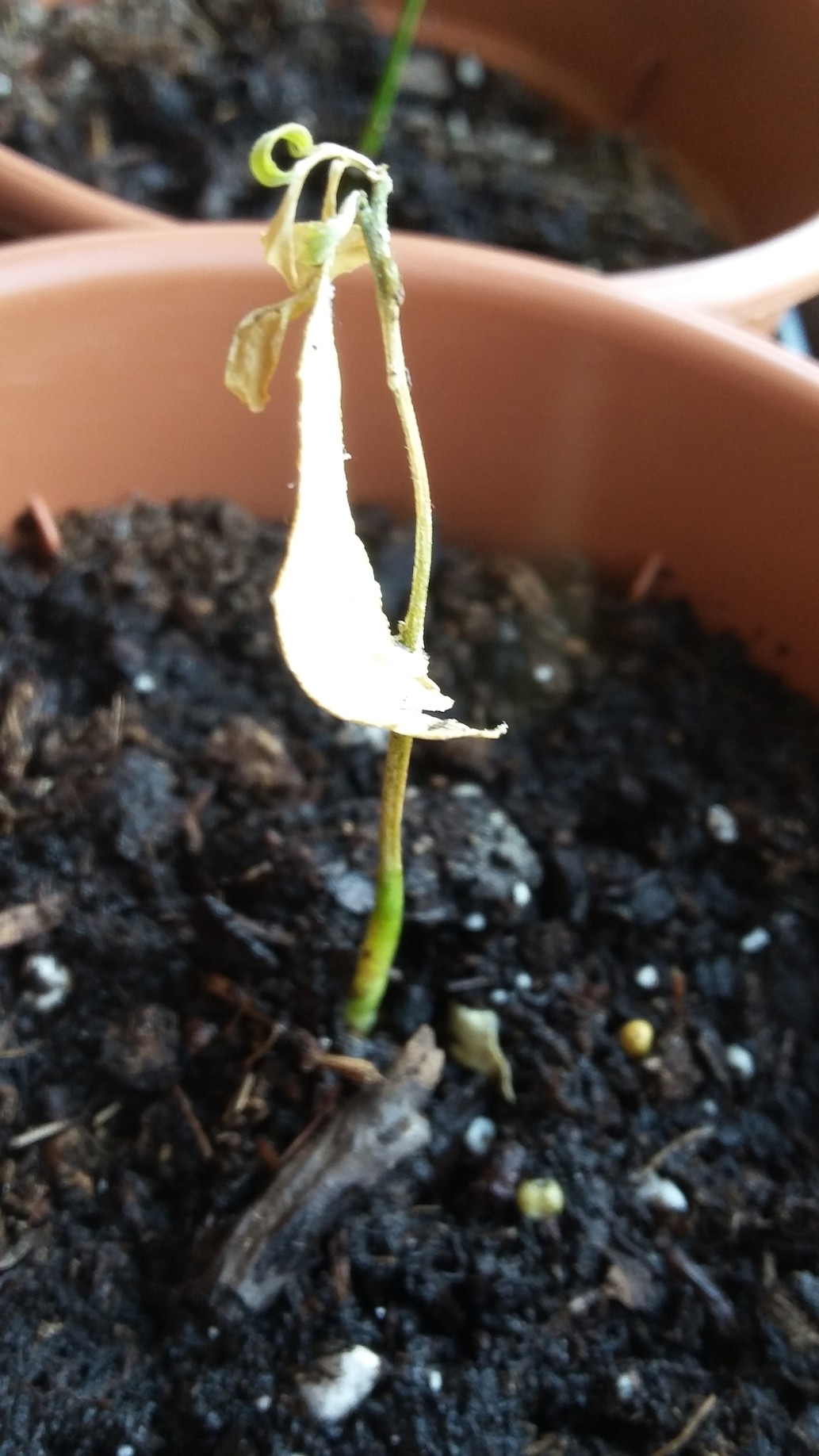 (the picture was taken this morning, just after I watered it)

Also, in case this was not clear: the transplant was 3 weeks/one month ago, not a couple days. Now, not only the leaves, but also the stem is getting brown and dry. I am really at a loss, and am afraid it is dying quite fast.

It is probably suffering in part from transplant shock. Give it some time to adjust.

Also, make sure you are not over-watering. If you stick your finger an inch or so into the soil, it should feel cool & damp, but not soggy. Let the soil dry to this point, but not completely dry & then saturate when watering. Wait until the soil has dried to the point of being only slightly damp again before watering again. For a plant that size in that size of container, this may be only once a week, but you'll need to test it out.

In addition, its light green color (as opposed to a healthy dark green, indicates that it is not getting enough light, try placing it in a south facing window if you can, or under a grow light.

So you repotted after it was failing in a pot with no drainage and it perked up, then began declining again. Possibly it contracted root rot. When you repotted it would have been a good idea to dip the roots in a solution of 2 tablespoons 3% hydrogen peroxide in a quart of water as this would have killed any such infection. But this solution only acts on an existing infection. Possibly root rot is a recent development. You can simply pour this solution into the current planting as a root drench.

Now the issue is that the plant undoubtedly has serious root troubles. Photosynthesis is required to recover the roots from the damage of repotting and/or death by drowning. But you have a situation in which it clearly is desiccating - that is what the loss of turgidity means. Putting it in full sun is exactly the wrong thing to do as it heats the leaves and makes them lose moisture to the air even faster. This is why the stem is now withering. The leaves needed to be in air that was as close to 100% relative humidity as possible!

You should have covered it with a plastic bag or a plastic bottle with the bottom cut out so that you have it in a little terrarium which will have high relative humidity. Then it should be in shade so it doesn't cook. A lot of photosynthesis can occur with just indirect sunlight.

If your tree simply had yellow leaves, inadequate sunlight might have been a possibility, but not with lost turgidity. When root cells die for lack of oxygen they produce a signalling compound that goes into the xylem stream. When it reaches the foliage it is converted into ethylene and causes the foliage to look like it does before it is shed (yellow, but sometimes orange-red in some species).

In other words, yellowing, droopy foliage = roots are dying! #1 stop watering, #2 put it in shade and, if it doesn't quickly recover turgidity, in a humidity tent and/or terrarium.

Now you should find another plant and try again (i.e., get back on the bicycle) because this one is certainly going to be dead if it isn't already. On you next try, don't water until you see the foliage start to droop - it will recover normal turgidity within an hour or two at most. Learn how the soil feels right after you water and just as the plant loses turgidity. Practice until know when to water by the feel and look of the soil.

You will do better with the second plant because you have this unfortunate experience and should now understand what the signals mean and know what to do if you ever see them again.

Plants are fairly simple. They make themselves out of carbon dioxide and water via photosynthesis in the leaves. They get water through their roots. Water is drawn up the plant by evaporation from small pores on the leaves (transpiration). Every living cell in the plant must get oxygen to live (oxygen is a byproduct of photosynthesis).

... not meaning to be overbearing.

Did you see what Escoce commented on your original question here , about transplanting it? Can you remember what the roots looked like when you transplanted it? It's possible there weren't enough roots for a transplant so it might die whatever you do now

If your plant isn't already dead, what you could do is remove it from the soil, and wash it all off the roots. If any of the roots are rotten, cut them off. Then suspend the roots in a hydroponic solution with an air stone to provide oxygen. The oxygen will prevent the roots from rotting further, and you'll plenty of oxygen and water for the roots. You may need to cut the dead stem off as well.

I have not done this to dying plants, but I have taken very small tree branches and germinated roots from them this way in my aquarium. And here you're starting with some roots.

Not the answer you're looking for? Browse other questions tagged diagnosis citrus or ask your own question.

7
Does my very young Eureka lemon tree have leaf disease?

3
Why did the leaves on my Christmas cactus suddenly change texture and colour?
7
Does my very young Eureka lemon tree have leaf disease?
4
Folded leaves on a seemingly healthy lemon sapling
5
Key lime tree: white mush/mold (?) on the roots, and curling whitening leaves
5
Why are the leaves on my peach tree sapling wilting and dropping off?
4
Why did this dracaena marginata die so quickly?
4
Young mango tree leaves get blackish and fall off