Apart from lilac I am looking for a spring blossoming shrub which has flowers in the mauve to purple range, suitable for a temperate climate.

Ideally it would flower earlier than lilac. Are there any?

I'm not sure what you mean by temperate, but I live in Zone 6, (as low as -10F or -23 C), and my favorite spring bush that works well with my lilacs is the Weigela.

They come in a number of colors, including various shades of pink and purple. Mine bloom for a number of weeks beginning in late May, and then again in the fall when the cooler weather returns. The leaves are variegated and pretty, making it a lovely-looking plant even between periods of flowering. If you prefer a "leggy" look, let the many branches shoot out. We like a more rounded, compact look, as you can see by my picture on the left, so we prune and shape it, which is very easy to do.

The flowers and leaves vary among the different cultivars, both in shape and color. They blend nicely with other spring shrubs. This page has a picture of one planted in a bed with a lavender, as Ben Cannon recommended.

Our weigela blooms just a few weeks later than the lilacs, but there are so many varieties, it's worth checking to see if you can find one that blooms earlier.

Below are pictures of one of mine. I wasn't going to post them because they're so blurry, but I thought I'd give you a general idea! Click on them for a larger view. 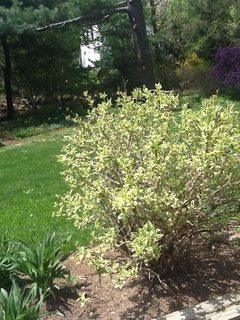 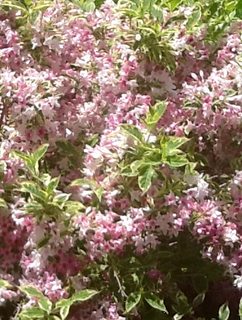 I also have another good option for you. Last fall we bought two young purple/pink azalea bushes. I didn't expect them to bloom until late May or June, with my other rhododendrons, as they belong to the same family. While thinking further about your question, I took a walk outside, and found them all budding, at the exact same time as the nearby lilacs! In fact, according to the Azalea Society of America, a number of varieties bloom as early as March; most in April through June; and some will flower again in the fall.

Lavender, rosemary, salvias, or indeed almost anything in the mint family. Most varieties are somewhere in that colour range. As well as spring, they'll also bloom at other times in the year.

Fushias are a personal favourite, although they are only half purple.

The ones I can think of are:

Not the answer you're looking for? Browse other questions tagged plant-recommendations shrubs or ask your own question.

8
Looking for plant recommendations for newly landscaped front yard
4
Does an Eastern Redbud tolerate partial shade?
4
Red, white and blue varieties for a medium pot in full sun
3
What could be keeping Crepe Myrtles from flowering?
4
Greenhouse in a tropical climate
2
What potted outdoor plant most resembles astroturf in terms of required care
4
What flowering plants could I keep outdoors in pots in winter in Holland?
2
Unknown tree/shrub with star shaped seedpods, white flowers
4
What is this tree or large shrub with pink flowers like snapdragons?