Cactus with a growth

We have this cactus that I believe was supposed to be red at the top but is just dried and shrivelled but the stranger thing is the weird extra cactus growing out the top. Any ideas what it is, I don't suppose it can be replanted? 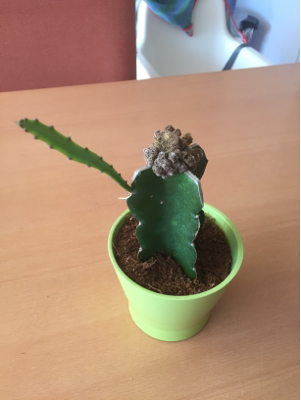 When you first got this cactus, with its red ball like growth on top, it would have been named Gymnocalycium mihanovichii friedrichii (common name Hibotan or Red Cap cactus), but really, that name only refers to the upper, red part, which will have been grafted onto a plain green cactus because the red cactus lacks chlorophyll. What's happened with yours is, the graft has failed, so the upper red cactus has died, leaving the green cactus to grow on its own. The red part will never recur, and the green cactus is now producing secondary growth of its own.

The part that's left can very much be grown by itself. It's a Hylocereus, possibly H. undatus. It's jungle cactus that normally grows sprawled over trees and bushes and gets very long. It generally wants to sprawl, so it won't grow straight up for long.

This is one of the "dragon fruit" plants and will make beautiful, large white flowers. I'm not sure if they are self-fertile or if you need two to make fruit.

You can pot it in a larger pot with cactus soil, a hanging pot would probably be a good idea. As the plant gets longer, you can snip parts off and stick them in the soil to make more plants and keep it shorter, unless you have the space to let it roam.

As a jungle cactus it is VERY frost tender, short periods of low temps (below 32F) or frost will kill them dead.

I personally find the Hylocereus more interesting than the mutant Gymnocalycium (the part that died). I've killed a few, where I live it's too hot and too cold (Phoenix, AZ).

Not the answer you're looking for? Browse other questions tagged identification cactus or ask your own question.

3
Cactus with a white "growth"