What's the best way to take care of my potted orchid?

I have a phalaenopsis orchid at home. I have not done much to it in terms of taking care other than watering it. The base looks healthy but the top stem has dried up. What care do I need to take to get it healthy and flowering? 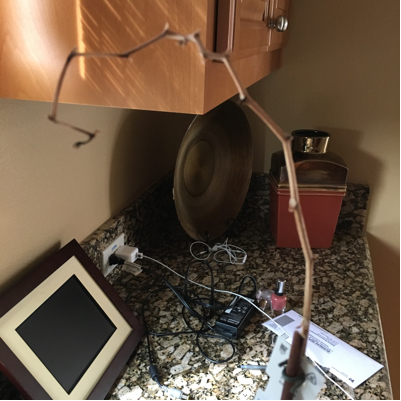 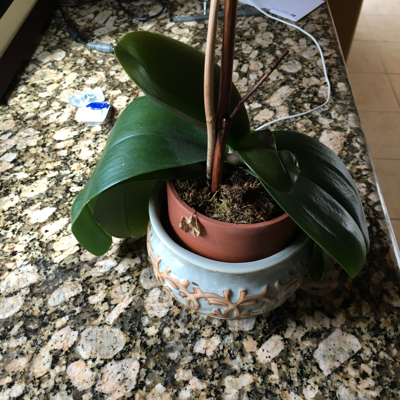 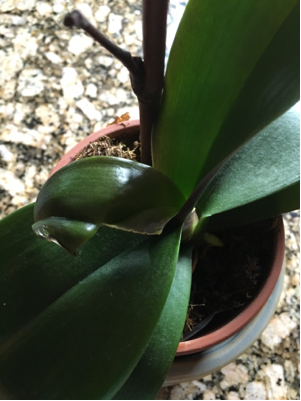 Alright, so the first thing I'd suggest is looking up a channel on youtube.com called 'Brad's Greenhouse'. It's a dude in Canada that has a ton of great videos, including a pretty extensive one on these store bought phals. I'll try to give an overview here. I'll be honest in saying that while my phals are healthy, mine haven't re-bloomed. I also haven't really put the effort into it, though.

Typically, people see one of these phals(Phalaenopsis or moth orchids), in a grocery store or home improvement store, in bloom, and pick them up. The important thing to know here is that the vast majority of these are not potted with the intention of giving the orchid proper care, but instead, causing them to retain their blooms for the longest period of time after leaving the nursery as possible. Most people aren't going to buy an orchid that isn't pretty and full of flowers.

To that end, they tend to stuff them with straight sphagnum moss and soak them. Sphagnum moss retains a lot of moisture for a long time. In the long run, keeping the roots soaked like this will rot them. In the interim, it'll keep the plant hydrated and prevent the flowers from falling off when the store employees forget to water them. Lots of times, you'll even find when you unpot it, that there is a small, cheapo orchid pot, stuffed with sphagnum and the rest of the pot is a mix of old plastic pots, dirt, or some other filler and they top dress it with sphag or orchid bark to make it look good.

Most, but not all, orchids are epiphytes. This means that in nature they grow on or in the branches of trees. Down here in the southeast, the most common examples I can think of are Spanish Moss that you see hanging from the trees. Lichen might be an epiphyte as well, I'm not sure. The point is that in the wild, they're adapted to clinging to trees. This gets them above the other plants and gives them an advantage. What this means for you is they like plenty of air around their roots, they like their water in bursts from rain showers and dew, and they aren't going to like things that are nutrient heavy, instead getting their nutrients a little at a time from rain, leaves, etc... This will be mimicked by you with a basic orchid fertilizer (urea free).

In the interest of this, you'll want to repot your orchid. You should be able to easily find an orchid pot, such as: (If the link breaks, it's just a ceramic pot with holes and a built in tray.) 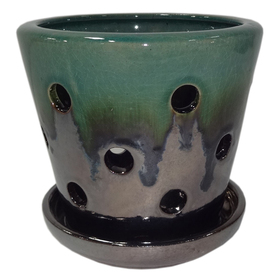 Or if you can't find one of those, just use a drill, soldering iron, or hot nail to put lots of holes in the side of a pot. People like the clear, because it's cool to see the roots. I think they are also supposed to photosynthesis to a lesser extent. You can buy these pots premade from amazon and other place or go to your local grocery store and see if they have any clear containers that food had come in. If your orchid is light weight you can set it inside a heavier decorative pots as long as there is an air gap around the pot. This method also helps the potting mix stay moister longer.

As for what to pot it in, there are lots of possibilities. You can leave it in pure sphagnum, but there is a greater chance of root rot. They also have these little clay pebbles that are suppose to be good. I forget what they're called. They use them for hydroponics systems as well. There is also a mix that's usually called 'orchid bark' you can find at most garden stores. It'll have fir bark, perlite, maybe some coco coir. Personally, I prefer a mix of the orchid bark and sphagnum moss. I'll vary the amount of sphagnum moss depending on the plant.

For instance, I have a Miltassia Shelob "The Weed". 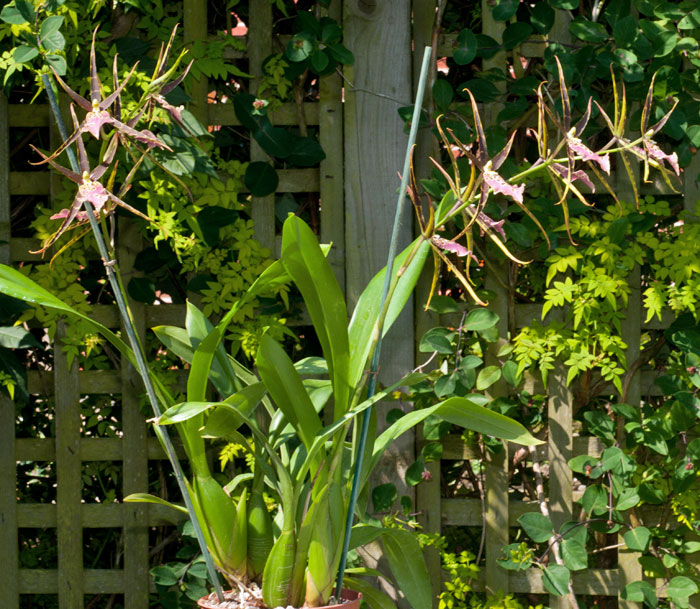 I had originally potted it in straight bark, because it has bulbs to retain water, but they wrinkle when I just water it once a week. When I repotted, I added some sphag moss to help retain water between watering and now it's good to go with once a week watering. If you have a climate where you can put yours outside, you'll loose water faster and maybe need more sphag. For a Phal, I'd probably do 50/50:bark/sphag or maybe 50/40. They don't have a good way to store water.

You'll notice the thick green roots on your phal. I can see one peeking out on the bottom picture. These aren't actually the roots, but a spongy coating over them. When it rains or you water it, they absorb the water and turn green. As the roots that are on the inside absorb the water or it evaporates out of them, they start turning silver. You don't want them wrinkling and turning whitish, but it's okay if they get a little greenish silver between waterings. A note here is that the roots become adapted to the media they're in, so if you repot, make sure any roots that were under the media stay under the new media and any hanging in the air (air roots) stay in the air. Otherwise, they'll slowly die. If you can't help it, don't worry about it.

You should also give your orchid an orchid fertilizer. Mix it per the directions and give it to your orchid every two weeks while it's actively growing and once a months when it's not. Once every month, you should flush the pot of excess minerals by running clean water through it. When fertilizing, always pre-water your orchids, if you don't then they'll absorb too many nutrients and can be harmed. Water with straight water first, then fertilize.

As for blooming, I know that phals are supposed to spike from under the third leaf down. So if you count from the top leaf, down three leaves, the spike should come from underneath that leaf. When the flowers start you can switch to a fertilizer meant to help with flowers, but you don't have to. Also, when they all eventually die, you can cut the stem back to a node and it may respike off of it. The nodes are the little fat parts of the flower spike. There is actually a little leaf like think covering each node and you can gently peel it off, being careful not to damage the growing tip under it to encourage it. You may get nothing, you may get another spike that will produce more flowers, or you could even get a keiki. A keiki is a baby orchid. You'd let it grow leaves and roots, then cut if off and pot it. They sell keiki paste to help encourage it to do this.

Getting out of what I'm familiar with, I believe that phals need a period of lower light or cooler temps to help encourage spiking. Someone besides me will have to comment on that. I do know that phals are good with lower light anyway. They don't like really bright light and will burn in straight sunlight.

I think I've covered most everything you need to care for this orchid. I'd go ahead and cut the dead spike off, unless you would like to use it to stabilize the orchid in the new pot till it grows more roots, but you don't really need to. Good luck. 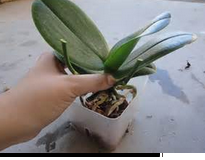 Be patient with nature

But It could take time before you get new flowers on it.

Not the answer you're looking for? Browse other questions tagged indoors plant-care fertilizer flowering orchids or ask your own question.

16
My orchid has one yellowing leaf. What's gone wrong?
10
Why is my phalaenopsis' keiki (orchid) not thriving?
3
How Should I Take Care of These Two Phalaenopsis Orchids with Different Behaviors?
3
What's Wrong with this Orchid?
2
How should I take care of my new Areca Palm?
4
Does this orchid have a viable stem? If not, will it grow one if transplanted to a larger pot?
5
What lawn care steps should I take?
4
Why aren't roots growing from my Orchid that's growing from a stem?
4
Taking Care of my Orchid
1
Is my orchid diseased?