Bonsai pot broke due to accident

I am a bonsai beginner and a friend gifted me a ficus bonsai. A stray cat got into the house and jumped on the table where I had kept my bonsai pot, tipping the table and breaking the pot. I wasn't around at home when this happened and my dad did the best he could and carefully transferred the bonsai into the nearest pot. This is the pot: 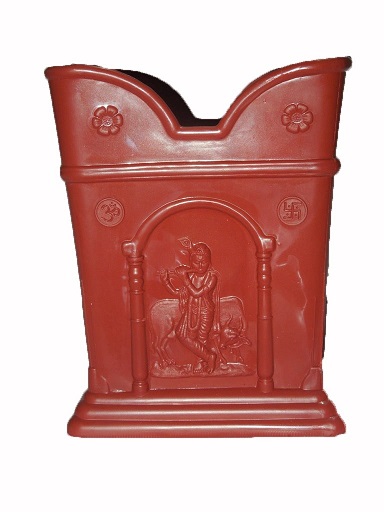 As the pot is deep, my bonsai has started growing more new leaves.

Am afraid to transfer it again as I feel it will hurt the bonsai but the friend who gave me the bonsai said now that the pot is deeper, it has started growing and that's not good.

Whats the best thing to do now?

From what I understand, ficus is a pretty hardy tree. The way a bonsai works is that people either collect a bonsai from the wild, grow one, find a nursery plant that will work (either a random nursery or specialty bonsai nursery), or you purchase/receive an already started bonsai.

They are put into bigger containers or even the ground to encourage growth, just like a regular plant. The idea is to encourage lots of growth so you can begin to work it into it's bonsai shape. They focus on thickening the trunk and growing lots of limbs to choose from.

Once they have material they can work with, the move it either into a bonsai pot or a training pot. Basically, that mean completely rinsing the dirt off the roots and transferring it to a bonsai media. Typically, bonsai media contains very little organic matter. You simply water more frequently and provide fertilizer for the nutrients. The pots they go into are also smaller, often necessitating the trimming of the roots.

A tree grown this way can be perfectly healthy, but two things are going on here. One is that it really slows down the growth. If you think about how much growth some plants can put on, you'll see your bonsai can quickly get out of hand. You actually don't want it to change very much throughout the year. Granted it will always change, but you don't want it to change very much and you want to keep up with that change through wiring, pruning, pinching, etc...

The second thing it does is provide balance and perspective. You can take the same bonsai tree and put it in different pots, different ways and completely change how it looks. For instance, putting the tree off center looks better than putting it in the middle in most, but not all cases. If you had a tree that leans way out and the branches come back over the pot, it might look better in the center. So you have to pick a pot that complements what you're doing with the tree. If it was in a wide shallow pot, you want to put it back into a wide shallow pot, unless you're changing the style.

The pot you pictured is typically used for some variation of the cascade style. This simulates a tree hanging off a cliff and tree actually grows down past the edge and sometimes even below the bottom of the pot before there is growth. You can look this style up on the internet.

So if you're friend is saying it isn't right, then they're probably referring to your decision of pots changing the style of the bonsai. That would be up to you whether you want to do that or not. With the ficus being a more tropical plant, I'd assume that you could repot it anytime without hurting it as long as you haven't stressed it recently. Also, if it's putting on that much growth, even in a new and deeper pot, it kind of makes me suspect it isn't in bonsai soil. I see a lot of plants at Walmart and places like that where they label a tree as bonsai, because they hacked off some of the limbs, put it in an bonsai looking pot and glued some rocks to the top. It would be helpful to other answering if you included a picture to show the style of bonsai it is, how it's potted, and in what media. Good luck.

Your Bonsai will grow bigger if it roots deeper and that appears to be happening. The good news is the Bonsai survived the cat! Bonsai will need pruning of roots at some point, so transferring is not as bad as you think.

You can do this carefully, and transfer the Bonsai back to a smaller pot. You might want to prune both the roots and the shoots.

Great pot! Deep pots can be used for cascade (Kengai) or semi-cascade (Han-kengai) style bonsai. Ficus can be styled as cascade or semi-cascade bonsai, see here for examples on google.

Not the answer you're looking for? Browse other questions tagged containers bonsai or ask your own question.

4
Chinese Elm bonsai turning yellow after repotting
6
Bonsai losing leaves
10
Giant Sequoia Bonsai
5
keep bonsai leaves small
6
Growing bonsai using artificial lighting
6
'Dead' Bonsai Help
3
Bonsai Ficus problem
2
When should I plant my tree saplings into a bonsai pot?
4
Is there way to encourage a jade plant to grow new branches from the woody trunk?
2
Is it a problem if I pot multiple Bonsai at the same pot?