How should I care for a young cherry tree?

We recently had a cherry tree planted in our garden. I don't know the age of the plant nor the exact species but it's currently below 2m (6 ft) tall, including the branches, with a thin trunk.

There are 6 branches with plenty of buds. These just started opening although I can see other cherry trees were full of flowers already at the end of February.

What care does my tree need? Is it growing normally?

UPDATE: The tree was planted early February by the estate builder. They didn't mention what kind of three it is (just "A cherry, the one with pink flowers") nor the age. They didn't put any compost, just dug a hole and put the tree inside.

UPDATE 2: There are a few flowers now on the tree and more are coming out but they are white, not pink. Wonder what they've planted in my garden... 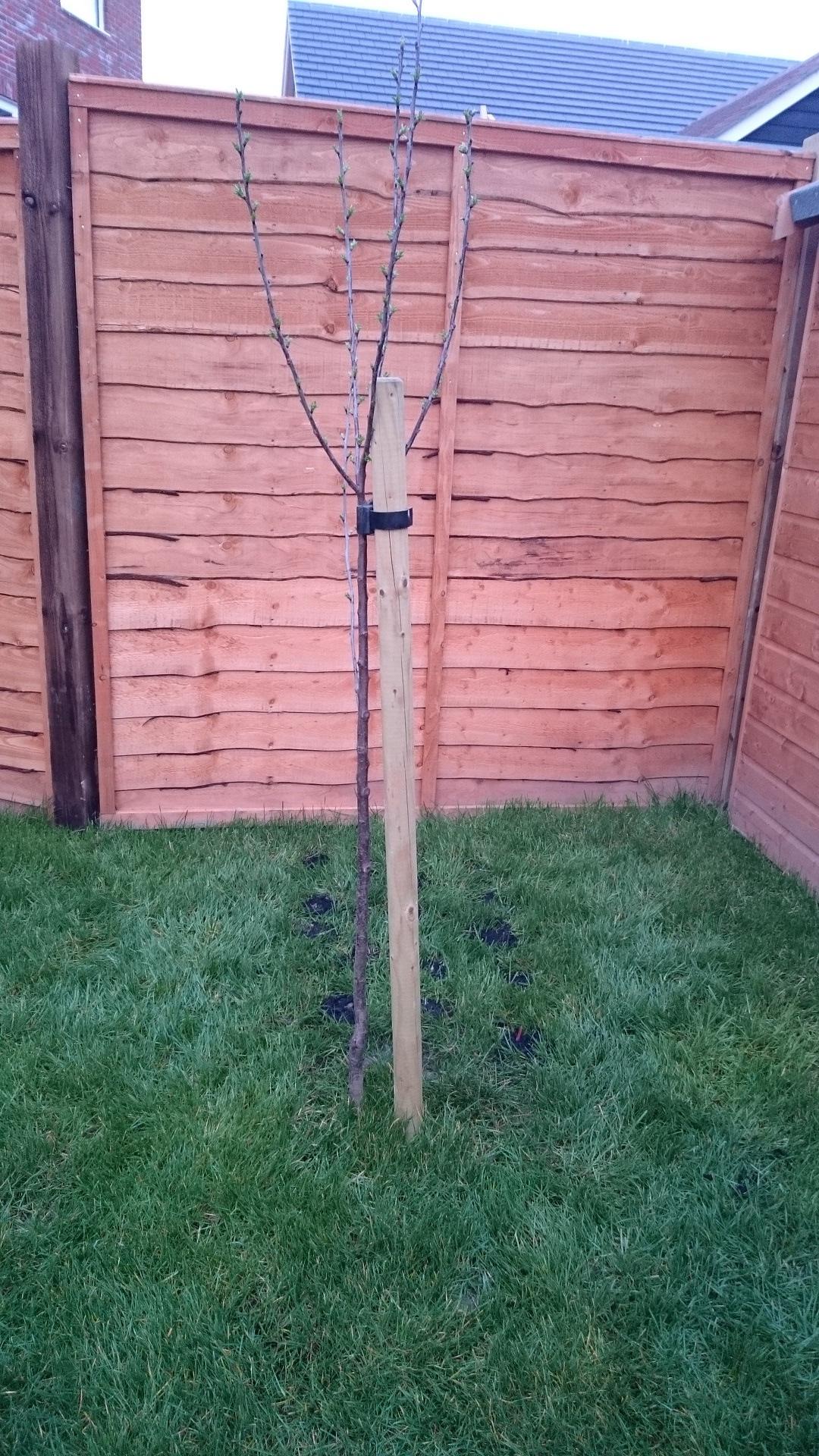 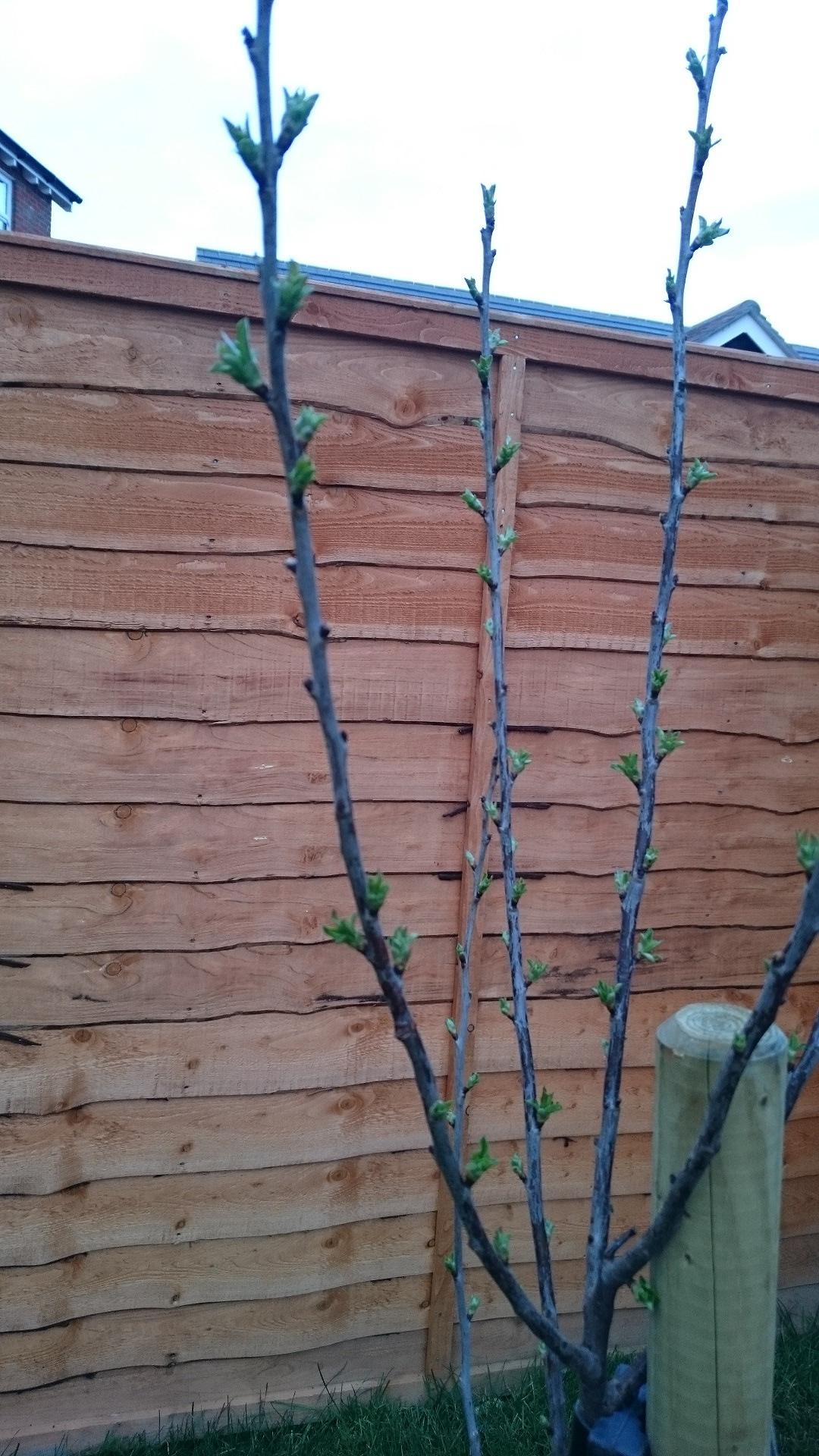 When you say 'recent', if that means within the last year, the only thing you need to do is keep it well watered during dry spells for its first 2-3 years. Hopefully you dug the soil over well and added organic composted materials prior to planting - if you didn't, you could mulch round the bottom of the tree with something like composted animal manure this month, but don't let it sit against the trunk. I've seen what part of the world you're in (same place as me) and currently, we've had plenty of rain, but if, as temperatures rise, we get a dry week or two, you'll need to ensure it gets a good few gallons twice a week, specially if its very hot in, say, June, July or August.

Regarding why yours is only starting to grow now, you haven't said whether yours is an ornamental cherry or fruiting cherry, but either way, different varieties flower or start into growth at different times, depending on local climate as much as anything else. The time to worry is if it doesn't leaf out or produce flowers at all...

UPDATED ANSWER - You've said you didn't plant it, the builders did, and they just said it was a pink flowering cherry. Likely its ornamental then, and as you haven't described it as 'like a flagpole' it isn't Prunus amanogawa, and you haven't said its weeping, then its one of the more upright versions, but it could be one of many varieties even so. It won't need pruning, and as they didn't emend the soil, I would definitely get a bag of composted animal manure from the garden centre and spread it around the base of the tree, with a handful or two of Growmore granules spread underneath it - assuming there's no lawn there (which there shouldn't be, with a new tree, to answer your query I've only just noticed - 2-3 feet all round bare of any growth, though not so critical after the first 2 or 3 years as its not grown for its fruit). If its set in paving, hopefully there's some visible soil around it.

It's hard to say from the pics whether its Prunus amanogawa or not - I suspect not, but you'll know as it grows on. Be good if it was, because if it isn't, its too close to the fence...if it develops a wide spread crown, it'll be touching or crushed up against the fences, until the main trunk gets taller. It's obviously not going to flower this year - but should do so next year, otherwise looks healthy.

Not the answer you're looking for? Browse other questions tagged fruit-trees tree-care cherries or ask your own question.

6
Are my cherries edible?

18
What should I do with my Cherry trees?
7
Cherry tree pruning problems
4
Why does my cherry tree have no branches?
3
Why are the cherries dropping off my cherry tree?
6
Are my cherries edible?
1
Weird black egg-like things on cherry fruit tree leaves
2
Cherry tree ends of branches dying
0
Best way to trim this cherry tree?