I planted some fava beans a few months back as cover crop in my vegetable raised bed. They grew very well and as suggested my members of this group, I cut the top part and left the roots inside to provide nitrogen. I am wondering what to do with the top part. I think the recommendation is to bury that I the soil and it provides additional nutrients. Do I have to bury those ASAP or after it dries up? Also, how deep do I bury it and can I bury it next to the roots itself(between the rows I planted)? 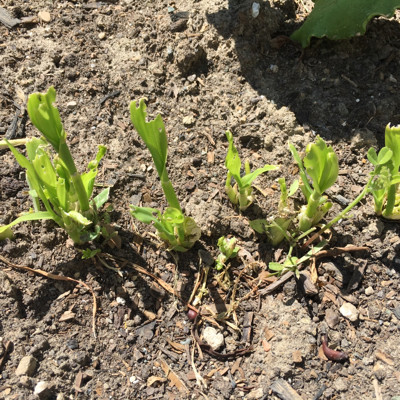 Fava beans are a favored fall cover crop because they enrich the soil, protect against nutrient loss, feed the rhizobacteria, and produce a high protein food.

It's usually sewed straight after your summer crop so that you get a month or so of growth and nitrogen fixation before the cold weather sets in slowing growth down.

It should be cut to the ground two weeks before you do your spring planting. The roots can be left to decompose and release their nitrogen. If you leave your planting too late, you'll lose some of the nitrogen released by the decomposing roots. But you should leave any greenery to dessicate so that green bugs don't get a chance to cross over to the next crop.

Typically green manures are either dug into the ground or left as a mulch. Fava beans are rather woody so may take a longer time to decompose and release their nutrients. You may be better off adding your compost to the first few cm of soil and use the cut fava bean growth for your compost heap as it provides a good source of structural carbon. I believe the biointensive method is to use it for creating compost.

Firstly, you should dig the bed over to break up the beans' nodules and release nutrients evenly throughout the bed.

You don't even have to bury the top growth: you can lay it on the bed as a mulch. Doing this it'll make no difference whether or not it has dried out, although damp foliage is heavier thus less likely to blow away. Mulching will feed the soil for the next growing season whilst preventing weeds colonising the bed and converting the nutrients.

Otherwise, you should dig them into the top 10 inches of soil. Leave the bed for a couple of weeks before replanting, since the breaking down foliage will affect new growth.

Unfortunately, according to the RHS ( https://www.rhs.org.uk/advice/profile?pid=373 ), only fix nitrogen into the soil during the summer. Unless you're bean plants were about to flower you might not be turning much into the soil.

Not the answer you're looking for? Browse other questions tagged vegetables compost raised-beds cover-crop fava-beans or ask your own question.

8
Do rye or oats make a better winter cover for a poor soil vegetable garden?
5
Nutritional value of home-compostable plastic?
6
Does it make sense to plant a cover crop in raised beds?
10
Managing Cover Crops
1
Perennial cover crops in vineyard
3
What do I do with cover crops before planting vegetables in a raised bed?
1
What should I cover the ground in my garden with?
1
Cover crop - cutting rye before it flowers
1
Raised Bed Cover Crops - Zone 6
2
How far away from tomatoes can I plant blackberries?