I am planning on doing my own backyard to save a bunch of money on labor. The first step will be digging the trenches for my sprinkler system.

Before I begin, i was hoping to get any thoughts or opinions on how I have the sprinklers / drippers laid out which would change up my trenches.

In the image below, P=Plant, S=Sprinkler, green lines are the two proposed trenches. One zone will feed all the plants/flowerbed and veg bed. The other will be for the grass. 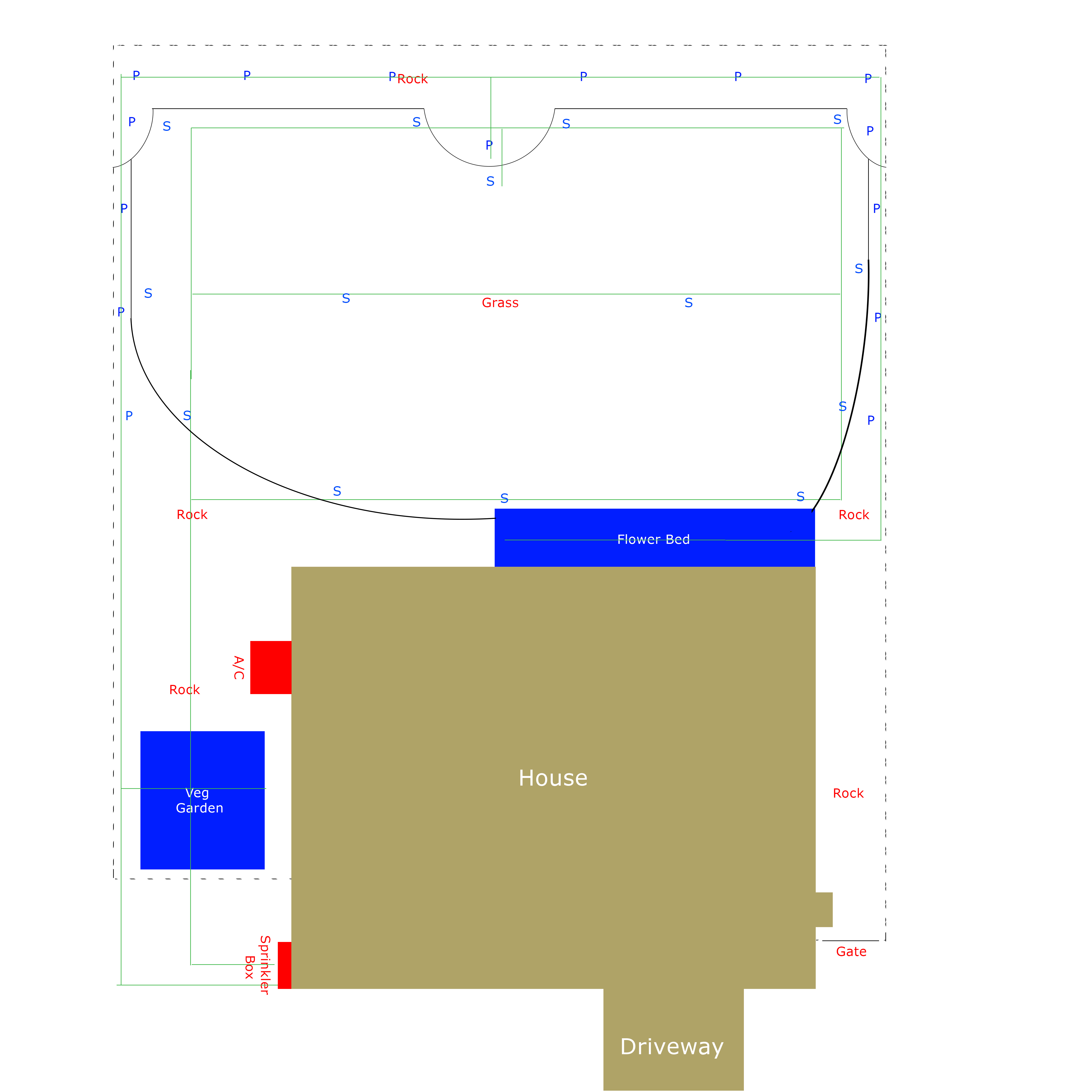 @SBB I'm probably too late to be helpful but thought I'd answer with some pointer.

First, a small helpful hint for your drawing, which by the way is very good. Where pipe from one zone crosses pipe from another zone it's helpful to make a U on one zone, and erase the other zone's line in the center of the U.

Another design hint I'd offer is that you might consider a third zone for the vegetables as they will likely require water at a different time/rate. This would have the added benefit of allowing you to use a different type of drip for the plants and vegetables if you so choose.

My last two suggestions are both based on pressure. The drip tupe is probably ok on that length of run as long as it's at least 1/2", the topography is relatively flat, and you have decent working pressure (which I'm guessing you must because of the number to spray heads in the turf. If you have low working pressure, you might consider stubbing the flower bed and the plants on the right, off earlier rather than wrap it all the way around. An E rather than a U. If you have much elevation change it might be good to do this same concept to break up how / where the water is released. Another option would be to install swing valves or check valves depending on which direction you are trying to control the flow of water from traveling when the system gets turned off.

As for the lawn, you seem to using what is called a looped system. While this is in no way bad, it might be overkill for what you are doing unless pressure drop is a major factor. If it is, simply keeping the pipe size larger but doing the correct calculations rather than just guessing would be the way to go. From you're detailed drawing you don't look like the type of person who would just guess on pipe sizing.

If you don't need a looped system, I would eliminate something on the right side that would eliminate the most amount of digging. If you do this, it's important to consider both your velocity and pressure loss over distance.

One last hint, when you dig your trenches, if you're landscape is already installed it's helpful to lay plastic down under the dirt. If you're careful on your cleanup it's almost impossible to see where there trenches were dug.

Not the answer you're looking for? Browse other questions tagged grass sprinkler-system irrigation drip-system or ask your own question.