What sort of tomato has two layers of seeds?

I asked a question about this plant earlier. It appears to be either indeterminate or semi-determinate as I've already harvested three tomatoes (on August 31) and the plant is flowering again. I live in Southern California, so frost probably won't be an issue. I hope I get another two or three fruit this year.

In reference to Peter Turner's answer, the seeds didn't look like the Husky Hybrid seeds in the picture, though I don't know exactly what distinguishing features I ought to be looking for. Fortunately, my wife took pictures of the fruit: 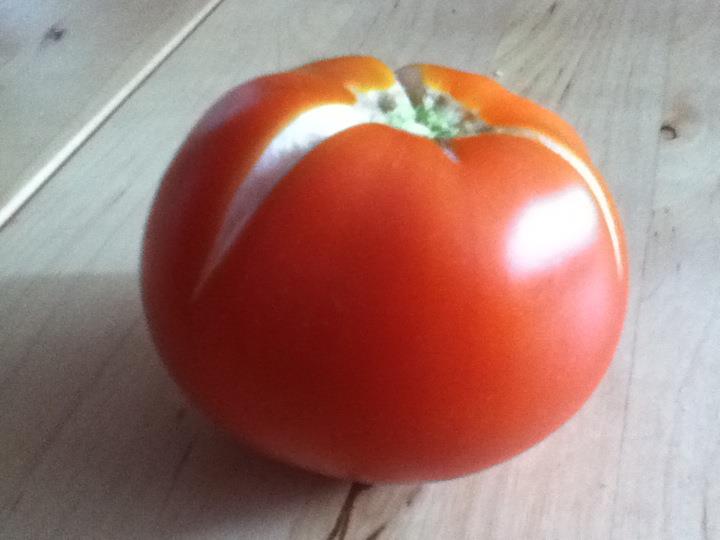 The scale is hard to gauge from this shot, but the fruit are a touch smaller than a billiard ball. I'm not really sure what caused the cracks in the skin, but only two of the fruit had them. More intriguing to me is the cross-section: 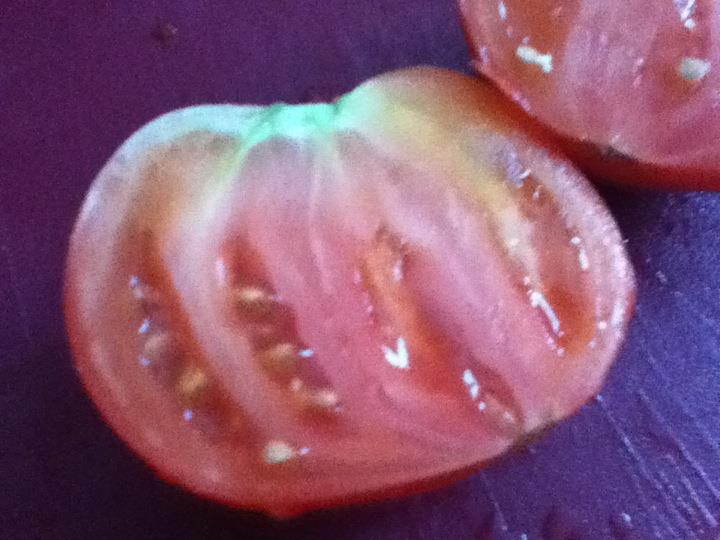 As you can see (blurrily), the tomato had two layers of seeds separated by a layer of flesh. I believe all three tomatoes had double-layers of seeds.

I'm not a tomato fan, but the taste I tried was especially sweet and didn't have as much of the "tomato taste" that I dislike in commercial tomatoes.

I keep forgetting to take a photo of the plant itself and I don't really know what to say about the appearance except that it's a tomato plant. Is this enough to go by?

When I saw the pictures here I wondered if it was a form of siamese twinning where one is basically growing inside the other. As with human siamese twins the most common ones we think of are those joined at the hip, but the less obvious ones are just a bit of alien tooth or heart cells within one child.

A genetically distinct plant which has experienced a mutation from regular tomatoes, which massively increases the likelihood of siamese twinning in the fruit could display this kind of arrangement.

Now that may sound bizarre. I certainly thought so myself, so I tested the theory by consulting Lord Google... and it does appear that it's not too uncommon according to this post on Accidental Green Thumb. See also this post by Herbgardener.

If the siamese twin theory seems too far fetched it's still possible it's some other mutation. And since you say the fruit is delicious and it's still clearly attractive, you could cultivate this one over many generations and make a packet by mass marketing it!

Not the answer you're looking for? Browse other questions tagged identification tomatoes or ask your own question.

12
Is there any way to tell if a tomato is determinate or indeterminate before it starts to bear fruit?

16
What does it mean if my tomato leaves are curling?
5
Advice for late tomato/pepper starts
18
Do seeds from fresh tomatoes need to completely dry before they will sprout?
9
"Volunteer" tomato plant in my vegetable garden - good, bad, indifferent?
4
What happens to my tomatos?
4
Why is there such a difference in size between the same tomato plant's saplings?
7
Unknown plant whose leaves look like big versions of tomato sapling leaves
11
Plant recommendation for gift for kindergarten students
5
What is this whitish feather on my Echinacea seedlings?
3
Why is my Meyer Lemon producing orange fruit?