Why did my pansies die?

I had some pansies and similar flowers in a horse trough outside on a balcony in San Francisco. They were doing well, and had done for around six months. Then it got very windy, and also very rainy, and my flowers shortly died (see photo).

Is it more likely that it was the wind, or the rain? What could I do to help in the future? 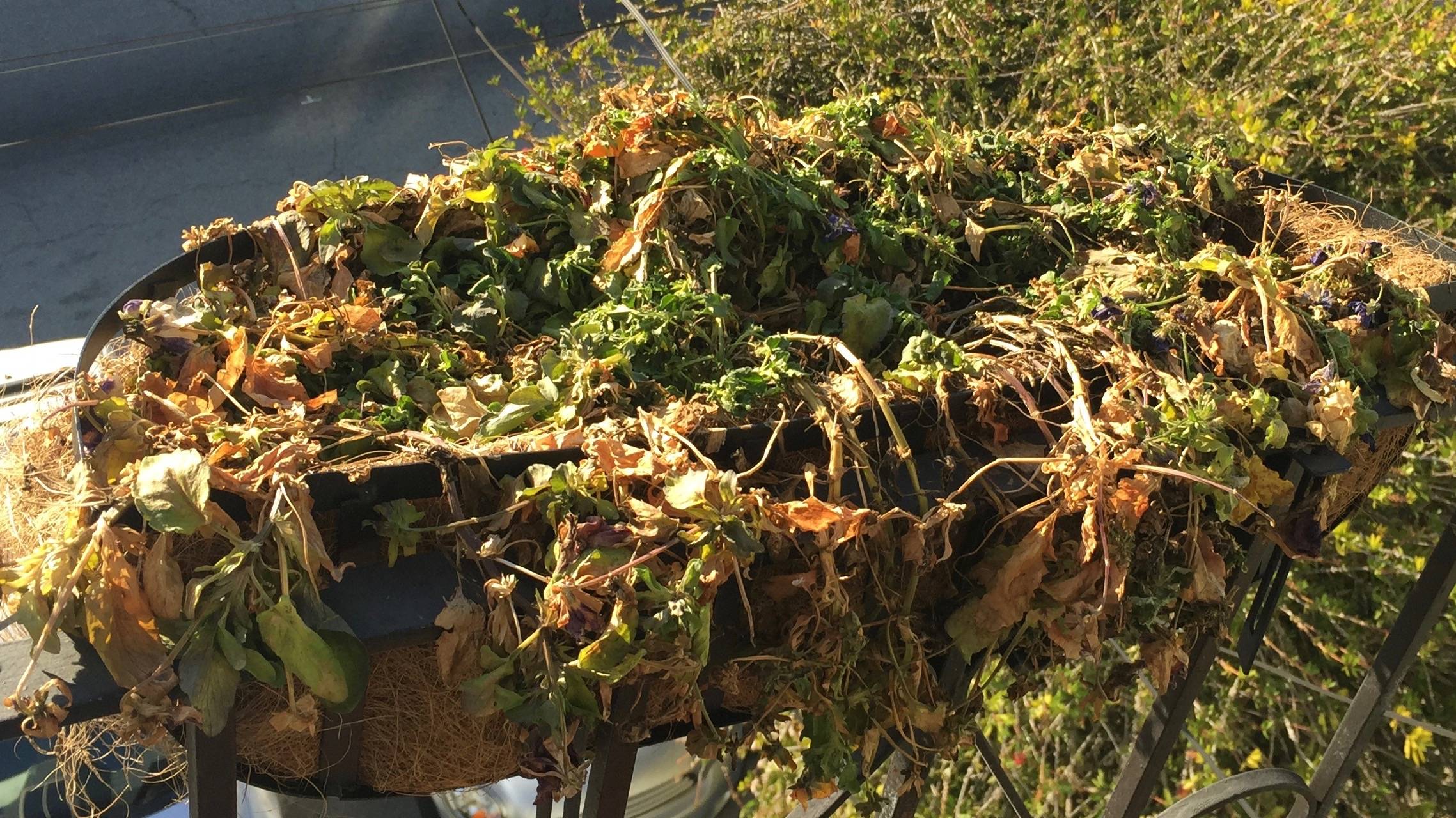 I have a lot of experience with pansies because they grow well here in Massachusetts, Zone 6. I like that they're among the first plants hardy enough to be outside in the spring, sometimes as early as April. When tended to properly, which involves only a few minor things, they'll bloom into the fall, sometimes until the first frost. They grow easily from seeds too, if you're a person who likes to do some of your own germinating.

You mentioned wind and rain, but I'd like to know if this happened during your hottest months. Pansies are not fans of high heat and humidity, especially if they're in direct sun, and that could easily be part of the problem. If I don't move my pansies out of the direct sun during July and August, they'll lie down, become limp, and stop producing flowers. Once the temperatures get back down below 80° f, they perk back up.

Correct me if I'm wrong, but it looks like you may have them planted in a coco fiber liner. These tend to drain well, sometimes to the point where plants dry out and need more frequent watering. If that's the case, I'd be even more encouraged that, although the weight of the rain may have done this, drainage has likely been sufficient enough to prevent full root rot.

I'm with Bamboo here; there are enough green leaves to make me think at least some are salvageable. It's definitely worth investigating before throwing them out. I too would cut them all back to within an inch or two of the top of your soil. It's not just that the weight is causing them to droop, but any energy left in the roots is being sapped in an effort to help the plant grow. Cutting them back is your best chance to give the roots time to concentrate on absorbing the nutrients from the soil and, essentially, to start from scratch. Then dig down a little and see if you have any viable roots. I suspect you'll see some life under there, especially on the plants with the most green leaves. If so, gently pull apart what you can, and choose which to save. Replace your soil with something fresh and dry, or move them to a different container.

Trimming is important even at their healthiest. Once they've grown to a point where the stem is spindly and hanging over, pinch it back to where the next bud or bloom is. It not only keeps the plant healthier, but it also makes a fuller and prettier shape.

I also agree that they're overcrowded. This happens to me all the time. I want the container to look full, so I put too many plants in, only to find that, four or five weeks later, the roots are fighting for space and flowering slows down.

Much of what I've already discussed is useful for the future. To sum it up:

I hope you can save some of those plants, and that you have continued success in the future!

They don't look completely dead, just completely battered and flattened. If you had torrential rain and high winds, I'd expect this to be the result, given they were obviously at least six months old, which is quite mature for a pansy. It's hard to see how many plants were present in the trough, and it may be they were overcrowded as they grew anyway, but I'd certainly try cutting them right back (provided the weather's not too cold) to see if they regrow.

A close up pic, though, might reveal some level of Pansy Downy Mildew infection, its impossible to tell currently.

Most likely the rain, they may have been saturated and consequently drowned. Sorry for your loss.

Not the answer you're looking for? Browse other questions tagged flowers plant-health or ask your own question.

11
Why did the stem suddenly weaken in my oriental poppy?
13
Why did my tulips die?
4
What variety of clematis is this?
4
Redwood planter - Should I treat it and how?
2
Why do pink rain lillies flower after rains, but not from being watered? How to make them flower?
4
Why did my hydrangea's flowers die?
3
Why Did My Maidenhair Fern Die Overnight?
0
What am I doing wrong with my camelia?
1
Metrosideros dying (?)