Why are my aloe leaves turning white and brown?

I have had this plant of aloe for years, and it has always given me great satisfaction. Easy to take care of, I had separated it into different pots but now decided to keep it all together into a large one - and it has been a great idea.

It withstood changes in the position too: from a south-facing window sill, when I put it all together it was placed outside on the western porch, receiving a lot of light and it sprouted even more. I brought it in for the winter, and placed it in a well-lit area and it was fine.

However, one day I had the terrible idea of putting it outside in the winter for some sunlight (we had an unusually warm winter) and obviously I forgot to taking it back in at night and obviously it turned out to be the coldest night of the year.

The leaves turned white almost immediately, but the damage was very limited. I thought it was just the cold, so I kept it inside, placed it where it gets a lot of light but no direct sunlight and waited to see if it could get some color back.

It turned worse, as you can see in the pictures. 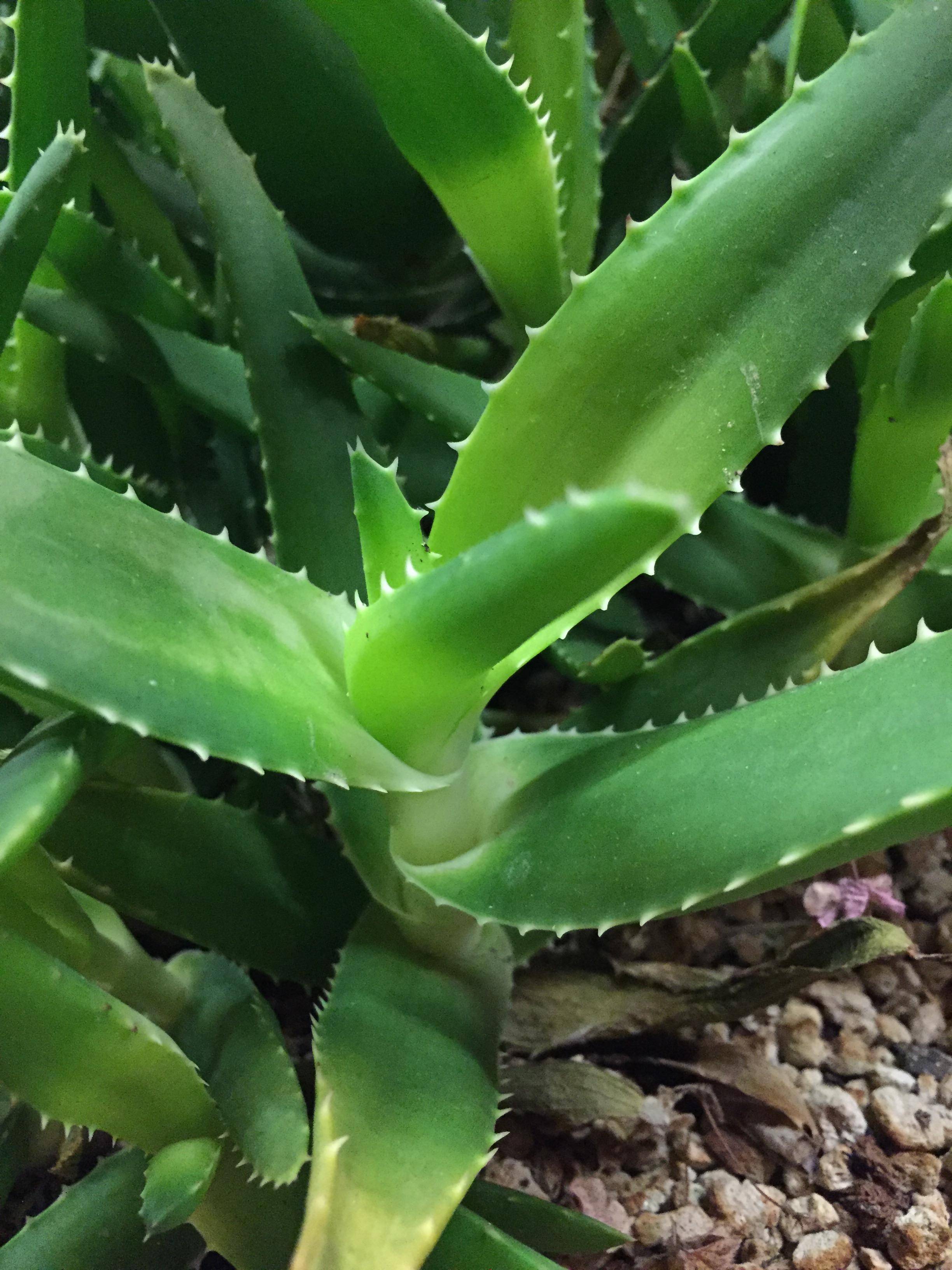 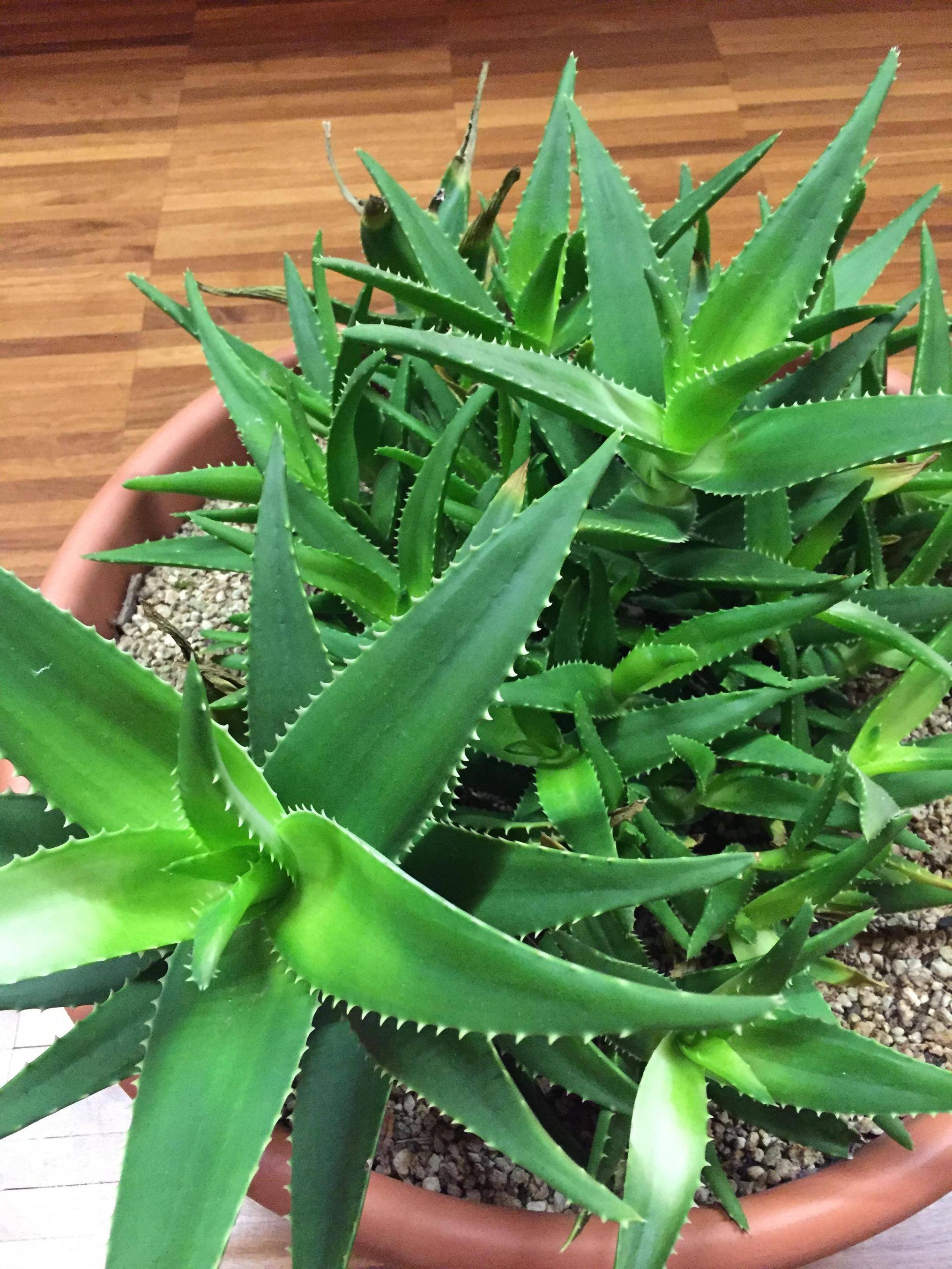 Some even started to brown 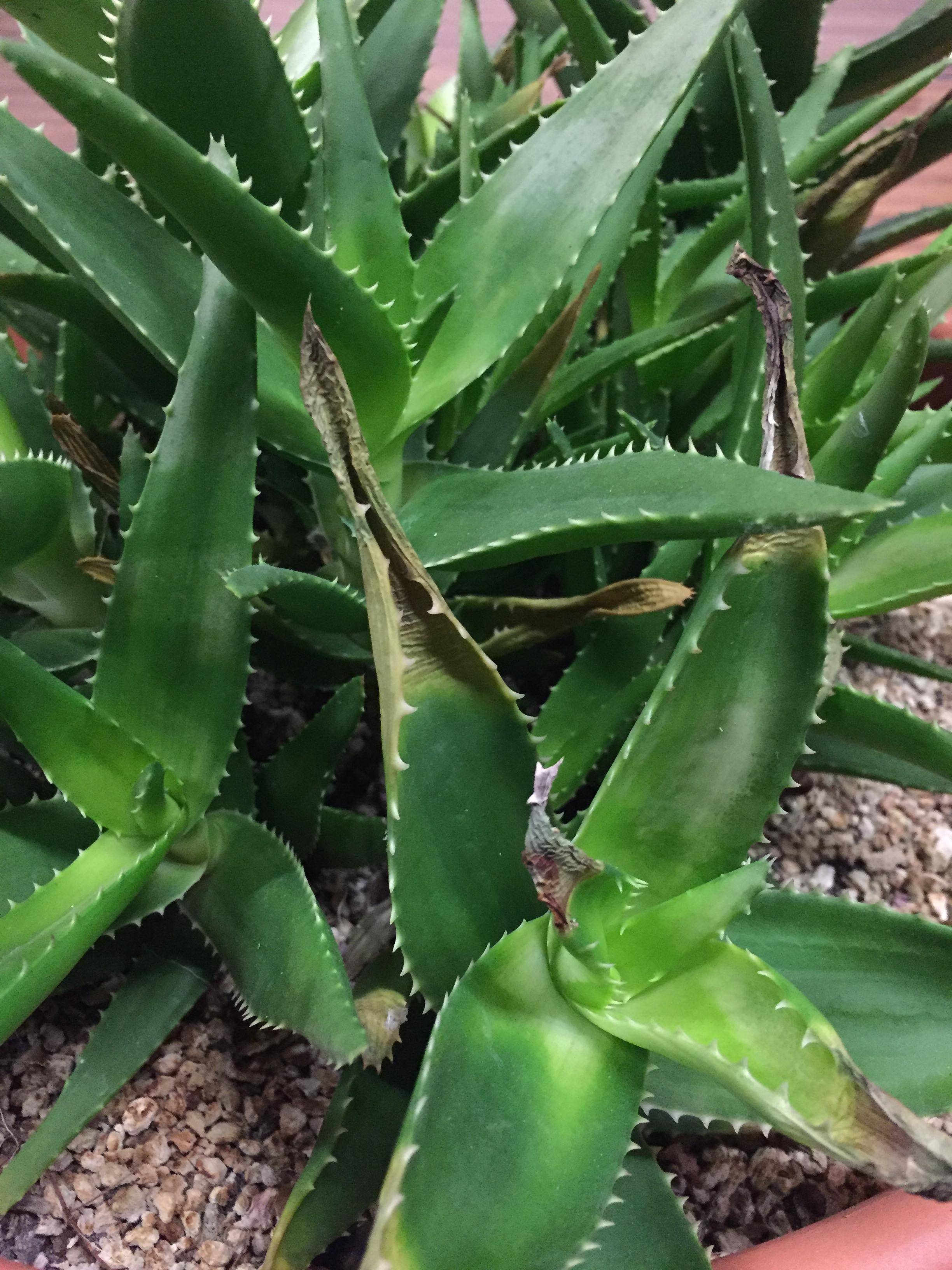 I found this article where they say it could be sunburnt. However I don't know how that's possible, it's been in almost direct sunlight in August and it didn't turn out like this. And I know from this question that the damaged brown leaves will have to be cut.

So finally my question(s):

Is it a sunburnt aloe as the article states? Is the damage recoverable?

First, here is what sunburn looks like on an aloe leaf: 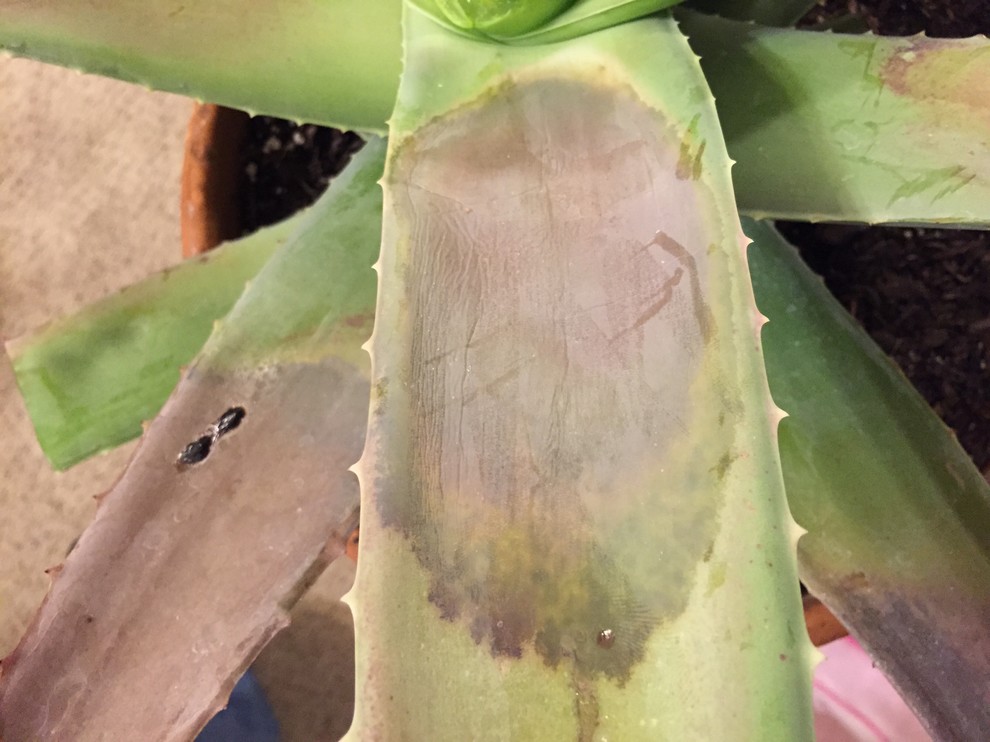 And here is what etiolation looks like on an aloe (this one's actually mine :o): 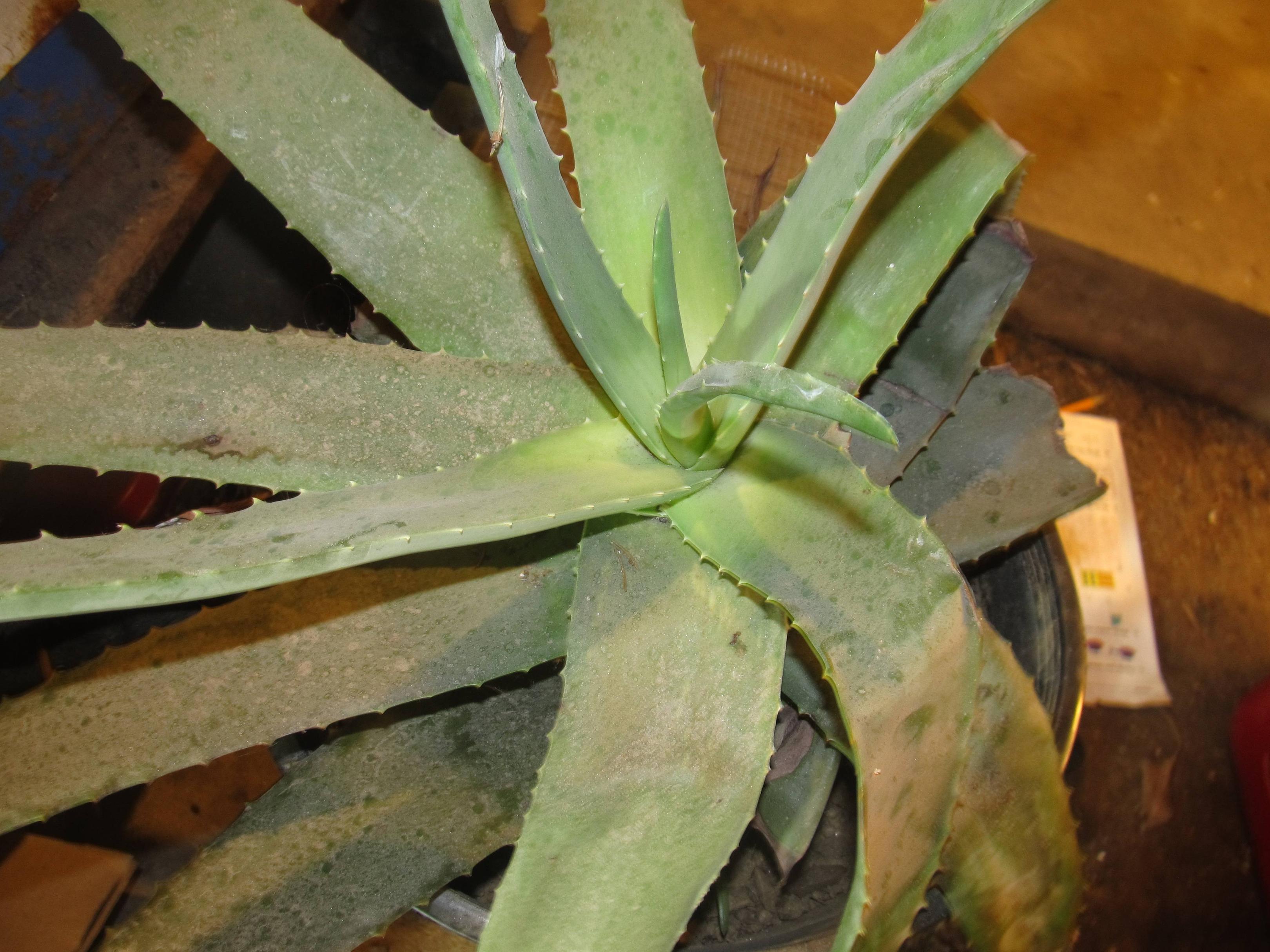 Mine is etiolated because it's in the basement under fluorescent lighting, which is on 24/7. That plus the warm temperatures are confusing to the plant. Mine responded by trying to grow (although I haven't watered it since September of 2014). It stays outside during the summer. Most of mine I treat better than this one.

Here's how to avoid etiolation. If the aloe is kept outdoors over the no frost months (highly recommended), and you don't have an indoor location with several hours of direct sun, the best method of overwintering is to make the plant go dormant. You don't want the plant to grow while dormant, as that growth will not be as robust as summer growth, but will be permanent nonetheless.

Place it in an area that stays between 40 and 60 degrees F., ideally around 50 - 55. Give it bright light for 10 hours a day. That is a very short day and helps the plant 'winterize' naturally. Let the soil just about dry out. Watering will cause growth. You don't want it all as dry as dust, but you're gonna get pretty dang close. Do not fertilize.

You can usually keep the plant healthy in these conditions for at least 4 months, which is enough in most areas to get them through the winter. When moving them outdoors, you will have to harden them off carefully, so as not to sunburn them.

If you have an area indoors with direct sunlight several hours a day, you can keep the aloe there year round, growing constantly. Putting it outdoors for a time (much brighter) and then bringing it back in will throw it off, and can cause etiolation.

Not the answer you're looking for? Browse other questions tagged diagnosis succulents light aloe or ask your own question.

8
Pest, etiolation, soil or overwatering? Other causes of pale-brown tips in Aloe Vera
9
What is 'Etiolation'?
6
How do I make my aloe plant beautiful again?

5
Should I use tap water for my Aloe and Lucky Bamboo?
3
Why are the leaves on my Peace Lily turning yellow and brown?
6
What's the fastest way to dry peat before re-potting an overwatered succulent?
10
Why are the leaves on my mango tree turning brown and drying out?
3
Why are some leaves on my Schefflera turning yellow and falling off?
4
Why does my Dracaena fragrans lose its leaves?
2
Yucca – brown mushy spots on the leaves
7
White and brown spots on cacti
3
Dark green patches on aloe vera
1
Avocado tree leaves turning brown