What are these long, mostly translucent worms in my potted trees?

I buy, re-pot and take care of Norfolk Island Pine trees in my office. They're mostly decorated and displayed around Christmas time, but I take care of them year round and sometimes decorate them for other seasons.

This year I purchased a few and potted them with an organic soil, a fast-draining mix that included sand and pine bark, which is what my trees require. All was normal until this month rolled around.

All of a sudden, after watering my trees and draining the drain trays, these thin, mostly translucent worms would suddenly begin crawling out of the pot and into the drain tray. I'm not really squeamish about this kind of stuff, normally, yet they seem to be multiplying pretty fast. It went from just seeing one in the tray one week, to seeing around eight squirming around the following week. The number is always random. As I said, they're see-through and most of their innards look very black. I also see bits of red/pink and yellow on them. 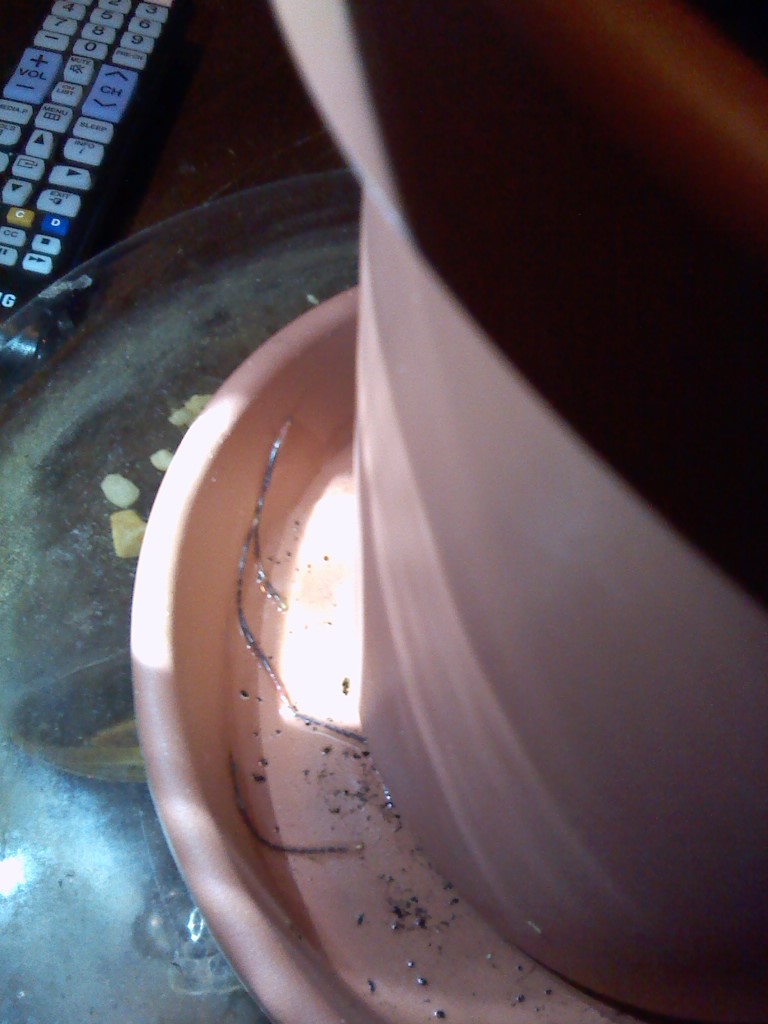 They're starting to really bug me, now. I don't know why they appeared so suddenly, but they're really gross. I have a secondary tray under all of the drain trays for humidity, so I don't really have to worry about them escaping, but I did find one escaped onto my rug when the humidity tray was shallow.

I'm not sure about the specific species, but they appear to be worms from the family Enchytraeidae (commonly known as potworms). They are not earthworms, but similar. They feed on/live in decayed organic matter, and do not harm plants. They need moisture to thrive, and prefer a low pH. When the conditions are right, they tend to multiply rapidly. They are often found in vermicomposting systems.

Control methods are not often attempted, as these do not harm mature plants in any way. Most plants prefer drier soil conditions and higher pH, which would not be suitable for a potworm population explosion. If your plants require these conditions, and you want to remove the potworms, try laying wide slices of raw potato flat on the soil surface. It attracts them, especially at night, and you can pick them out. You can also pick them out as they move into the drain tray.

Not the answer you're looking for? Browse other questions tagged houseplants pest-control potting-soil drainage worms or ask your own question.

9
Translucent worms are growing on my moss, will they move onto other plants?
2
Sansevieria leaves wrinkling and browning
5
Camouflaged worms on indoor plants
3
What plant looks like a Peace Lily but has no flowers?
3
Worms appearing in potted Yucca after watering
2
How can I organically get rid of aphids in my aquaponics system?
5
What exactly is garden soil, and why shouldn't it be used for potted plants?
4
Houseplants keep getting infections
4
English Ivy - browning leaves, what's happening?