How should I prune this overgrown pear tree?

I have a pear tree, which is very zealous. Whatever it decides to do, it does in excess. First in the spring it sends out all sorts of new branches--all of them vertical. I snipped them off after they grew a few feet, but they merely resumed their skyward climb for 10 feet! Then the pear tree flowered and produced tremendous amounts of fruit. All the branches bent over more than a bow and arrow bends. Some of the branches literally snapped under the weight. What can I do to help this poor tree? 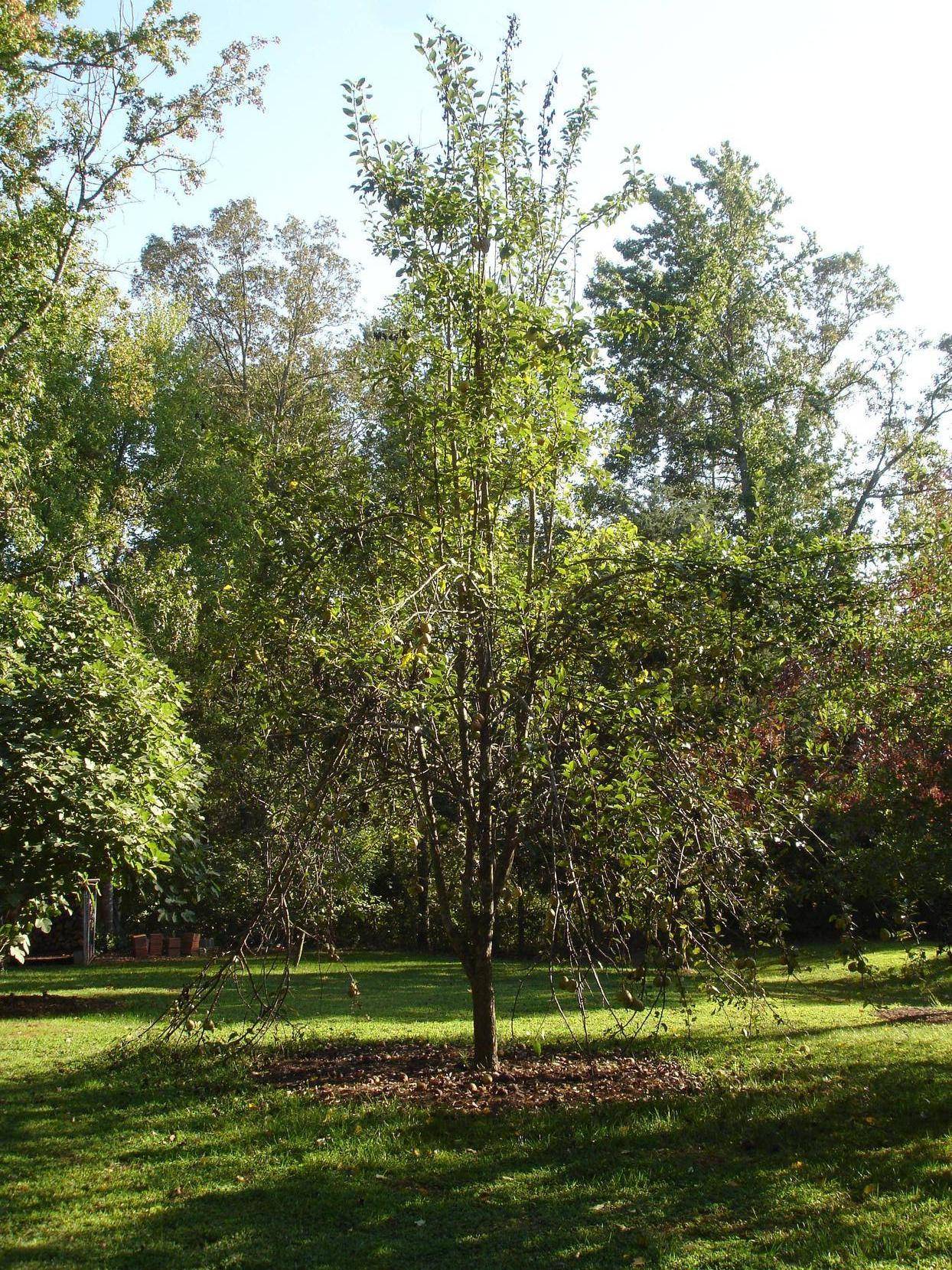 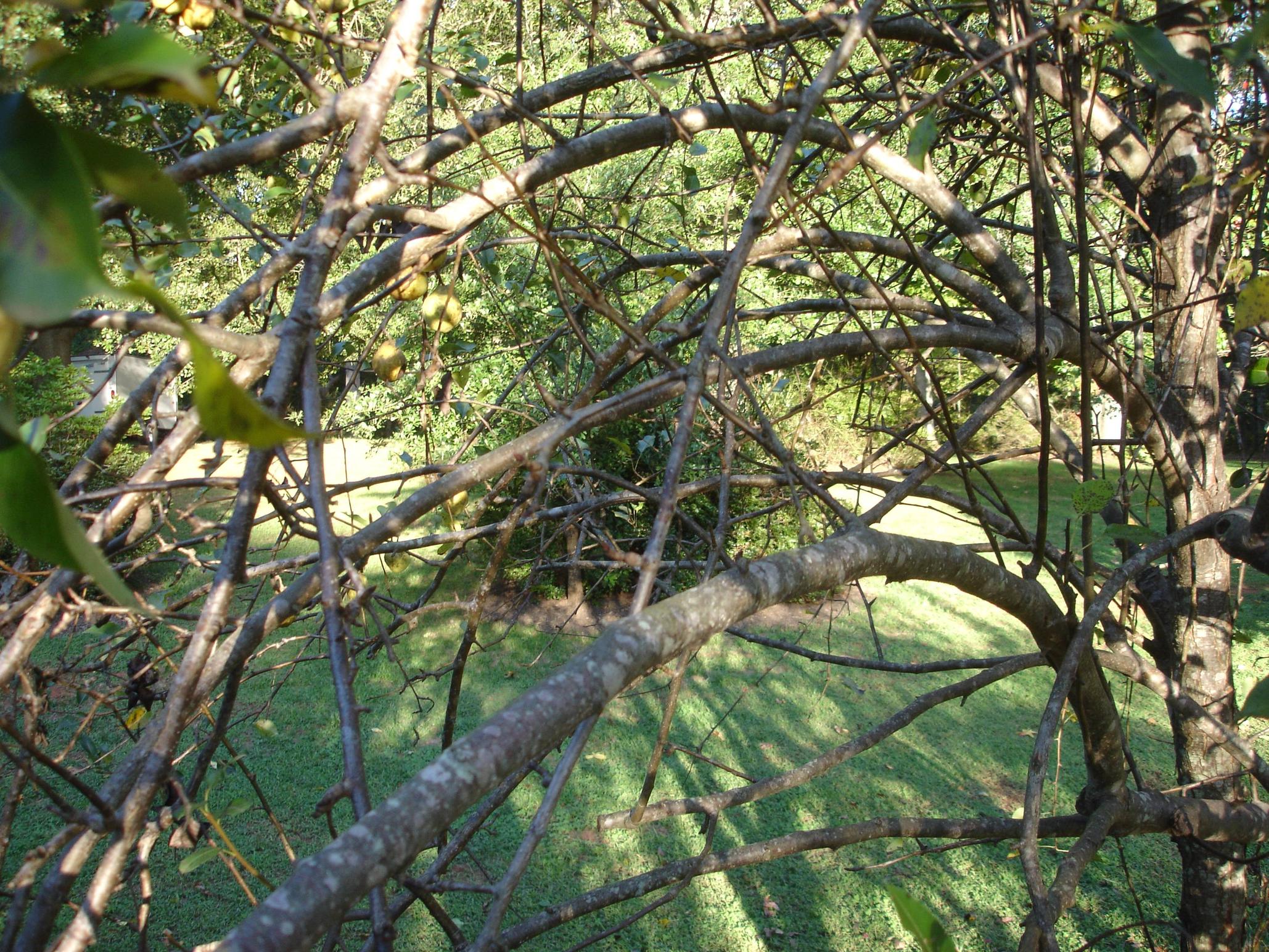 If you are fertilizing this tree, I'd recommend that you stop, it doesn't seem to need any more!

From what I can tell from the photos, it looks like this tree doesn't get full sun -- it looks like there are other trees that might be slightly shading it. This could cause some of the vigorous vertical growth that you see -- it's trying to get up into the sun. (I say this more for understanding than for anything you can do about it, short of cutting down some of the competition...)

In your circumstance, you want to do a summer pruning rather than a winter (dormant season) pruning. The dormant season pruning will stimulate more vigorous growth, when your goal should be instead to open the tree up to let more light in. Just don't prune too late in the season -- since any pruning will stimulate growth, you don't want fresh green growth to be exposed to winter chill. It's best to do it in early/mid summer so that the new growth has a chance to harden off before winter.

Your goal should be to establish "scaffold" branches (these are the main, roughly horizontal branches). There should be about 4-6 distributed evenly around the tree, about 4' in height vertically from one scaffold to the next. (Imagine that you have four scaffold branches at a height of 6' pointing north-south-east-west, and then another four main branches at a height of 10'. I just picked 6' and 10' out of the air -- use what works for your tree.)

If you are trying to control the height, you can cut back the central leader to just above the top scaffold.

When you do have to remove lateral branches, cut them back to the trunk. (Using the scaffold example mentioned above, imagine that there's an extra lateral branch pointing northeast at 6' high, and it's 5' long. Don't just cut it back to 3' long, cut it back where it comes out of the trunk. If you don't prune it all off, it will just keep growing with several extra small branches pointed in that direction, and they'll interfere with the scaffold branch. It looks like you have a few lateral branches that have done exactly this.)

The general pruning advice given in Mike Perry's answer is good, though I'd recommend removing any downward-facing branches. These don't help anything, and they're more likely to break when loaded with fruit.

An addition to the tools he lists there, you might also consider a pole pruner. This is a long, telescoping handled (12-16' or so) pruner to reach tall branches. It has a pruning saw attached to the end. It also has loppers on the end with a rope that you pull to close the shears. Just don't stand under the branch that you're cutting!

Lastly, don't worry about it too much! I've seen apple and pear trees that have been rather neglected that still look good and produce more fruit than a family (or two or three) can possibly use. And in my experience they're resilient in the face of pruning mistakes...

To go along with the information already given by "yoda", the below University Extension Office articles should fill in any missing gaps (eg Vertical shoots, branches that develop each each year):

If after reading those articles you still have any questions unanswered please let us know so we can try our best to address them...

Advice, observations from looking at those 2 photos you've posted:

For an excellent resource on how to prune trees, take a look at the following document from the US Forest Service:

What I did on a apple tree in this type of trouble was cut off the thinner branches, leaving the vigorous sturdy shoots. Then I topped them off at the third main lateral. This slows the tree down and increases the height. Also try to keep the branching thin and airy, and keep the branches that slant down trimmed off to improve the structure.

Not the answer you're looking for? Browse other questions tagged fruit-trees trees pruning tree-care pear or ask your own question.

22
How and when to plant young grafted fruit tree?
18
What should I do with my Cherry trees?
16
Why aren't my fruit/nut trees flowering?
19
How should I prune an overgrown peach tree?
20
What is the proper way to prune a Fig Tree?
8
What time of year to mulch/feed trees?
8
How high should I cut fescue grass?
3
Why did my new pear tree snap hours after planting?

17
How to deal with suckers on a Bradford Pear Tree?
19
How should I prune an overgrown peach tree?
5
Should I pinch early pear blossoms to encourage stronger tree and better season?
9
When is it ok to prune an overgrown apple tree?
4
Should I prune apple/ pear/ nashi tree runners in early summer?
5
Can you coppice a pear tree?
5
What is the proper way to prune a pear tree?
5
Pruning overgrown pear tree
3
Save the Aristocrat Pear tree