How do I use tree roots as a landscaping feature?

I'm sure I saw a site on the Internet that showcased using excavated tree roots as a landscaping feature. I was inspired by the idea of "recycling" a tree stump and its rootball into a rockery garden by dumping a lot of soil onto it which forms pockets of soil between the roots where plants are able to grow. But I can't find anything about this method. Did I dream about this or does anyone know what I am talking about?

I'm having a tree root extracted from my driveway and would like to try this idea, but would like to research more about how to best go about it.

No you didn't dream it, and I'm guessing you might have actually seen the idea on a TV gardening show, that is where I was first made aware of this "Victorian" gardening style...

A stumpery is a garden feature similar to a rockery but made from parts of dead trees. This can take the form of whole stumps, logs, pieces of bark or even worked timber such as railway sleepers or floorboards. The pieces are arranged artistically and plants, typically ferns, mosses and lichens are encouraged to grow around or on them. They provide a feature for the garden and a habitat for several types of wildlife. The first stumpery was built in 1856 at Biddulph Grange and they remained popular in Victorian Britain. 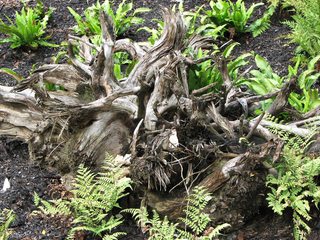 
Listed below are links to helpful and useful articles on the subject of "Stumperies":


Who would have thought stumperies would be the next new, new thing in gardening? Stumperies hail from the 19th-century British Romantic Movement, which rejected the classical forms of the past while exaggerating the glories of nature.

Drawing on their love of ferns and the history of traditional stumperies, Pat and Walt Riehl of Vashon Island have created a modern version of this woodland garden. Among the many attractions are a tunnel entry and grottos full of tree stumps with their gnarly roots reaching for the sky.

Stumperies may be an acquired taste, as much historic and fantastical as they are visual. Yet they're the next new, new thing in gardening, pulled back from their Victorian roots and revived by Prince Charles, who in 1980 installed a garden of sweet chestnut stumps, ferns, and woodland plants at Highgrove, his country estate.

Good luck! and please report back here (post photos, etc) if you do decide to put together your own stumpery...

Sure you can do this. But...dead wood that is damp and in contact with the ground is also the perfect home for carpenter ants. Should you do this just make sure the wood is far, far away from your house.

Not the answer you're looking for? Browse other questions tagged landscaping rock-gardening or ask your own question.

21
How to get the dirt out of the rocks in rock landscaping?
3
How can I make permeable landscaping cloth drain better?
2
How can I remove dirt that has blown into my landscaping rock?
4
Do I need to re-test for radon after landscaping?
4
Why is it called landscaping?
6
Tree roots in storm drain
4
How to start in the landscaping design business?
1
Can I use the gathered sticks from my yard for "to-be-compressed landfill landscaping"?