This is my garden. It is nice. 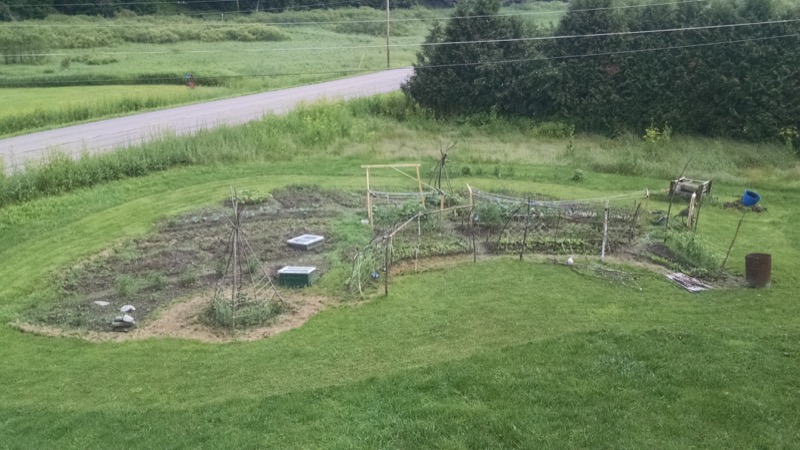 However, as you can see along the road I have a lot of tall weeds growing and one of them is poison parsnip. I'm trying to come up with a good thing that I could plant that would:

Any ideas? I know I can try to fight the parsnip by pulling by hand and such, but the previous owners did that for 7 years and it didn't really get them anywhere. I suspect the town mowers tend to respread seeds up and down the roads, so that seems like a losing battle.

I'm in northern Vermont (zone 3-4). You can see across the road is mostly marsh - this part of my lawn is moist, but not wet. We have some kind of willow bush, black locust and day lilies growing natively nearby. Transplanting individual plants sounds like a lot of work to cover that much area, but that might be reasonable if they could be spaced far enough apart.

In my head, the ideal scenario is some kind of cheap, self seeding/propagating plant that I could scatter seed by hand. Maybe after cutting the spring growth back to the ground, or helped along by a nurse crop?

Rhubarb should work well, if you get a large kind. It has huge leaves that cover the ground around it. I personally consider it ornamental, including when it goes to seed. It should smother out anything else underneath it. Some rhubarb gets quite tall (it may not get huge on the first year, however). I've never grown rhubarb from seed (let alone scattering them), but it does produce lots of seeds. It's not invasive. Rhubarb is a perennial.

Burdock looks similar to rhubarb and might also work (in my opinion, rhubarb would be much better, though). It may also grow well from seed. However, it is invasive (I'm sure it would make appearances in your garden, and your neighbors'), probably doesn't always cover as thickly as rhubarb, and it will produce burrs that may get stuck in your cats' fur. Burdock has many uses, but it was a common and highly invasive weed in my neighborhood years ago back when I had a long-furred cat (too bad I didn't know what it was and what you could do with it back then). It seems to have vanished from our yard, however. You can buy it. Burdock is an annual. So, it'll have to grow again every year. I'm not sure if it'll grow to size fast enough to make a difference, but it might. However, when they reseed, they may not appear in the same spot. So, you'd have to collect the seeds yourself every year and plant them again. All in all, I'm not suggesting burdock so much as I'm saying it might possibly work (with drawbacks).

You could always plant some currant bushes over them. They should grow and smother them in time. They can get pretty tall, although you should probably cut them back once in a while. Currants will spread horizontally through the years, although they may spread by seed, too. I'm not sure how they'll work in your climate, but this is how black currants work in my climate (which is more on the arid side in the summer).

Irises, though not tall, are flowers that may smother them out eventually, with their thick, tuberous roots (don't expect results the same year, though, unless you plant a lot of them).

Snowball bushes (not sure what they're technically called) are pretty tall and nice-looking, and depending on how you let them grow, and perhaps the variety, they can potentially cover the ground quite well with their branches. They are wide in all directions, though (so you may or may not want to put them a little ways away from the road).

Better drainage will help, according to the info on poison parsnip, and likely is a partial cause of your poison parsnip free un-mown areas. Not having been "disturbed" may also be helping those areas, since "quickly colonizing disturbed areas" is one of the characteristics mentioned for poison parsnip.

But that'a lot more work to arrange (starting from a place with poor drainage) than mowing (early enough to avoid seeds setting.)

Any plant that will do what you consider your "ideal scenario" (scatter some seed and it takes over, muscling out the poison parsnip) will be, itself, a noxious weed that you will later regret, and will probably be muscling its way through your garden in short order. I'd suggest religiously cutting the plant (use a long-handled tool) to prevent seeding. Take the long-handled tool on walks up and down the road at the right time of year. Some sources suggest cutting it off just below ground level with a shovel or similar tool (perhaps a dandelion or asparagus tool on a rake-length handle.) This is supposed to prevent re-sprouting while being less trouble than pulling the whole root.

Speculating, possibly dumping a LOT of manure and/or woodchips on this stretch (which will raise the soil up some, providing a limited drainage benefit as well as a bit of smothering/mulch if you really lay it on thick) and then covering it with black plastic all summer to wipe out the present population as best as can be managed, followed by a planting of winter rye. "Wild parsnip" is listed as liking (or being a sign of) depleted soils, so building up the soil might help other things outcompete it (though sometimes "wild parsnip" seems to be used to mean "poison parsnip", and sometimes not...)

Let me give you a more practical solution rather than answer the direct question. I used to live in the Midwest where there are all sorts of predominant ditch weeds.

You aren't going to successfully fight this weed to extinction in your lawn. Though I am not sure why you think you need to unless you have livestock that you are afraid of eating it.

What you want to do is mow the roadside yourself, keep the weeds low so they can't reseed, but more importantly so nothing gets tall enough to attract feeding.

If it was your own lawn, I'd say till it or disc it until the roots just finally give up, but you can't do that roadside because you'll damage your equipment, and the you don't want to disturb the structure of the substrate that's supporting the edge of the road, otherwise you could subvert the road, which would be a bad idea.

Not the answer you're looking for? Browse other questions tagged weed-control plant-recommendations weeds or ask your own question.

29
How can I control thistle in a lawn?
16
What are some good plants to put in a guild built around plums/stone fruit?
6
Keeping my ground cover planting free of unwanted vines and weeds
6
What are good plants for sandy soil?
3
What are good plants for salty, sandy roadside conditions in Maine?
3
Amending a barren yard with compost: dedicated weed barrier or no?
3
Help me make this drainage "ditch" look great
1
Sequencing for tick, weed and fertilize treatments for lawn
1
What kinf of plants can survive only in hydrogel beads?
3
Someone please help identify these two pictures