What are these weeds & how can I prevent them? [closed]

Want to improve this question? Update the question so it focuses on one problem only by editing this post.

In one of my past posts, I asked how to seed my 20 x 25 ft backyard. I had great results by following your recommendations. I also left 1 1/2 ft as a bare ground border, keeping it weeded by pulling anything that popped up. I want to use that for my organic gardening. This past summer I tilled in the grass clippings and vegetable peels from my kitchen.

I'm hoping that the ground will have time to decompose this over the winter, however, toward the end of spring I saw a number of big plants! The first one on the left now has purple berries on it. The one in the middle is a 4 foot giant that popped up out of the blue. It looks like a dandelion on steroids! The last one on the right looks like big crab weeds. Are they just that?

Any idea what these are? Can I eat them? Are they some kind of poison ivy? Can I just pull them and they'll be gone? 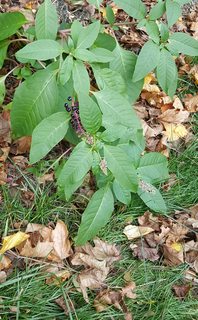 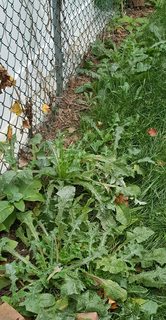 The first photo is pokeweed, Phytolacca americana, a perennial plant native to North America. I would not recommend you eat this plant unless you know exactly how to prepare it to remove it's toxins. I like this plant as an ornamental myself.

The second and, I believe third photo, is spiny sow thistle, Sonchus Asper, and annual or biennial (sometimes a 'winter annual') plant not native to the US and usually considered a weed. It is different than prickly lettuce, Lactuca serriola, in several respects, but notably, it lacks spines on the underside portion of the mid-rib of the leaves, and has numerous florets (hence the dense fluffy seed heads), rather than just 12–20 in L. serriola. Also, he leaf bases are auriculate (with ear-like structures), whereas L. serriola are not. I have both species in my garden. Lactuca serriola is easier to remove, but more numerous. Sonchus Asper is harder to remove, because of the deeper roots, which unless removed, re-sprout. http://www.efloras.org/florataxon.aspx?flora_id=1&taxon_id=200024556

For the third photo, I would not make a definitive ID based solely on this photo. But if they are the same as the one flowering in photo two, then I'm pretty confident on the ID.

Sow thistles are edible, but be careful of the prickles. http://www.eattheweeds.com/sonchus-sow-thistle-in-a-pigs-eye-2/

I had been composing as @Escoce's answer came in; I disagree with some (more than comment would permit) so I'll continue composing...

Picture number one (with rounded leaves and purple/black berries) is indeed pokeweed (Phytolacca americana)... but... DO NOT EAT. It is very poisonous to humans, though there are some birds (which are not affected by the toxins) that eat them. This is a perennial with a taproot, so it can be kept at bay by persistent plucking with reasonable success.

I think the other two are prickly lettuce (Lactula serriola, not dandelion/Taraxacum nor dock/Rumex). In stark contrast to pokeweed, all of these possibilities listed for pictures 2 and 3 (lettuces, dock, dandelion) are quite edible, though do be careful with the prickly lettuce. :) All of these are also perennial taproots (with similar control possibilities), though they do tend to be quite persistent.

I have eaten the third one and effectively it's a dandelion (or lion tooth in my country). It tastes very bitter, but it has medicinal properties such as detoxification of the liver, and you can make honey using the yellow flowers. The whole plant is edible. If you want to remove it you have to extract it with all the root. You have to be very careful because the root is very fragile, so the soil has to be over-watered or you have to dig around the root in order to remove it. I have this book (Health through God's Pharmacy- Maria Treben). In it you can find more information about the dandelions and their healing properties, and also the honey recipe.

The second one is very similar to dandelion. I have never tried it, but the root has the same issues.

The first picture is poke weed. Great for purple ink from the berries. Leaves can be eaten if cooked thoroughly, but are otherwise inedible.

The second picture is dock. Not sure which kind, but most kinds are edible when cooked. They have lots of oaxolic acid (like spinach) and need to be cooked to be edible.

The third picture is one of two very different plants though they look quite alike. One is dandelion, which is quite good in salads when it's young and hasn't flowered yet. The other choice is chicory, which is also good in salads, but you need to make sure you have a good type of chicory before you eat it.

Prevention? Pull the weeds as they grow. The dandelion and chicory will need a weeding fork so you can get the whole taproot out. A weeding fork looks like a backward arrow fletching.