How do I keep house flies away from flowers without harming bees?

Is there a pesticide or other method that can be used to keep flies off of flowers (or kill the flies) but that won't harm bees?

I am in the northeastern US, dense urban area; the flowers are Chrysanthemums, outside, full direct sun, potted, not sure what they are potted in. No other types of flowers around. Flies are mostly house flies and at least two other varieties (blue bottle and flesh), bee species unknown mixed. Flies seem interested only in flowers, mostly the centers but sometimes the petals, not very interested in soil, and they don't hang out on the ground or walls or anywhere else nearby (except by the trash about 20 feet away).

Building is mixed zone residential and commercial. Flies are already an issue with trash but prior to placement of flowers they were at least confined to trash area. There is a day care on premises as well and the flies give it a "dirty" unprofessional feel, and the health department does not want flies around either. There are usually about 20-30 flies on the flowers at any given time, which enter the building and also swarm with foot traffic, general nuisance. The bees generally ignore humans and are pleasant to have around and help out the flowers, and there's only about 2-4 at any given time (but the flies seem to have pushed them out). 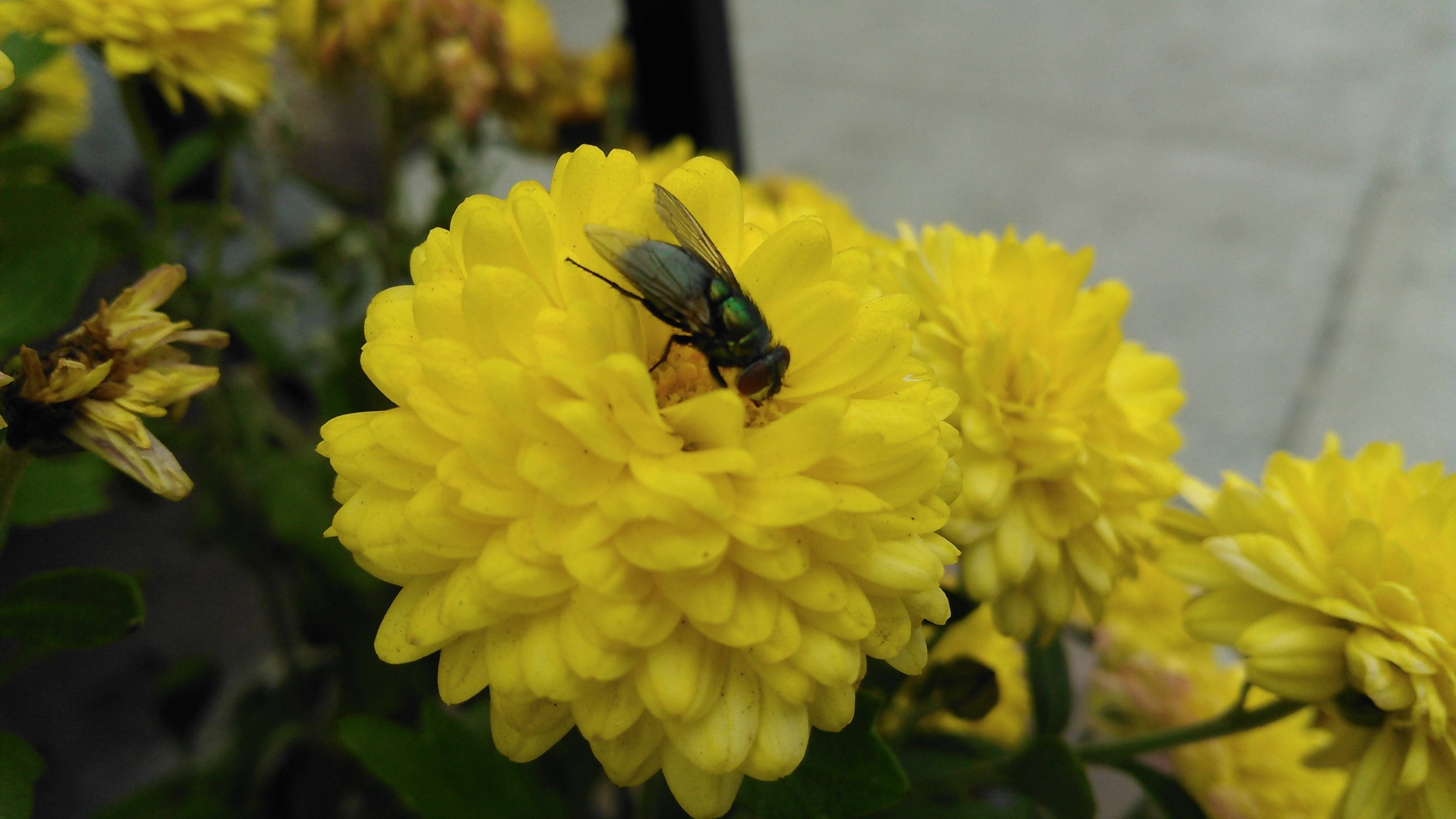 I don't think there's much you can do to reduce the presence of the flies (bluebottle type by the look of it). They do pollinate plants to a degree, and they prefer strong smelling plants, particularly those in full sun, and especially at this time of year, in fall, just before winter, when temperatures are falling. What's important is whether they only congregate on the flowers, or whether they're attracted to the soil or just the area where the pots are generally. They may just be sticking to sunlit areas, but there may also be something in the potting medium that's attracting them, like bonemeal does.

Any treatments you use will also affect bees and hoverflies, unfortunately. If its not something in the potting medium, then its the flowers themselves, and the fact they're in full sun.

Not the answer you're looking for? Browse other questions tagged flowers pest-control insects or ask your own question.

20
Insect infestation on my pepper plant, what do I do?
5
Control aphids on a linden tree
3
How do I keep opossums away from my lawn?
4
How can I mitigate azalea lacebug infestation without harming bees?
4
How to prevent insects coming to a water-puddle
14
Can Marigold flowers keep animals away?
10
Treating Azaleas without harming Bees
4
How to keep away Forficula auricularia from cabbages?
0
Can I save orchids infested with scale insects?